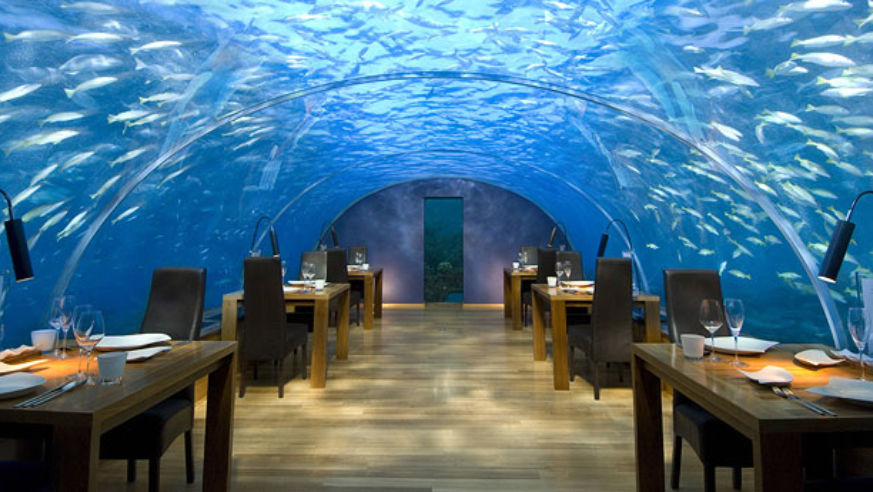 Dining at these eight outlandish restaurants&mdash;with names like Modern Toilet, the Clinic, and Dinner in the Sky&mdash;might be more memorable than palatable.

Sky high
Looking to take your food to new heights? Try 164 feet in midair. Dinner in the Sky hosts parties of up to 22 people on a 30-foot-by-16-foot platform hoisted by a crane. Guests are attached to the chairs with harness-like seat belts; there's space for three staff members to move about in the center of the platform. Events last eight hours, which guests can divide however they like, opting to have one long meal with the same dining companions, or several shorter tastings that allow guests to switch out every time the crane is lowered. Catering isn't included, so the menu's up to you. dinnerinthesky.com.

…Or under the sea
Scared of heights? Maybe Ithaa, at the Conrad Maldives Rangali Island resort, is more on your wavelength. Sixteen feet below sea level, the seven-table restaurant with minimalist decor is tucked inside a transparent acrylic tunnel, so guests can watch sea life swimming by as they savor the Western-fusion fare (dressed-up curries and, of course, seafood—including the very black cod, legend fish, and rainbow runner you see swimming overhead). You may even be lucky enough to spot manta rays winging past. And there's no need to worry about a Jaws 3–like aquarium collapse: The tunnel is so structurally sound that it stood up to the 2004 tsunami in the Indian Ocean. The space only has room for 14 people, though, so make reservations at least two weeks in advance. conradhotels1.hilton.com.

Potty on
It's anyone's guess how combining the kitchen and the bathroom—the two rooms in the house that should have as little to do with each other as possible—proved a successful venture. But somehow, Taiwan's Modern Toilet is so wildly popular that after just six years in business, it has 12 locations throughout Asia, including in Hong Kong. Guests sit on toilets (lids down, to guard against the literal-minded) and eat out of dishes shaped like toilets, sinks, and bathtubs. The menu of noodle soups and Indian curries might look appetizing if not for the presentation. If you can stomach the grand finale—soft-serve chocolate ice cream brought to your table in a miniature toilet bowl—this is the place for you. moderntoilet.com.tw.

Just what the doctor ordered
Hospitals aren't exactly known for offering tasty food—let alone cocktails—but that didn't stop designers from going with a medical theme when they invented The Clinic, in downtown Singapore's Clarke Quay district. Made up of several pill-shaped bars, lounge areas, and a dance floor called Morphine, the club is adorned with a mix of drug paraphernalia and hospital equipment—plus pills, drips, wheelchairs, operating tables—with 15 original, medical-themed works by pop artist Damien Hirst. The waitstaff, dressed in hospital whites, serves food in stainless-steel, kidney-shaped dishes; the drinks come in syringes and IV bags. Sipping the deep-red Sex on a Drip from the tube of a blood bag is simultaneously sobering and intoxicating. theclinic.sg.

Our chef, who art in heaven
You don't have to be Christian to eat at Japan's Christon Cafe. In fact, most of the customers aren't there for a dose of religion at all; they just appreciate a good theme restaurant. The eight locations are designed to look like churches, with details like vaulted ceilings, stained-glass windows, and real altars, including one that's been converted into a bar. The menu is served izakaya-style, on small plates, and includes dishes like Japanese beef carpaccio and baked risotto cake with a foie gras "steak" on top. To drink, choose from the extensive wine list, or go for one of the signature cocktails named for saints and sinners, such as the Joan of Arc (vodka, ginger ale, and raspberry) or the Small Devil, a drink made with strawberry cream and cassis.

Coolest. Restaurant. Ever.
A lot of restaurants do annual updates, but rebuilding the entire thing every year? That's the drill at SnowCastle, in Kemi, Finland—nine hours north of Helsinki. About the size of a Walmart Supercenter, the world's largest ice castle has changed its shape each year since its debut in 1996. Made of ice elegantly sculpted into sweeps and arcs, the complex—which includes a restaurant, a chapel, and a hotel—has an ethereal blue glow, making it feel like a real-life winter wonderland. Come springtime, it melts to the ground, and every winter, it gets built again. Bundle up before eating at the SnowRestaurant: The temperature inside hovers around a bone-chilling minus 5 degrees Celsius. Thankfully, there are some warming touches: reindeer-fur-covered seats and hearty prix fixe menus, all of which begin with soup. snowcastle.net/en.

Cuisine to kill for
You probably don't have "jail" on your list of places to visit in Italy, but you might want to make an exception for Fortezza Medicea. The maximum-security prison near Pisa runs a restaurant staffed by inmates—and we're not just talking petty thieves. The people cooking and serving your food are convicted murderers and mafia men. Despite the fortresslike exterior—and the armed security guards lining the place—the restaurant feels surprisingly normal. The lights are dim, the tables draped with elegant red tablecloths, and the all-vegetarian menu—mostly southern Italian staples like pasta with tomato-based sauces—is delightful. It's easy to forget that the guy refilling your wineglass is doing life for murder. volterratur.it.

Sword-ed affair
When a sword-toting ninja dressed in black greets you at the door at Ninja New York, you know this is no ordinary Japanese restaurant. In the "secret" passageway leading to your private table, hidden ninjas are likely to drop from the ceiling at any moment. The menu, written on a scroll, is made up primarily of what the restaurant calls Ninja Art dishes, which seem to be another way to give a Japanese-fusion twist to global favorites like foie gras and marinated monkfish. The grapefruit-and-crab salad wins for dramatic effect: When you pull the metal sword from the center of the dish, smoke billows out (it's really dry ice). And don't skimp on the tip, either—ninjas are notorious for seeking revenge. ninjanewyork.com.