Wikipedia
Tuscaloosa ( TUS-kə-LOO-sə) is a city in and the seat of Tuscaloosa County in west-central Alabama, United States, on the Black Warrior River where the Gulf Coastal and Piedmont plains meet. Alabama's fifth-largest city, it had an estimated population of 101,129 in 2019. It was known as Tuskaloosa until the early 20th century. It is also known as the Druid City because of the numerous water oaks planted in its downtown streets since the 1840s. Incorporated on December 13, 1819, it was named after Tuskaloosa, the chief of a band of Muskogean-speaking people defeated by the forces of Spanish explorer Hernando de Soto in 1540 in the Battle of Mabila, in what is now central Alabama. It served as Alabama's capital city from 1826 to 1846. Tuscaloosa is the regional center of industry, commerce, healthcare and education for the area of west-central Alabama known as West Alabama; and the principal city of the Tuscaloosa Metropolitan Statistical Area, which includes Tuscaloosa, Hale and Pickens counties. It is the home of the University of Alabama, Stillman College and Shelton State Community College. While it attracted international attention when Mercedes-Benz announced on September 30, 1993 that it would build its first North American automotive assembly plant in Tuscaloosa County, the University of Alabama remains the city's dominant economic and cultural engine, making it a college town. City leaders adopted the moniker "The City of Champions" after the Alabama Crimson Tide football team won the BCS National Championship in their 2009, 2011, 2012, 2015, 2017 and 2020 seasons. In 2008, Tuscaloosa hosted the USA Olympic Triathlon trials for the Beijing Games. Through the 2000s and 2010s, it has been declared the "Most Livable City in America", one of America's "100 Best Communities for Young People", one of the "50 Best College Towns", and one of the "Best Places to Launch a Small Business".
Find more things to do, itinerary ideas, updated news and events, and plan your perfect trip to Tuscaloosa
ADVERTISEMENT 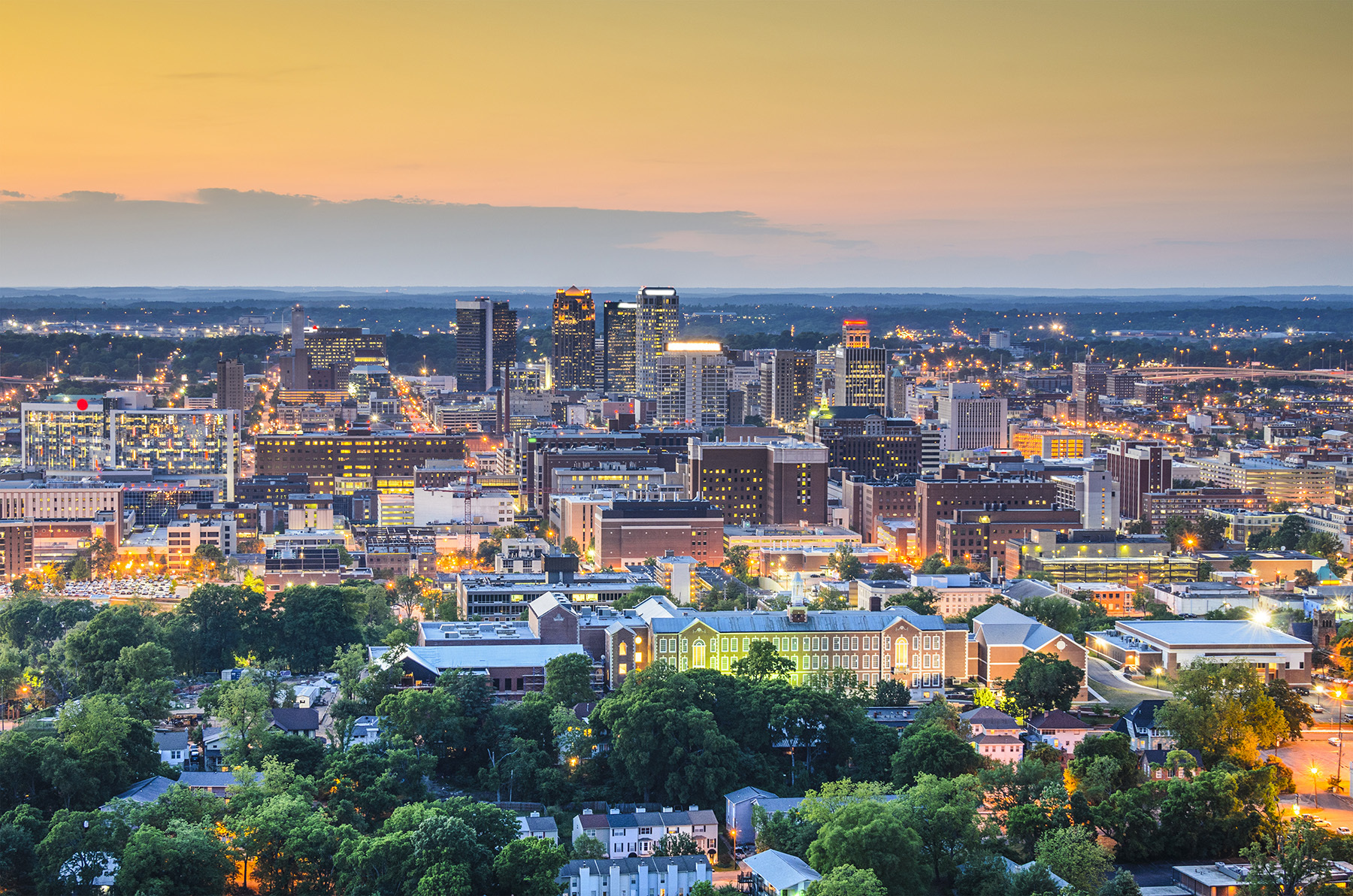 Birmingham ( BUR-ming-ham) is a city in the north central region of the U.S. state of Alabama. Birmingham is the seat of Jefferson County, Alabama's most populous and fifth largest county by area. As of 2018, the Birmingham-Hoover metropolitan area had a population of 1,151,801, making it the most populous in Alabama and 49th-most populous in the United States. Birmingham serves as an important regional hub and is associated with the Deep South, Piedmont, and Appalachian regions of the nation. Birmingham was founded in 1871, during the post-Civil War Reconstruction period, through the merger of three pre-existing farm towns, notably, former Elyton. It grew from there, annexing many more of its smaller neighbors, into an industrial and railroad transportation center with a focus on mining, the iron and steel industry, and railroading. Birmingham was named for Birmingham, England, UK; one of that nation's major industrial cities. Most of the original settlers who founded Birmingham were of English ancestry. In one writer's view, the city was planned as a place where cheap, non-unionized, and African-American labor from rural Alabama could be employed in the city's steel mills and blast furnaces, giving it a competitive advantage over industrial cities in the Midwest and Northeast.From its founding through the end of the 1960s, Birmingham was a primary industrial center of the South. The pace of Birmingham's growth during the period from 1881 through 1920 earned its nicknames The Magic City and The Pittsburgh of the South. Much like Pittsburgh, Birmingham's major industries were iron and steel production, plus a major component of the railroading industry, where rails and railroad cars were both manufactured in Birmingham. In the field of railroading, the two primary hubs of railroading in the Deep South were nearby Atlanta and Birmingham, beginning in the 1860s and continuing through to the present day. The economy diversified during the later half of the twentieth century. Though the manufacturing industry maintains a strong presence in Birmingham, other businesses and industries such as banking, telecommunications, transportation, electrical power transmission, medical care, college education, and insurance have risen in stature. Mining in the Birmingham area is no longer a major industry with the exception of coal mining. Birmingham ranks as one of the most important business centers in the Southeastern United States and is also one of the largest banking centers in the United States. In addition, the Birmingham area serves as headquarters to one Fortune 500 company: Regions Financial, along with five other Fortune 1000 companies. In higher education, Birmingham has been the location of the University of Alabama School of Medicine (formerly the Medical College of Alabama) and the University of Alabama School of Dentistry since 1947. Since that time it has also obtained a campus of the University of Alabama, University of Alabama at Birmingham (founded circa 1969), one of three main campuses of the University of Alabama System. It is also home to three private institutions: Samford University, Birmingham-Southern College, and Miles College. Between these colleges and universities, the Birmingham area has major colleges of medicine, dentistry, optometry, pharmacy, law, engineering, and nursing. The city has three of the state's five law schools: Cumberland School of Law, Birmingham School of Law, and Miles Law School. Birmingham is also the headquarters of the Southeastern Conference, one of the major U.S. collegiate athletic conferences.

Shelby County is located in the central portion of the U.S. state of Alabama. As of the 2020 census the population was 223,024. The county seat is Columbiana. The largest city is Alabaster. The county is named in honor of Isaac Shelby, Governor of Kentucky from 1792 to 1796 and again from 1812 to 1816. Shelby County is included in the Birmingham–Hoover, AL Metropolitan Statistical Area. 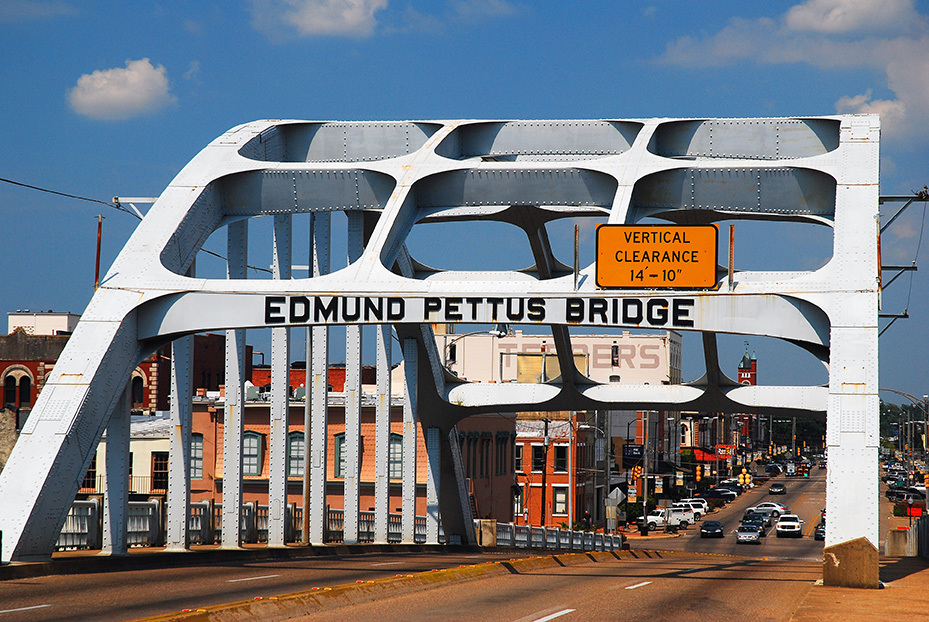 Selma is a city in and the county seat of Dallas County, in the Black Belt region of south central Alabama and extending to the west. Located on the banks of the Alabama River, the city has a population of 20,756 as of the 2010 census. About 80% of the population is African-American. Selma was a trading center and market town during the antebellum years of King Cotton in the South. It was also an important armaments-manufacturing and iron shipbuilding center for the Confederacy during the Civil War, surrounded by miles of earthen fortifications. The Confederate forces were defeated during the Battle of Selma, in the final full month of the war. In modern times, the city is best known for the 1960s civil rights movement and the Selma to Montgomery marches, beginning with "Bloody Sunday" in 1965 and ending with 25,000 people entering Montgomery at the end of the last march to press for voting rights. This activism generated national attention for social justice and that summer, the Voting Rights Act of 1965 was passed by Congress to authorize federal oversight and enforcement of constitutional rights of all American citizens. Due to agriculture and industry decline, Selma has lost about a third of its peak population in the 1960s. The city now is focusing its income on tourism for its major influence in civil rights and desegregation. Selma is also one of Alabama's poorest cities with an average income of $35,500, which is 30% less than the state average. Selma also has a high poverty rate with one in every three residents in Selma being in poverty.