Wikipedia
Pella is a city in Marion County, Iowa, United States, with a population of 10,464 at the time of the 2020 U.S. Census. Founded by immigrants from the Netherlands, it is forty miles southeast of Des Moines. Pella is the home of Central College, as well as several manufacturing companies, including Pella Corporation and Vermeer Manufacturing Company. 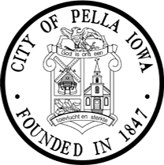 Find more things to do, itinerary ideas, updated news and events, and plan your perfect trip to Pella
ADVERTISEMENT

Ottumwa (; ə-TUM-wə) is a city in and the county seat of Wapello County, Iowa, United States. The population was 25,529 at the time of the 2020 U.S. Census. Located in the state's southeastern section, the city is split into northern and southern halves by the Des Moines River.

Des Moines ( (listen)) is the capital and the most populous city in the U.S. state of Iowa. It is also the county seat of Polk County. A small part of the city extends into Warren County. It was incorporated on September 22, 1851, as Fort Des Moines, which was shortened to "Des Moines" in 1857. It is located on, and named after, the Des Moines River, which likely was adapted from the early French name, Rivière des Moines, meaning "River of the Monks". The city's population was 214,133 as of the 2020 census. The six-county metropolitan area is ranked 83rd in terms of population in the United States with 699,292 residents according to the 2019 estimate by the United States Census Bureau, and is the largest metropolitan area fully located within the state. A portion of the larger Omaha, Nebraska, metropolitan area extends into three counties of southwest Iowa.Des Moines is a major center of the US insurance industry and has a sizable financial services and publishing business base. The city was credited as the "number one spot for U.S. insurance companies" in a Business Wire article and named the third-largest "insurance capital" of the world. The city is the headquarters for the Principal Financial Group, the Meredith Corporation, Ruan Transportation, TMC Transportation, EMC Insurance Companies, and Wellmark Blue Cross Blue Shield. Other major corporations such as Wells Fargo, Voya Financial, Nationwide Mutual Insurance Company, ACE Limited, Marsh, Monsanto, and Corteva have large operations in or near the metropolitan area. In recent years, Microsoft, Hewlett-Packard, and Facebook have built data-processing and logistical facilities in the Des Moines area. Des Moines is an important city in U.S. presidential politics; as the state's capital, it is the site of the first caucuses of the presidential primary cycle. Many presidential candidates set up campaign headquarters in Des Moines. A 2007 article in The New York Times said, "If you have any desire to witness presidential candidates in the most close-up and intimate of settings, there is arguably no better place to go than Des Moines."

Marshalltown is a city in, and the county seat of Marshall County, Iowa, United States. It is located along the Iowa River. The population was 27,591 in the 2020 census.