Wikipedia
Lake Charles (French: Lac Charles) is the fifth-largest incorporated city in the U.S. state of Louisiana, located on Lake Charles, Prien Lake, and the Calcasieu River. Founded in 1861 in Calcasieu Parish, it is a major industrial, cultural, and educational center in the southwest region of the state. As of the 2020 census, Lake Charles's population was 84,872. It is considered a regionally significant center of petrochemical refining, gambling, tourism, and education, being home to McNeese State University and Sowela Technical Community College. Because of the lakes and waterways throughout the city, metropolitan Lake Charles is often called the Lake Area.
Find more things to do, itinerary ideas, updated news and events, and plan your perfect trip to Lake Charles
ADVERTISEMENT
Omaze 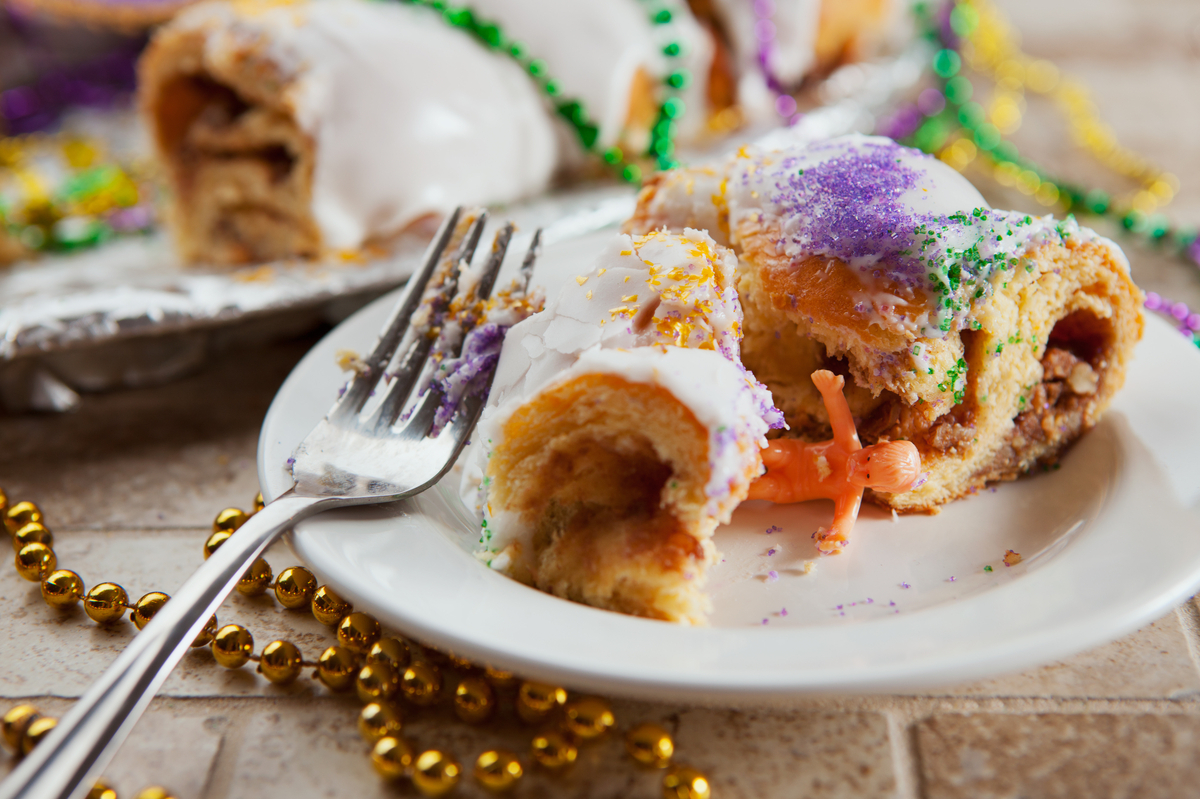 There are bakeries across the American South that ship their creations of this oval-shaped and tri-hued dessert across most of the U.S. Often many of them maintain the traditional king cake recipe of a brioche base adorned with white icing and gold, green and purple colored sugaring. Others have experimented with more contemporary versions and fill them with cream cheese or fruit flavors and go all out with toppings. And most bakeries can process mail orders to send a king cake right to your doorstep. Louisiana Of course, Louisiana is synonymous with Mardi Gras and has many bakeries that ship king cakes. New Orleans In New Orleans, Gracious Bakery + Café’s King Cake Mix is available for purchase online. The artisan bakery has boxed up what’s needed for making a king cake in your kitchen; you just need to add in the wet ingredients. Randazzo’s Camellia City Bakery in Slidell sells out quickly on its king cake shipping orders. Upon seeing their webpage, you’ll know the reason why. Theirs range from traditional to ones filled with cream cheese or topped with pecans. Brennan's in New Orleans is famous for its bananas foster but for 2022 Mardi Gras the fine dining restaurant is shipping three special king cake varieties. They are traditional, a Chocolate “Black & Gold”, “Pink Parade” Strawberry Cream Cheese and Banana Foster. courtesy of Brennan’s Gambino’s Bakery, a NOLA longtimer, has king cake specialty packs with Mardi Gras attire to don while dining on this dessert, among other choices. Cannata’s Market in Houma has a RougaGooey King Cake adorned with Louisiana roasted pecans and cane sugar, white chocolate, and gooey butter along with Mardi Gras beads. Another reason to buy this cake: a donation from its sale goes to the South Louisiana Wetlands Discovery Center. Among its king cakes, Cajun Pecan House in Cutoff has a popular cinnamon-pecan flavored king cake. Or splurge on king cake carnival packs, having the King Cake story, Mardi Gras beads, doubloons and a porcelain mask. NOLA’s Haydel’s Bakery broke the Guinness World Record for the world’s largest king cake in 2010, by creating two giant rings that wrapped around the Superdome. Haydel’s king cakes include traditional or filled with cream cheese, German chocolate and other choices. Also in NOLA, Adrian’s Bakery sends out king cake choices including Bavarian cream, lemon, pineapple and praline. Lake Charles Delicious Donuts & Bakery in Lake Charles takes mail orders by phone. Their king cakes choices involve their pecan and praline along with fruit or cream fillings with choices including cream cheese, apple, blueberry, cherry, and strawberry. Baton Rouge In Baton Rouge, The Ambrosia Bakery sells mini, small, and large versions of its traditional king cake along with a Zulu King Cake with a coconut, cream cheese and chocolate morsel filling. Lafayette Crystal Weddings in Lafayette has an alphabet of king cake flavor options, from almond amaretto to strawberry cream cheese. Also in Lafayette, Poupart Bakery ships both a traditional French king cake--a round puff pastry with almond filling--and the Mardi Gras king cake. Alabama courtesy of Lighthouse Bakery Mobile, Alabama also celebrates this pre-Lenten festival. The Lighthouse Bakery in Dauphin Island, Ala. ships their baby king cakes by mail but requires orders to be placed over the phone during business hours. Texas Galveston has both the largest Mardi Gras celebration in Texas and the third largest one in the nation behind New Orleans and Mobile. Both the Maceo Spice and Import Company and Gypsy Joynt take orders over the phone for shipping king cakes. In Houston, which also honors Mardi Gras, Rao’s Bakery ships king cakes with traditional cinnamon or strawberry, blueberry and raspberry fillings; mini king cakes are also available. 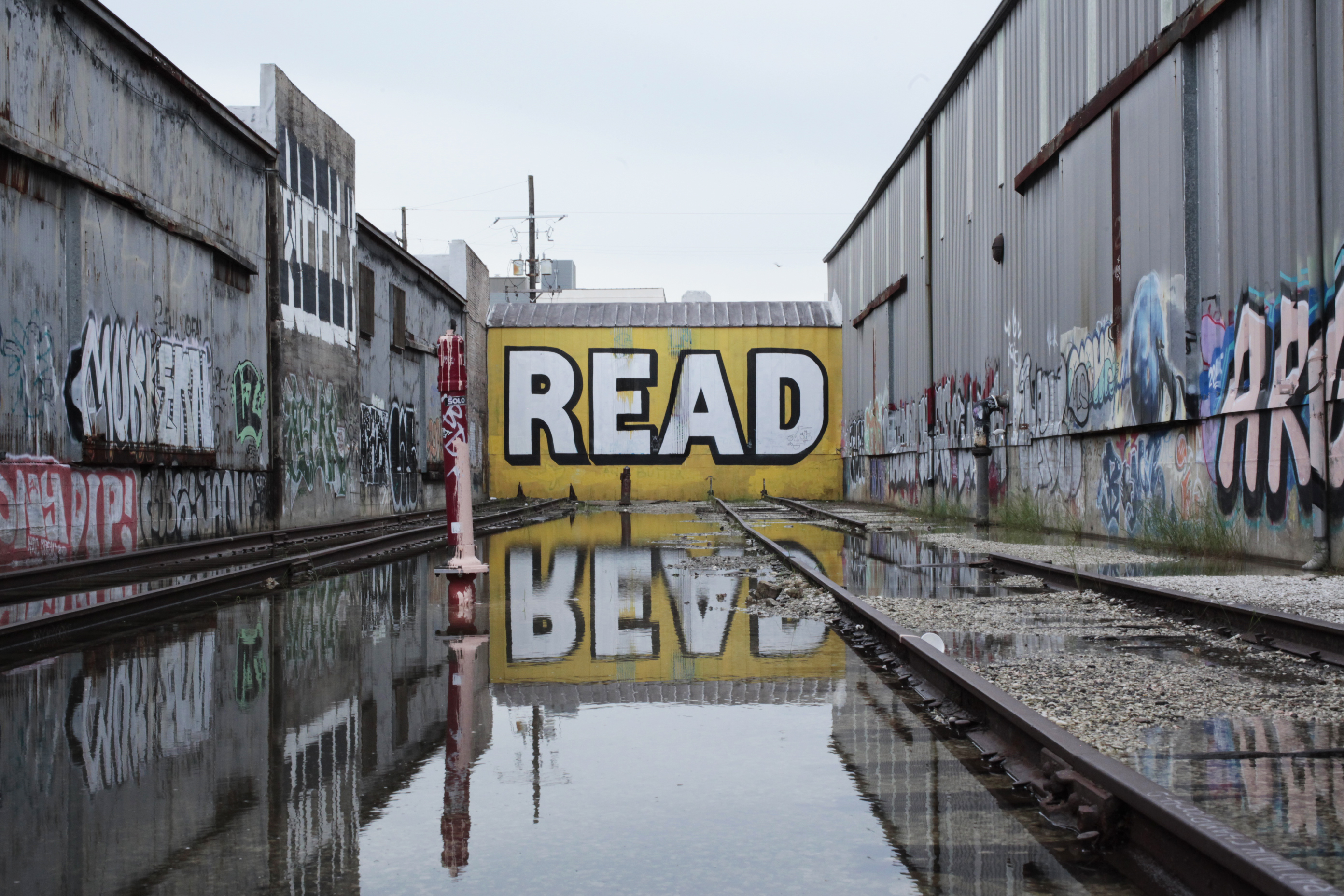 Hop in the passenger's seat on the ultimate road trip! We're posting real-time dispatches as Budget Travel's Photo Editor, Whitney Tressel, journeys across the country using tips from locals as her guide. Prepare for beautiful beaches and parks, amazing local cuisine, and one-of-a-kind experiences you only get when you talk to the real Americans who make this country great. Swinging low from Baton Rouge to N'awlins and back up again to Slidell via I-10, Whitney found herself deep in southern Louisiana, where the pace is slow, the food is sinfully indulgent, and Lake Charles–born singer-songwriter Lucinda Williams's album Car Wheels on a Gravel Road can almost function as a road map in itself. If you've been to NOLA, you're probably no stranger to Cafe Du Monde's confectioner's sugar–dusted beignets. But we've got a new little-known pastry haven to put on your itinerary: On the advice of a photographer couple, Whitney coasted north, toward Lake Ponchartrain, to Morning Call Coffee Stand, which serves beignets off the beaten track (a.k.a. no long lines of tourists waiting patiently to shake their bags of doughnuts and/or steal your table). After Whitney placed her order, three beignets appeared on a white plate, plump and golden, a sugar shaker at the ready. After giving them a good powdery coat, she bit into the first one. Bliss. Sugar State bliss. Terrifically convenient for a post-breakfast stroll, this outpost of Morning Call is located in City Park, a stretch of nature where seas of purple and orange wildflowers paint the ground—a veritable rainbow resting beneath the trees. Think of the blooms as New Orleans's version of D.C.'s cherry blossoms. Totally worth the trip. The French Quarter, particularly Magazine Street, is a classic stop, and Whitney spent time there snapping shots of the iconic architecture. East of the French Quarter, though, she discovered the Faubourg Marigny neighborhood—Frenchmen Street in particular, a multi-block avenue with smaller blocks jutting out of it. One could say the Faubourg Marigny and Bywater 'hoods are the "new" French Quarter: edgier areas with street art (like the mural above) and gobs of live music. As Whitney walked, a lonely country boy crooned on one side of the street, a jazz singer played the piano on the other, and a singer-songwriter with two guitars appeared later down the road. It was, she says, like changing the radio station every 10 steps. Whitney couldn't leave the south without having a po'boy, and she got her chance in Fairhope, Alabama, at Down by the Bay Cafe, a family-run restaurant that Whitney chose partially out of nostalgia for the classic children's song. (Sure enough, that's what it was named after.) She ordered up a half-catfish, half-shrimp po'boy, "dressed," as one must specify in the south, with lettuce, tomato, and sauce (at Down by the Bay, it's tartar sauce, but other establishments differ). Whitney ate every piece of it. On clear days, you can see the Mobile, Alabama, skyline from the restaurant. After you eat your po'boy, walk down to North Beach Park for a stroll. Admire the ducks while you're there. Whitney continued heading east on I-10 and sought some advice from the front-desk attendant (and Florida State University student) at her hotel in Tallahassee, who gamely agreed to share her secret retreat with BT: While driving on I-10, take Route 27 about two and a half miles south, through suburban Tallahassee. Before you know it, Lake Ella will appear on your left. Grab a cup of joe at Black Dog Cafe and take a seat next to the water. It's a mini sanctuary in the city. Whitney's Travel Tip: Fight the urge to rely solely on internet reviews to determine what's good. Instead, ask the locals. Without their in-person advice, Whitney never would have found those mouth-watering beignets in New Orleans or a hidden lake in Tallahassee. Next stop: The East Coast home stretch. Previously:#BTRoadTrip: Del Rio, Texas, to Baton Rouge, Louisiana#BTRoadTrip: Tucson to Del Rio, Texas#BTRoadTrip: San Diego to Tucson#BTRoadTrip: Los Angeles to San Diego

Jefferson Davis Parish (French: Paroisse de Jefferson Davis) is a parish located in the U.S. state of Louisiana. As of the 2010 census, the population was 31,594. The parish seat is Jennings. Jefferson Davis Parish is named after the president of the Confederacy during the American Civil War, Jefferson Davis. It is located in southwestern Louisiana and forms a part of the Acadiana region. In 2005, the parish was damaged significantly by Hurricane Rita, which caused much wind damage and flooding in the western part of the parish. The storm also caused Lacassine National Wildlife Refuge to be affected by saltwater intrusion.

Orange is a city and the county seat of Orange County, Texas, United States. As of the 2010 census, the city population was 18,595. It is the easternmost city in Texas, located on the Sabine River at the border with Louisiana, and is 113 miles (182 km) from Houston. Orange is part of the Beaumont−Port Arthur Metropolitan Statistical Area. Founded in 1836, it is a deep-water port to the Gulf of Mexico. 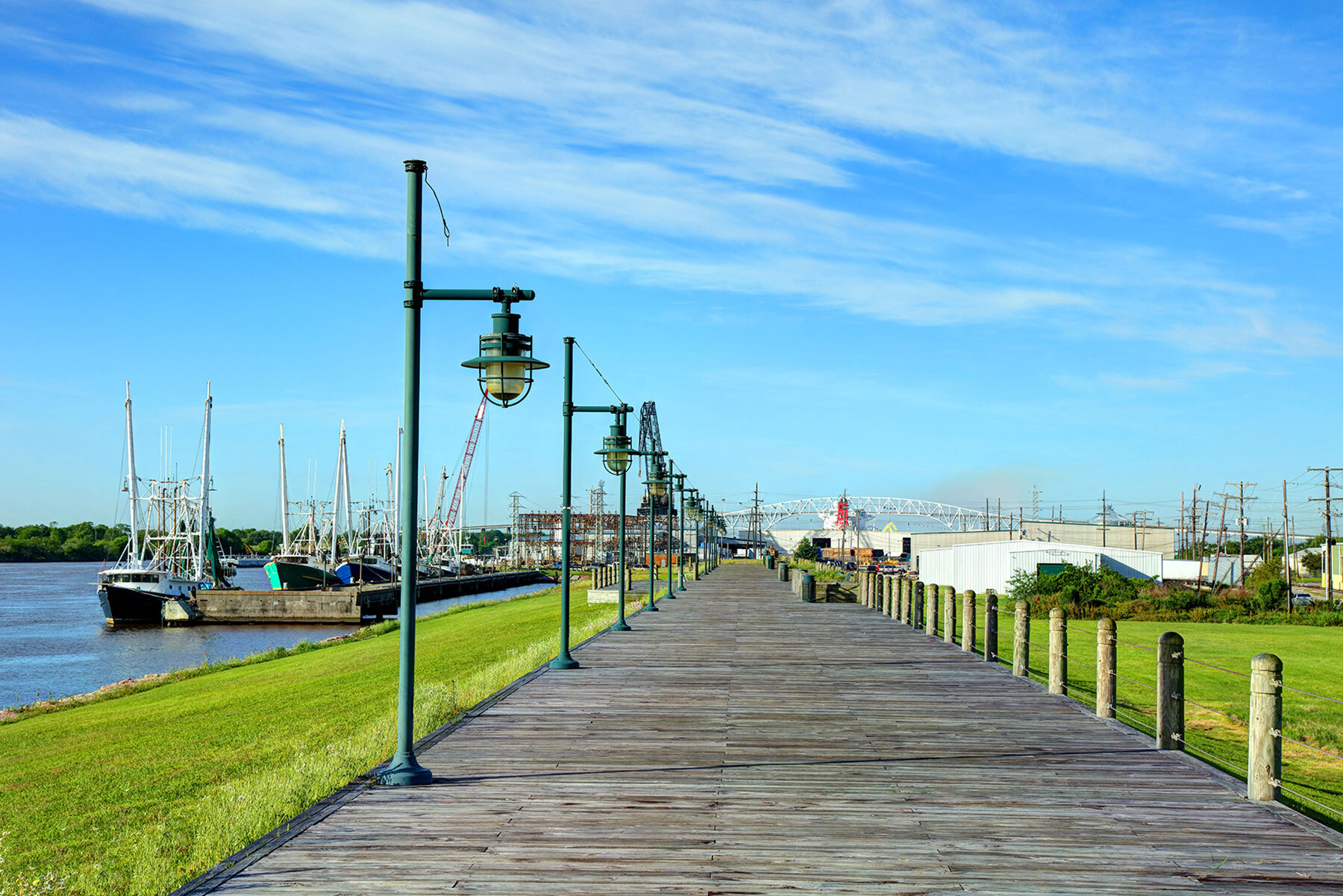 Port Arthur is a city in Jefferson County within the Beaumont–Port Arthur metropolitan area of the U.S. state of Texas. A small, uninhabited portion extends into Orange County. It is 90 mi (140 km) east of Houston. The largest oil refinery in the United States, the Motiva Refinery, is located in Port Arthur.The population of Port Arthur was 53,818 at the 2010 census, down from 57,755 at the 2000 census. Early attempts at settlements in the area had all failed. However, in 1895, Arthur Stilwell founded Port Arthur, and the town quickly grew. Port Arthur was incorporated as a city in 1898 and soon developed into a seaport. It eventually became the center of a large oil refinery network. The Rainbow Bridge across the Neches River connects Port Arthur to Bridge City. Port Arthur is vulnerable to hurricanes and extensive damage to the city has been caused several times.

Nederland ( NEE-dər-lənd) is a city in Jefferson County, Texas, United States. The population was 17,547 at the 2010 census.The city was settled in 1897 along what is now Boston Avenue and incorporated in 1940. It was settled by Dutch immigrants on land sold by the Kansas City Southern railroad. It is part of the Beaumont–Port Arthur metropolitan area. Nederland is also a part of an area known as "the Golden Triangle", which comprises Beaumont, Port Arthur, and Orange. The city is adjacent to the Jack Brooks Regional Airport.