Wikipedia
Gering is a city in, and the county seat of, Scotts Bluff County, in the Panhandle region of Nebraska, United States. The population was 8,500 at the 2010 census. 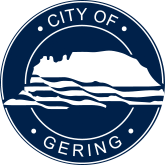 Find more things to do, itinerary ideas, updated news and events, and plan your perfect trip to Gering
ADVERTISEMENT

Goshen County is a county in the U.S. state of Wyoming. As of the 2010 United States Census, the population was 13,249. Its county seat is Torrington. The eastern boundary of the County borders the Nebraska state line. Goshen County produces more cattle than any other Wyoming county. In 1997, the County had 688 farms and ranches averaging 1,840 acres. By 2007, there were 665 farms and ranches in the county.

Visit Cheyenne Wyoming, located approximately one and a half hours north of Denver, is Wyoming’s capital city and an icon in the American west.