Wikipedia
Cold Spring is a village in the town of Philipstown in Putnam County, New York, United States. The population was 2,013 at the 2010 census. It borders the smaller village of Nelsonville and the hamlet of Garrison. The central area of the village is on the National Register of Historic Places as the Cold Spring Historic District due to its many well-preserved 19th-century buildings, constructed to accommodate workers at the nearby West Point Foundry (itself a Registered Historic Place today). The town is the birthplace of General Gouverneur K. Warren, who was an important figure in the Union Army during the Civil War. The village, located in the Hudson Highlands, sits at the deepest point of the Hudson River, directly across from West Point. Cold Spring serves as a weekend getaway for many residents of New York City. Commuter service to New York City is available via the Cold Spring train station, served by Metro-North Railroad. The train journey is about an hour and ten minutes to Grand Central Terminal.
Find more things to do, itinerary ideas, updated news and events, and plan your perfect trip to Cold Spring
ADVERTISEMENT
Omaze

Carmel (pronounced ) is a municipality in Putnam County, New York, United States. As of the 2010 census, the town had a population of 34,305.The Town of Carmel is on the southern border of Putnam County, abutting Westchester County. There are no incorporated villages in the town, although the hamlets of Carmel and Mahopac each have populations sizable enough to be thought of as villages.

Orange County is a county located in the U.S. state of New York. As of the 2020 census, the population was 401,310. The county seat is Goshen. This county was first created in 1683 and reorganized with its present boundaries in 1798.Orange County is part of the Poughkeepsie–Newburgh–Middletown metropolitan statistical area, which belongs to the larger New York–Newark–Bridgeport, NY–NJ–CT–PA Combined Statistical Area. It is in the state's Mid-Hudson Region of the Hudson Valley Area. The County Executive is Steve Neuhaus. As of the 2010 census the center of population of New York state was located in Orange County, approximately three miles west of the hamlet of Westbrookville.

Rockland County is the southernmost county on the west side of the Hudson River in the U.S. state of New York, part of the New York City metropolitan statistical area. It is a suburb of New York City that is about 6 miles (10 kilometers) from the Bronx at their closest points. The county's population, as of the 2020 United States Census, is 338,329, making it the third-most densely populated county outside New York City within New York (after Nassau and neighboring Westchester Counties, respectively). The county seat is New City. Rockland County is accessible via the New York State Thruway, which crosses the Hudson to Westchester at the Tappan Zee Bridge ten exits up from the Bronx, as well as the Palisades Parkway five exits up from the George Washington Bridge. The county's name derives from "rocky land", as the area has been aptly described, largely due to the Hudson River Palisades. Rockland County is the smallest county by area in New York outside New York City. It comprises five towns and nineteen incorporated villages, with numerous unincorporated villages (sixteen) and hamlets. Rockland County is designated as a Preserve America Community, and nearly a third of the county's area is parkland. The county has the largest Jewish population percentage of any U.S. county, at 31.4%, or 90,000 residents. Rockland also ranked 31st on the list of highest-income counties by median household income in the United States, with a median household income of $82,534 according to the 2010 census. 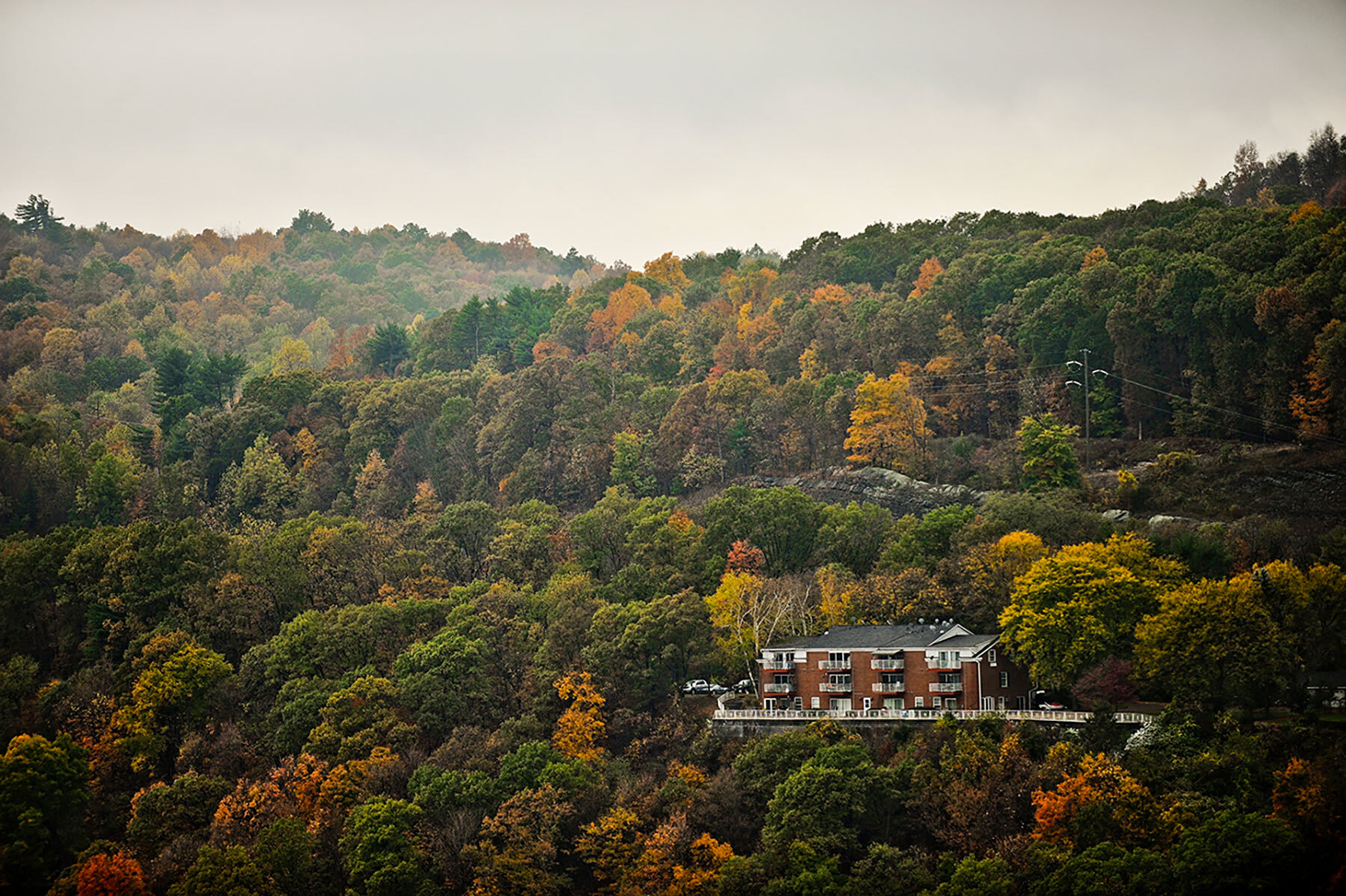 Poughkeepsie ( pə-KIP-see, officially the City of Poughkeepsie, separate from the Town of Poughkeepsie) is a city in the U.S. state of New York. It is the county seat of Dutchess County, with a 2019 census-estimated population of 30,515. Poughkeepsie is in the Hudson River Valley region, midway between the core of the New York metropolitan area and the state capital of Albany. It is a principal city of the Poughkeepsie–Newburgh–Middletown metropolitan area which belongs to the New York metropolitan area. It is served by the nearby Hudson Valley Regional Airport and Stewart International Airport in Orange County, New York. Poughkeepsie has been called "The Queen City of the Hudson". It was settled in the 17th century by the Dutch and became New York State's second capital shortly after the American Revolution. It was chartered as a city in 1854. Major bridges in the city include the Walkway over the Hudson, a former railroad bridge called the Poughkeepsie Bridge which reopened as a public walkway on October 3, 2009; and the Mid-Hudson Bridge, a major thoroughfare built in 1930 that carries U.S. Route 44 over the Hudson. The city of Poughkeepsie lies in New York's 18th congressional district.The City of Poughkeepsie and neighboring Town of Poughkeepsie are generally viewed as a single place and are commonly referred to collectively as "Poughkeepsie", with a combined population of 74,751 in 2018.Poughkeepsie is situated between the Lower Hudson and the Capital District regions, and the city's economy is stimulated by several major corporations, including IBM. Educational institutions include Marist College, Vassar College, Dutchess Community College and The Culinary Institute of America.