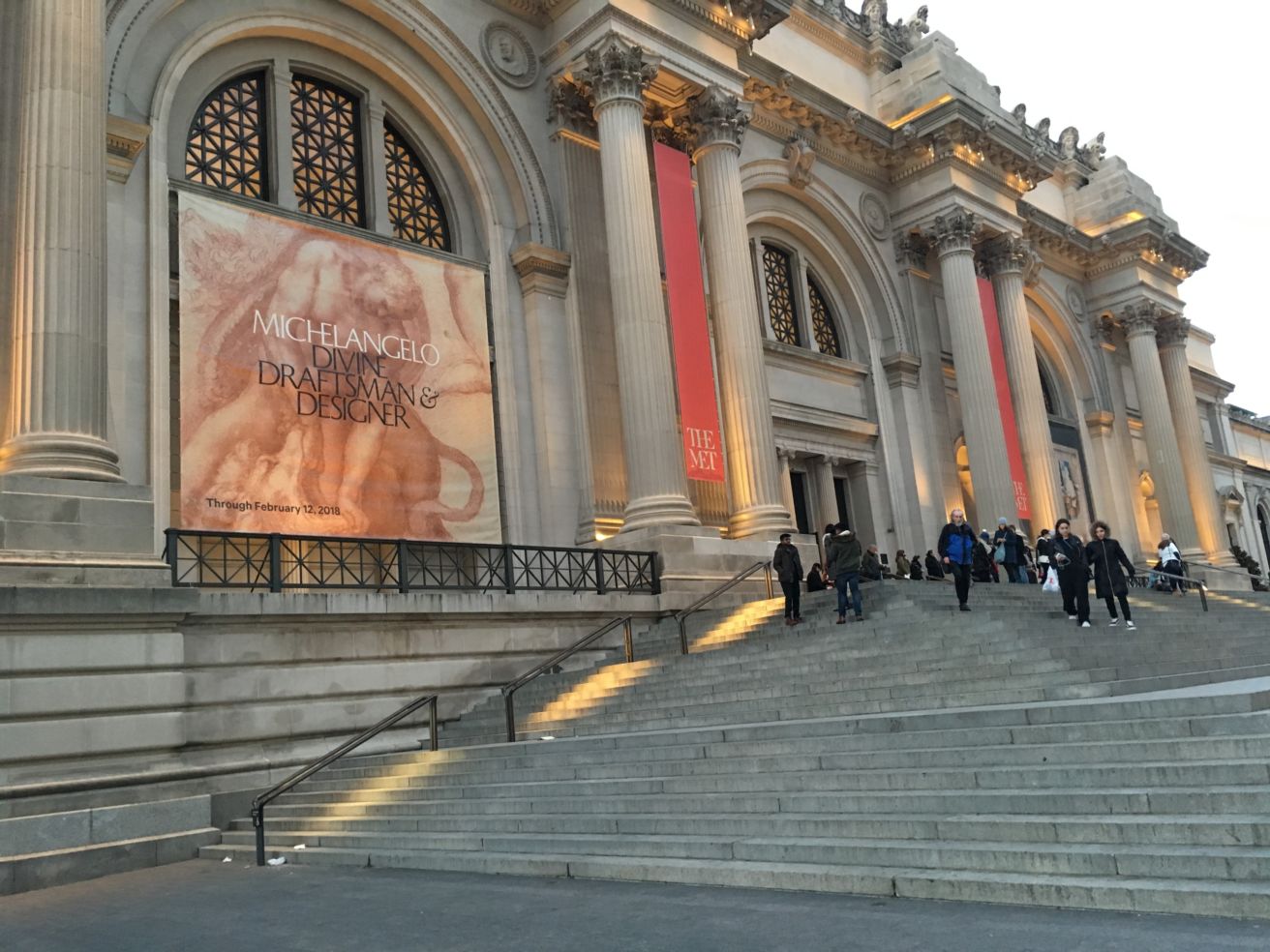 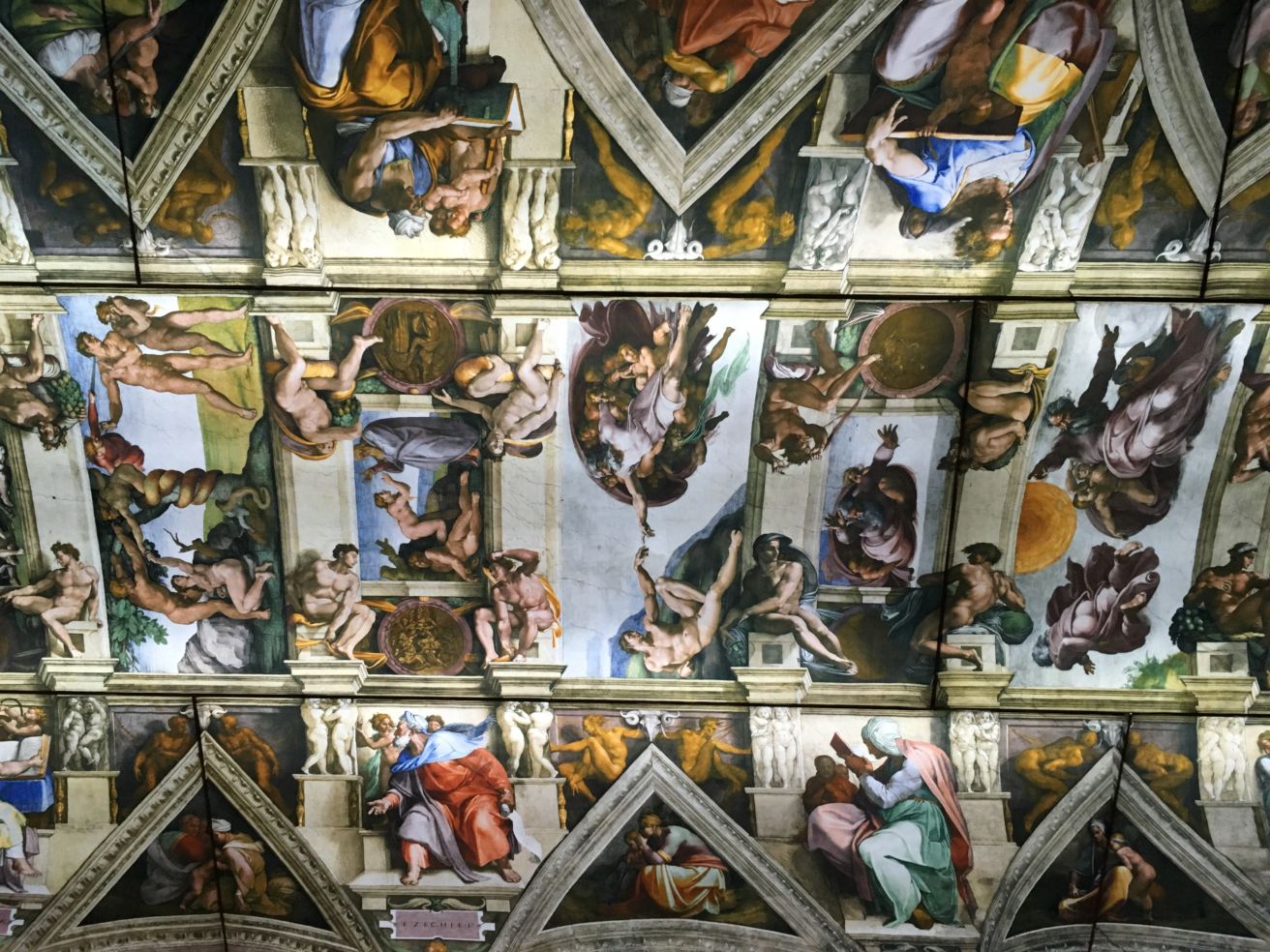 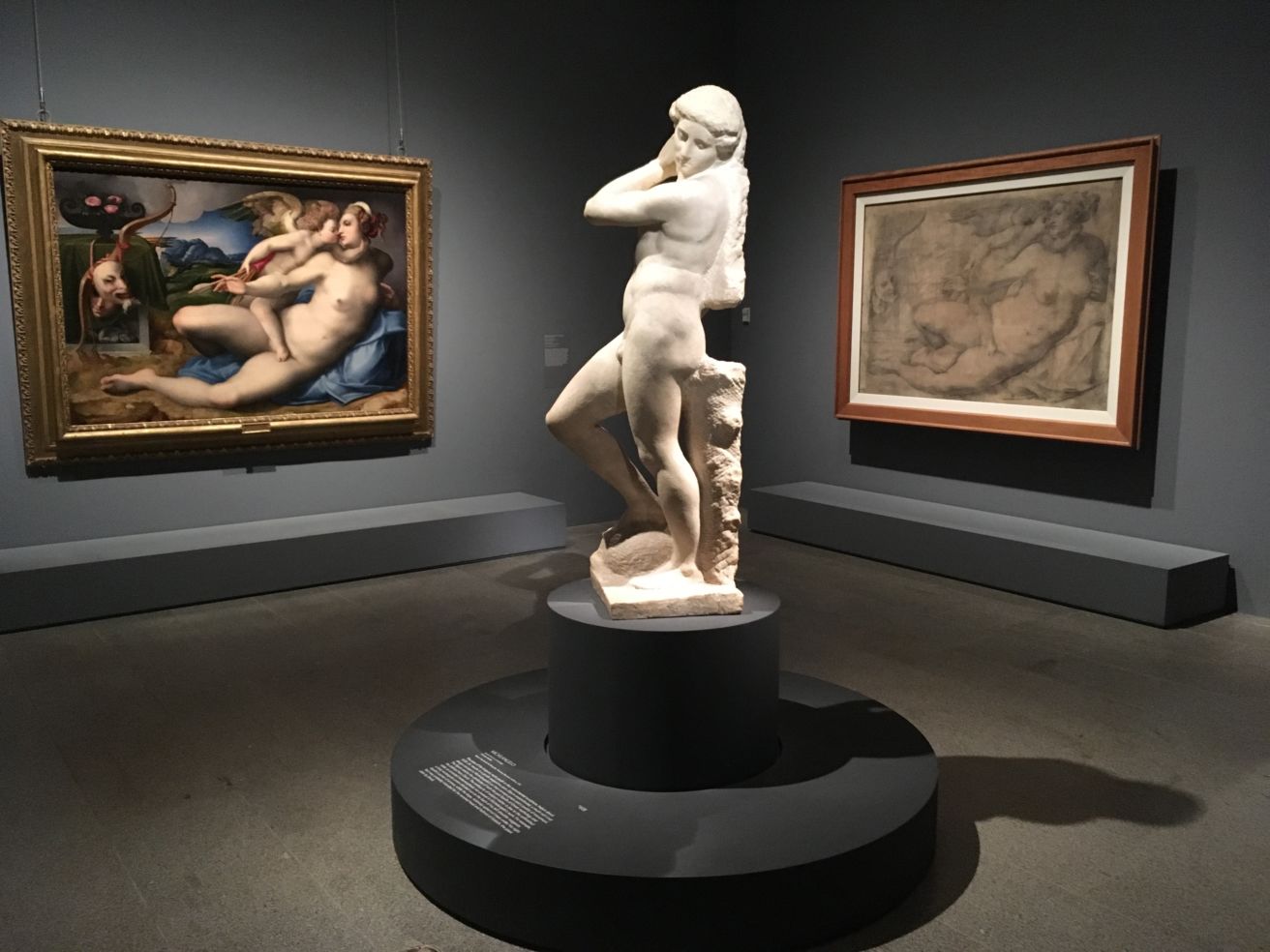 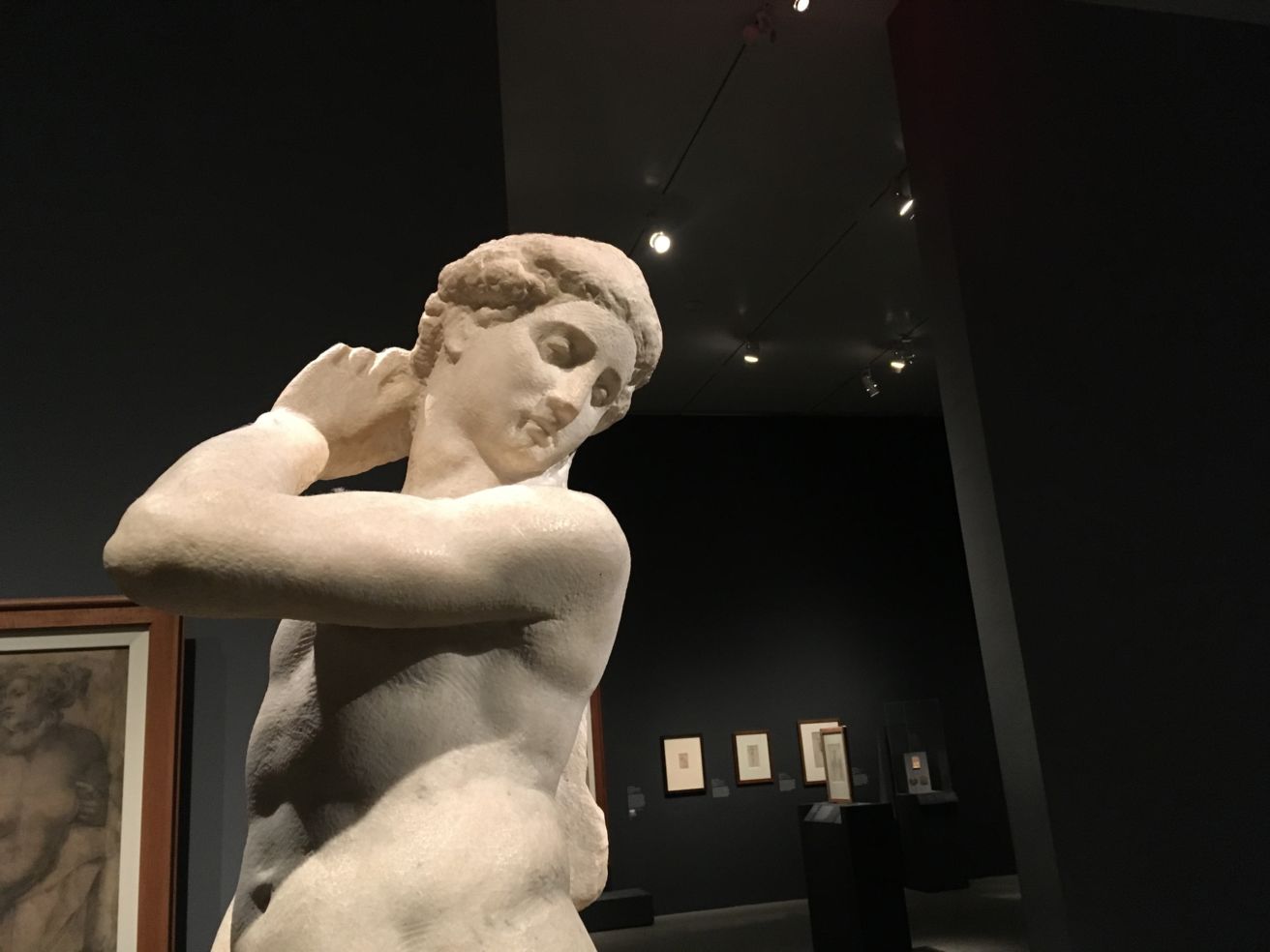 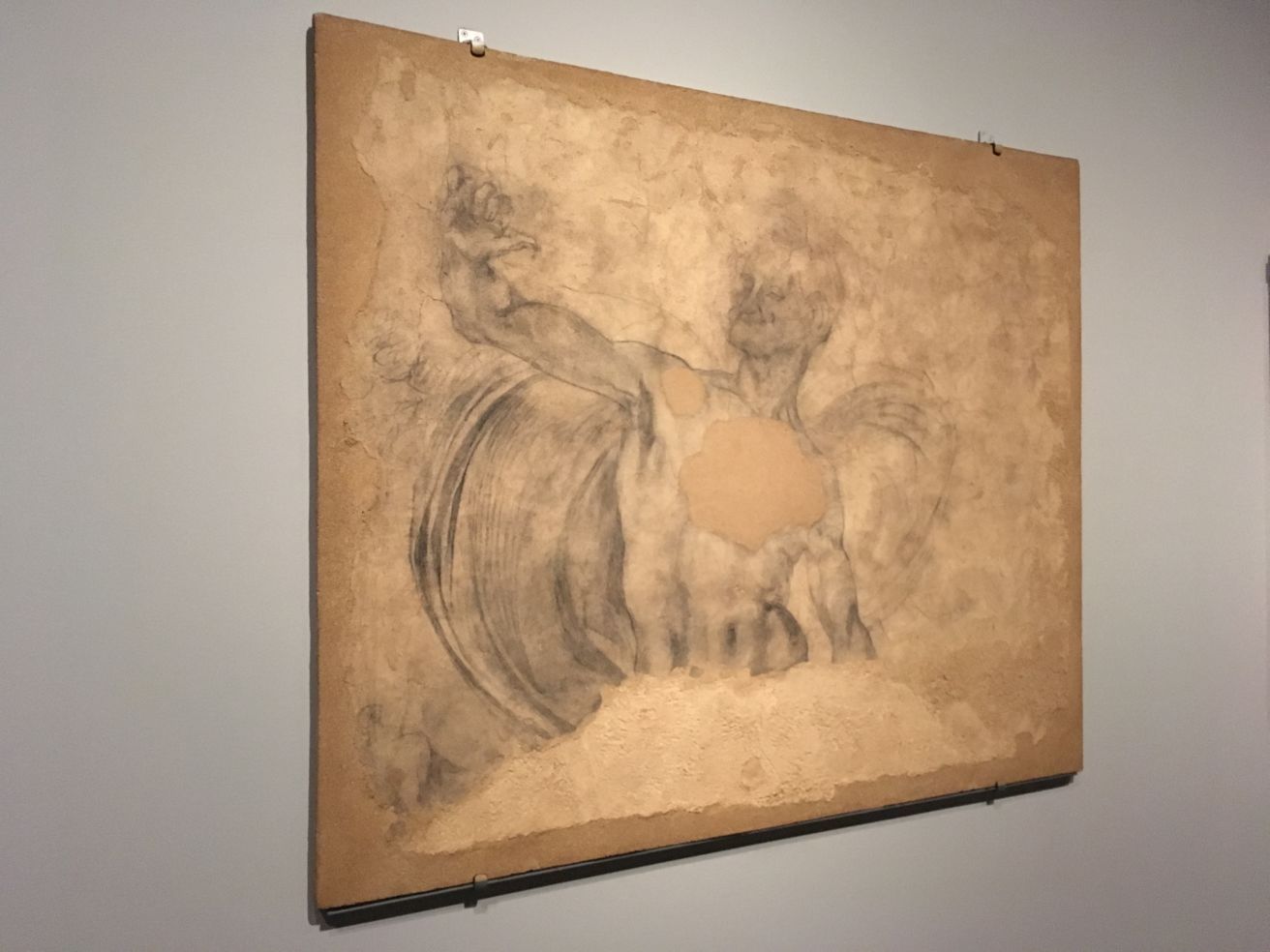 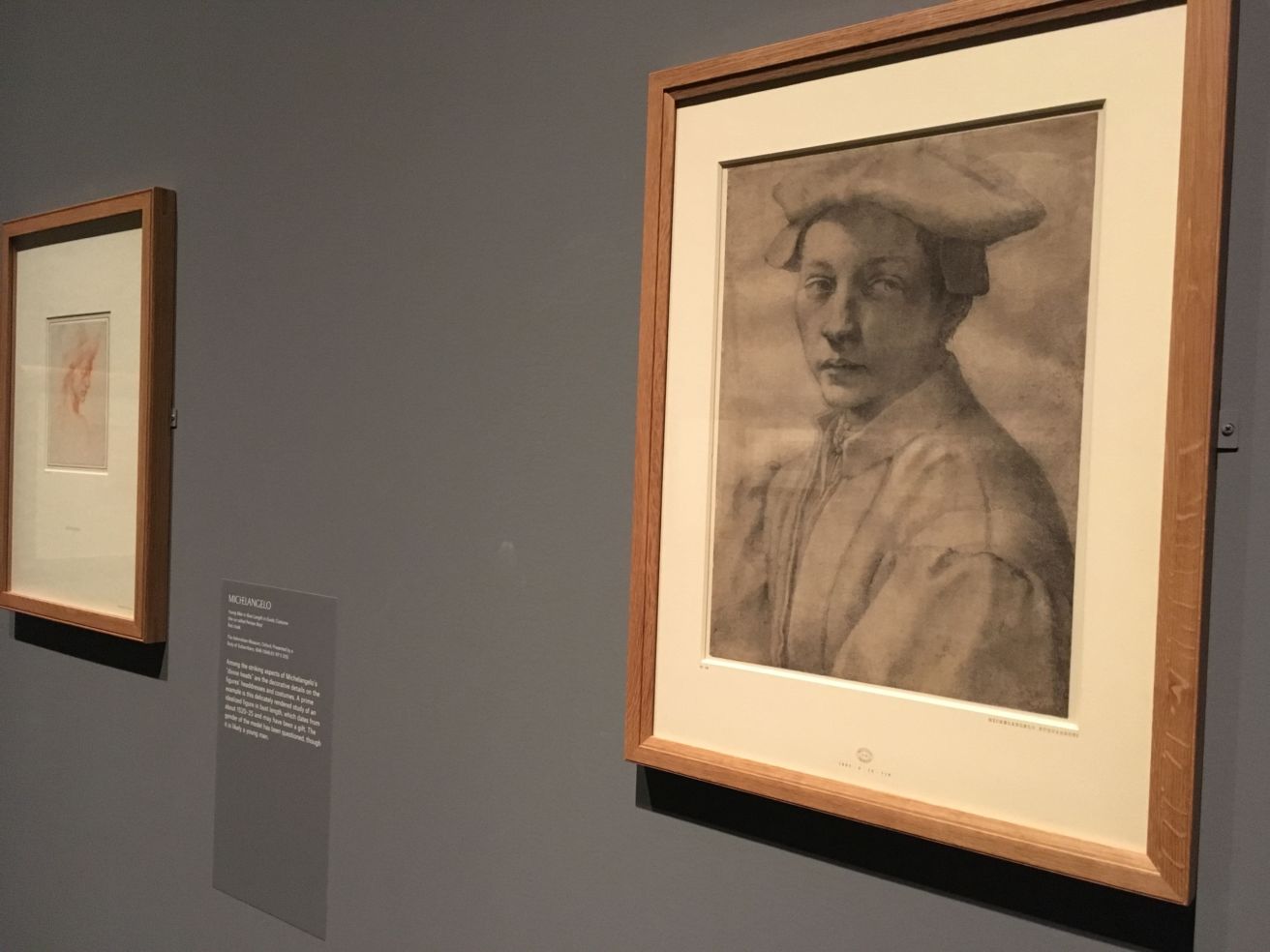 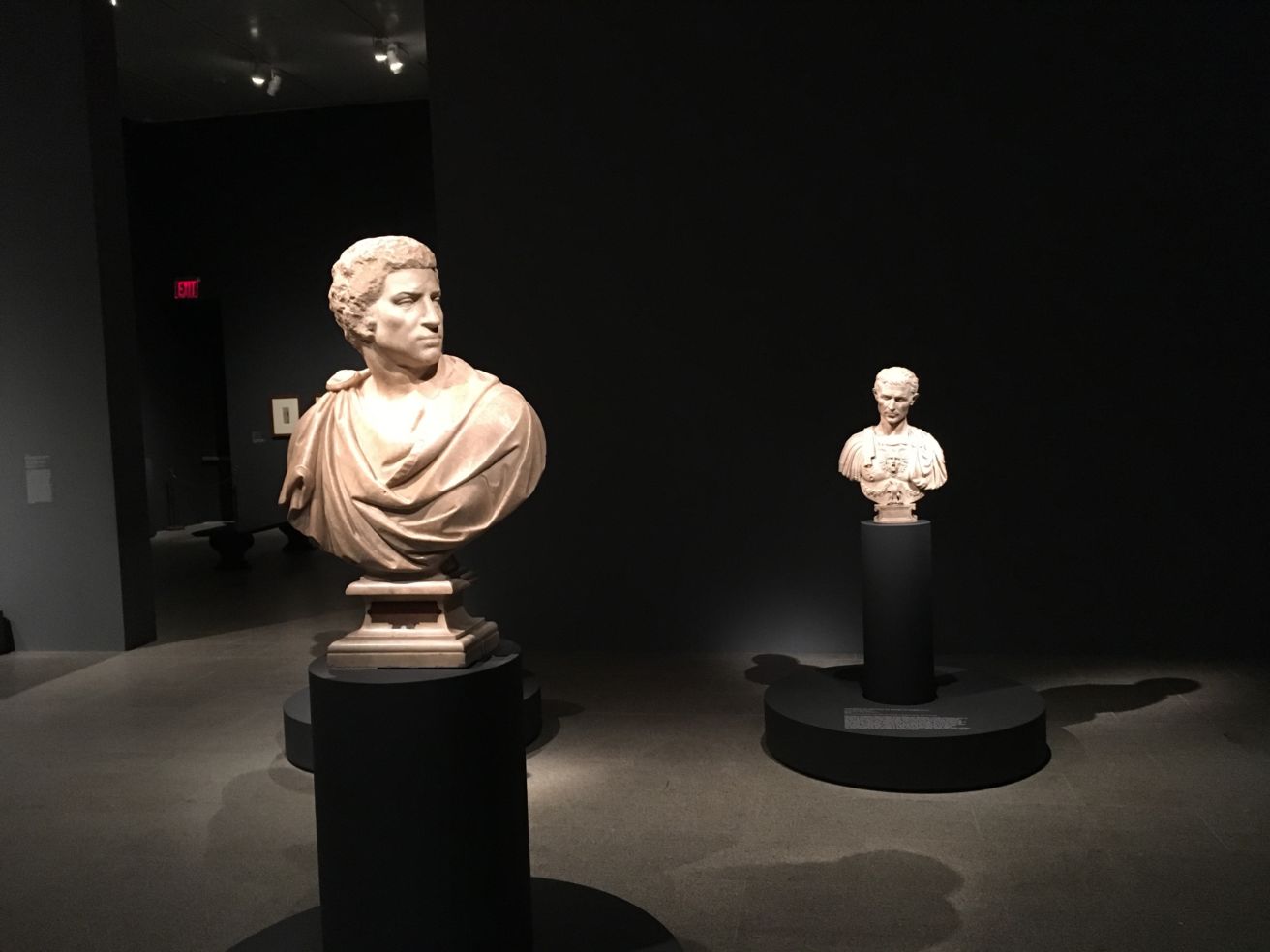 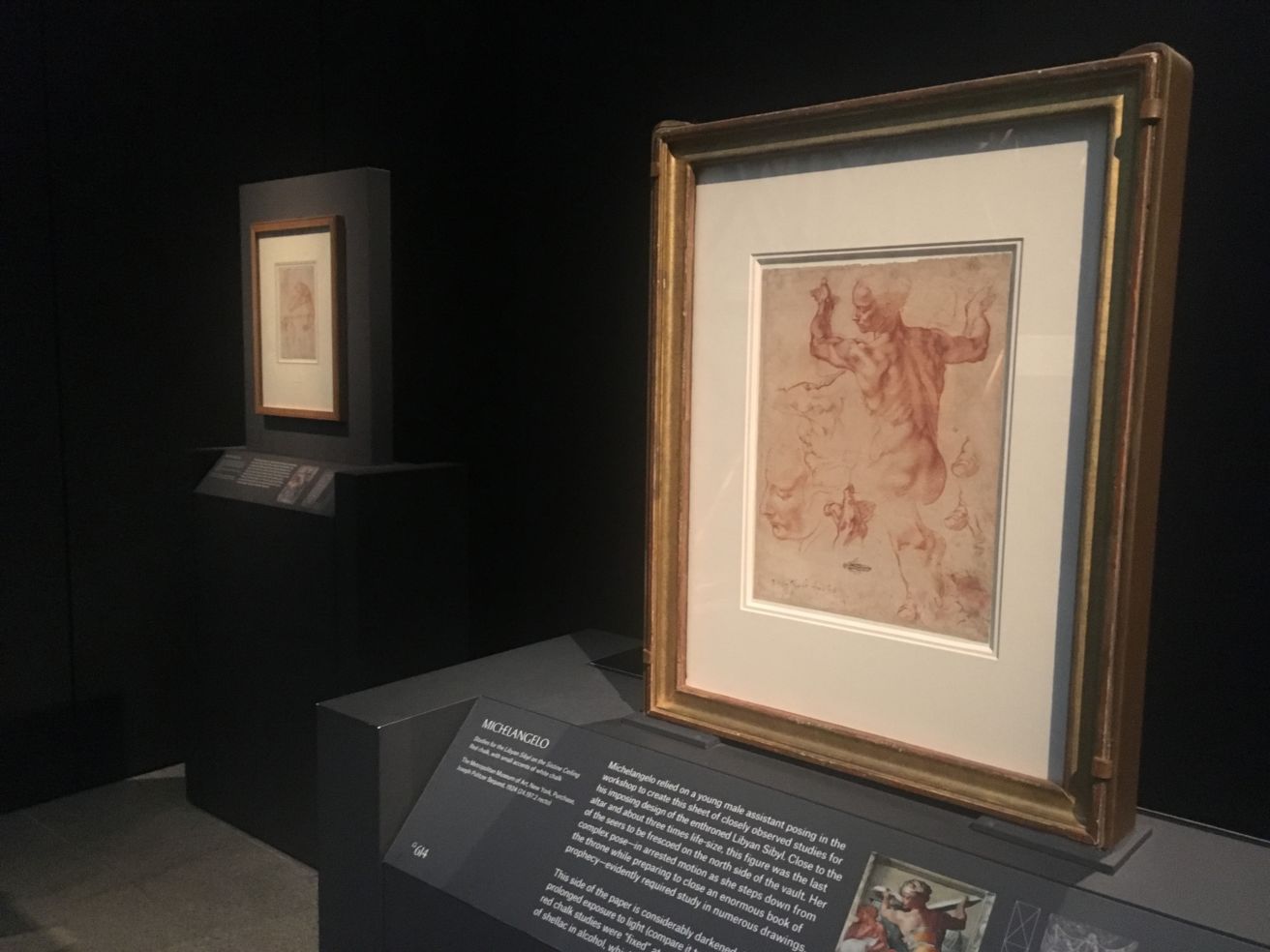 Michelangelo: Divine Draftsman & Designer is on view through February 12 at the Metropolitan Museum of Art in New York City.

A detail from the replica of Michelangelo's Sistine Chapel ceiling.

Portrait of Andrea Quaratesi. Black chalk, with losses on the design surface delicately integrated with brush and gray wash. The British Museum, London.

Studies for the Libyan Sibyl. Red chalk, with small accents of white chalk on the left shoulder of the figure in the main study. The Metropolitan Museum of Art, New York,

This once-in-a-lifetime, exquisitely curated exhibition of the Renaissance artist's drawings and sculptures closes on February 12.

“Five hundred years seem to melt away in looking at his art.”

That’s how Dr. Carmen C. Bambach, Curator in the Metropolitan Museum of Art’s Department of Drawings and Prints, describes being in the presence of more than 130 of Michelangelo’s drawings, three of his marble sculptures, and other pieces by the Renaissance artist and some of his contemporaries currently on display at the Met’s Fifth Avenue museum in New York City (metmuseum.org).

Dr. Bambach’s words are the closest I can come to conveying the experience of entering Michelangelo: Divine Draftsman & Designer, the one-of-a-kind exhibition, on view through February 12, drawn from more than 50 public and private art collections from the U.S. and Europe. As we make our way through the galleries, we are not encountering “old stuff.” We are encountering living people with the same facial expressions, rippling muscles, gestures, and, we imagine, voices as the people we meet every day. Ultimately, of course, in the presence of timeless art, we are encountering ourselves.

New York City’s holiday hordes have gone home, and a little more than two weeks remain for visitors to immerse themselves in Michelangelo without having to travel to Florence or Rome. Here, just a few of the highlights I hope you can see. (Check out our slideshow, above, shot with the Met’s permission in an unforgettable visit to the galleries.)

A REPLICA OF THE SISTINE CHAPEL CEILING

Look up at the replica of the ceiling of the Sistine Chapel in the gallery devoted to Michelangelo’s plans and sketches for that famously difficult endeavour (he complained bitterly and rather poetically about having to paint lying on his back on a high scaffold). The replica is clearer and seemingly closer to viewers than the actual ceiling at the Vatican, and I felt I was seeing and appreciating this masterpiece in an entirely new light. Take a look at the sketches for the ceiling, which offer, as art critics have noted, a more casual and sometimes playful attitude than the finished paintings themselves. You may also marvel at how vigorously the artist was allowed to celebrate nudity across the ceiling of a Renaissance chapel.

The heart of this exhibition is the more than 130 drawings on display, ranging from gestural sketches of faces and limbs to fully realized drawings that Michelangelo gave to friends as gifts. You’ll see Michelangelo’s early sketches for some of his iconic sculptural and architectural works, including the Medici Chapel in Florence and St. Peter’s Basilica at Vatican City in Rome. More intimate portraits will demand your attention, too, most especially the Portrait of Andrea Quaratesi, a loan from the British Museum, which truly seems to glance out at viewers, melting those centuries away.

In reading the exhibition’s excellent plaques and captions, you’ll note that Michelangelo could be high-maintenance, perhaps an occupational hazard for an artist who was literally nicknamed il divino (the “divine one”) in his lifetime. While painting the Sistine Chapel ceiling, he insisted he was “not a painter.” He personally oversaw the quarrying and transportation of the marble he used for his sculptures, even going so far as to help redesign the roads on which the marble was transported. But while Michelangelo always felt he was first and foremost a sculptor (and he'll get no argument from the likes of me), most of his marble sculptures remained unfinished at his death at age 88. Three marble sculptures - a Young Archer, an unfinished Bust of Brutus, and a seriously unfinished work (you can see raw, uncarved marble in some spots) that experts have labeled Apollo-David because they are not sure what the artist’s intentions were - are perfectly placed and lighted in a way that insists that you stop whatever else you may be doing and just stand in their presence. To encounter this many original Michelangelo sculptures anywhere else, you’ll have to travel to Florence (home to David) or Rome (home to the Pieta).

The Met has published a gorgeous catalogue of Michelangelo: Divine Draftsman & Designerthat is the closest any of us will ever get to revisiting this exquisitely curated exhibition after the lights dim and the doors close on Monday February 12.