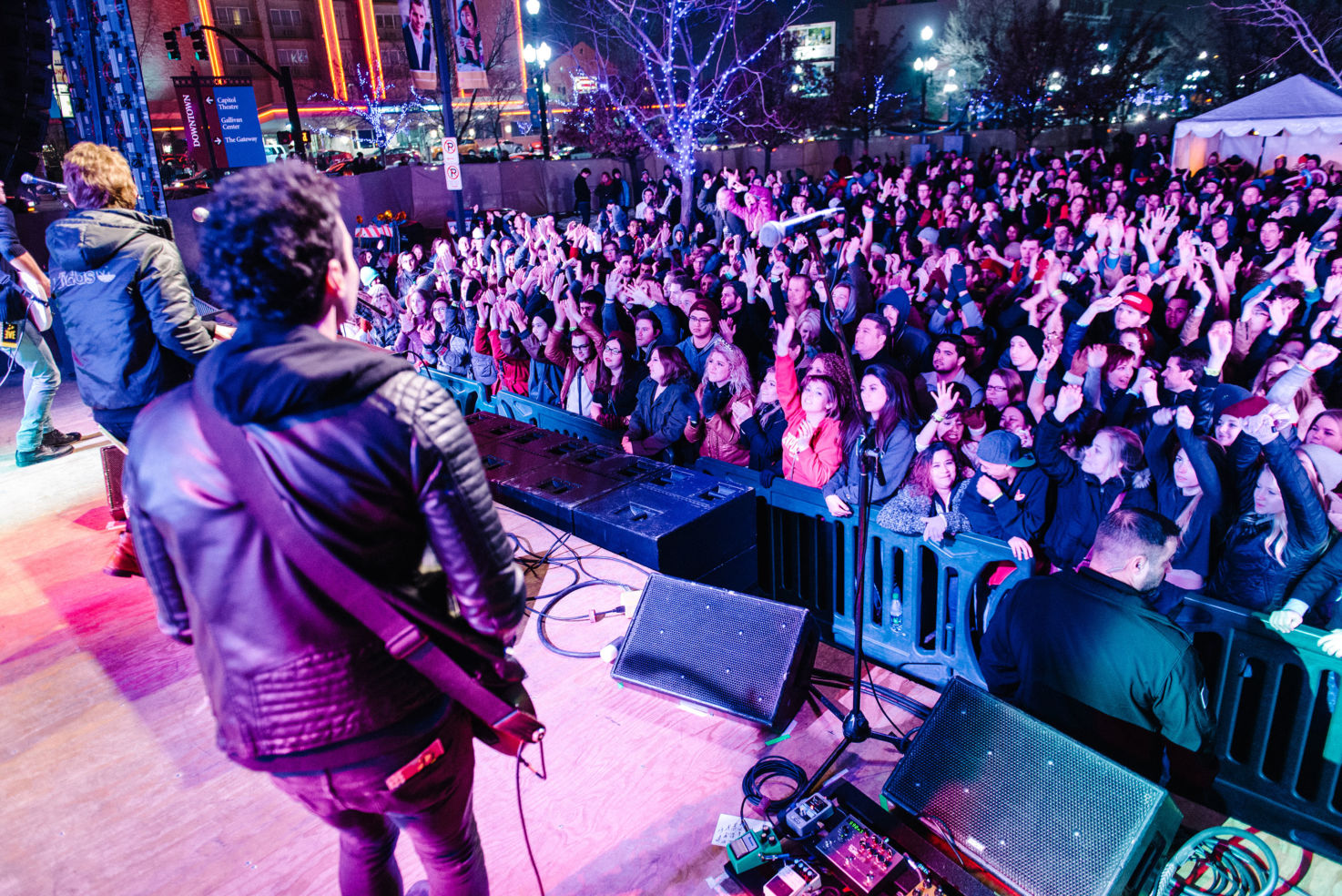 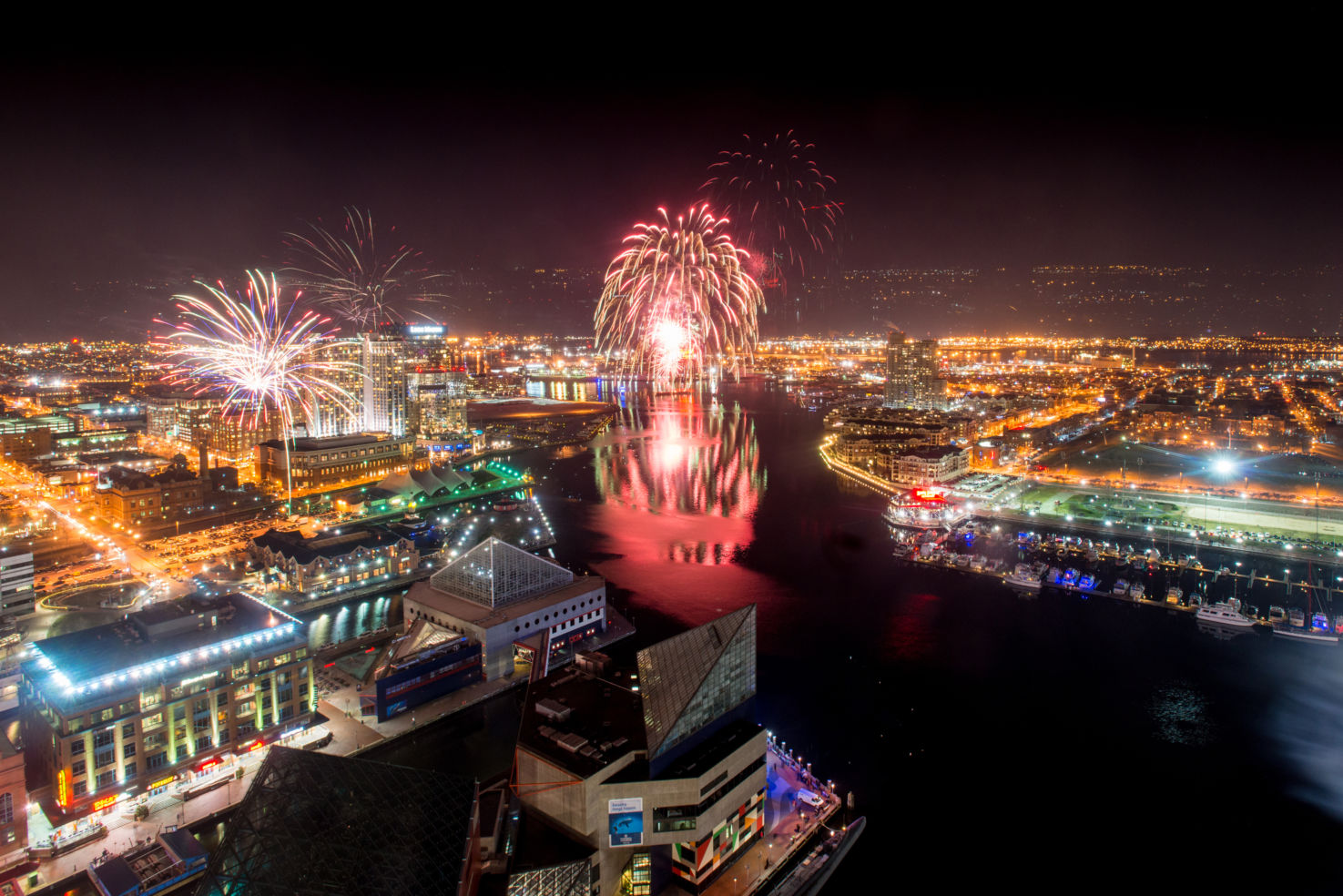 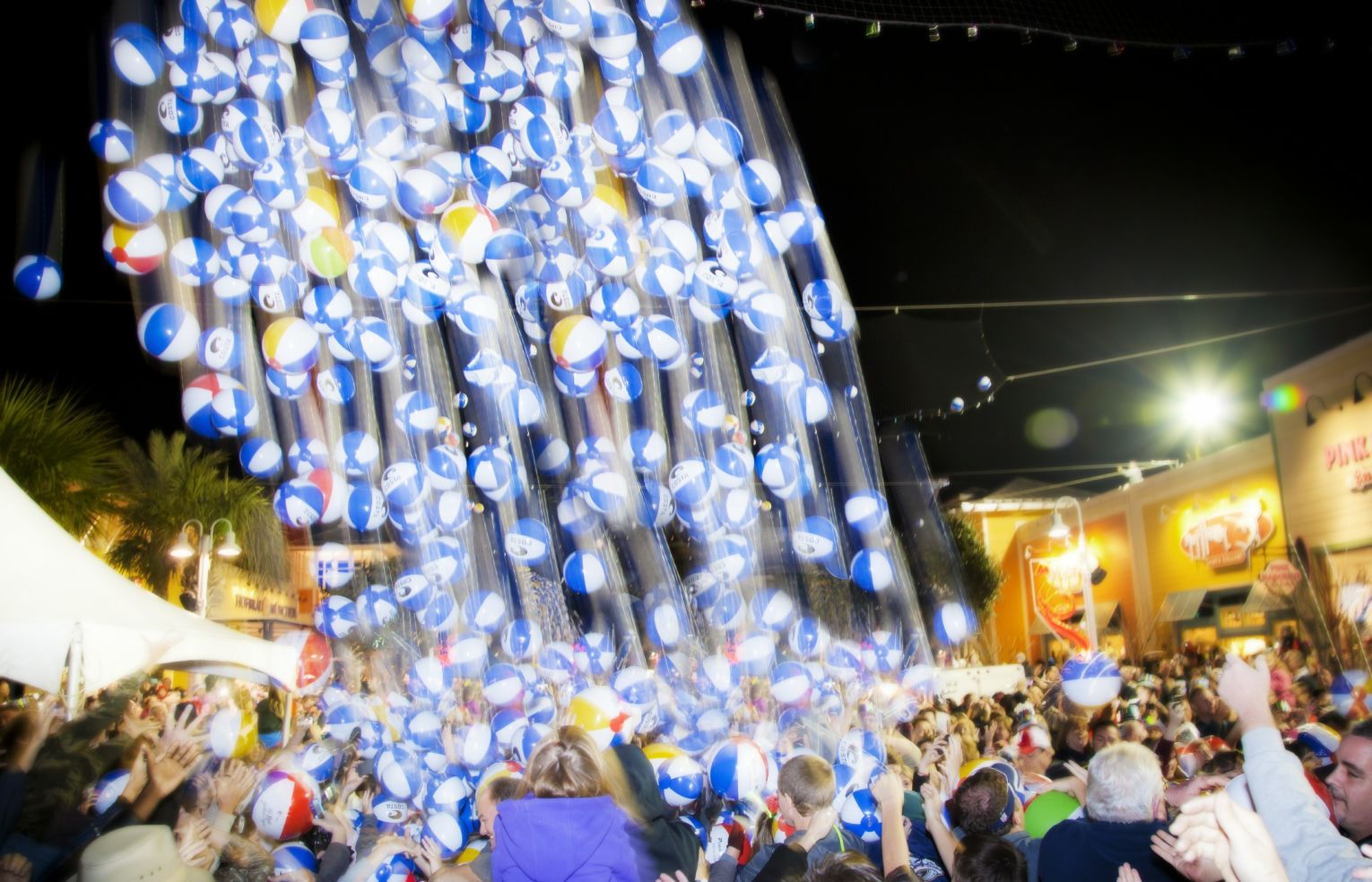 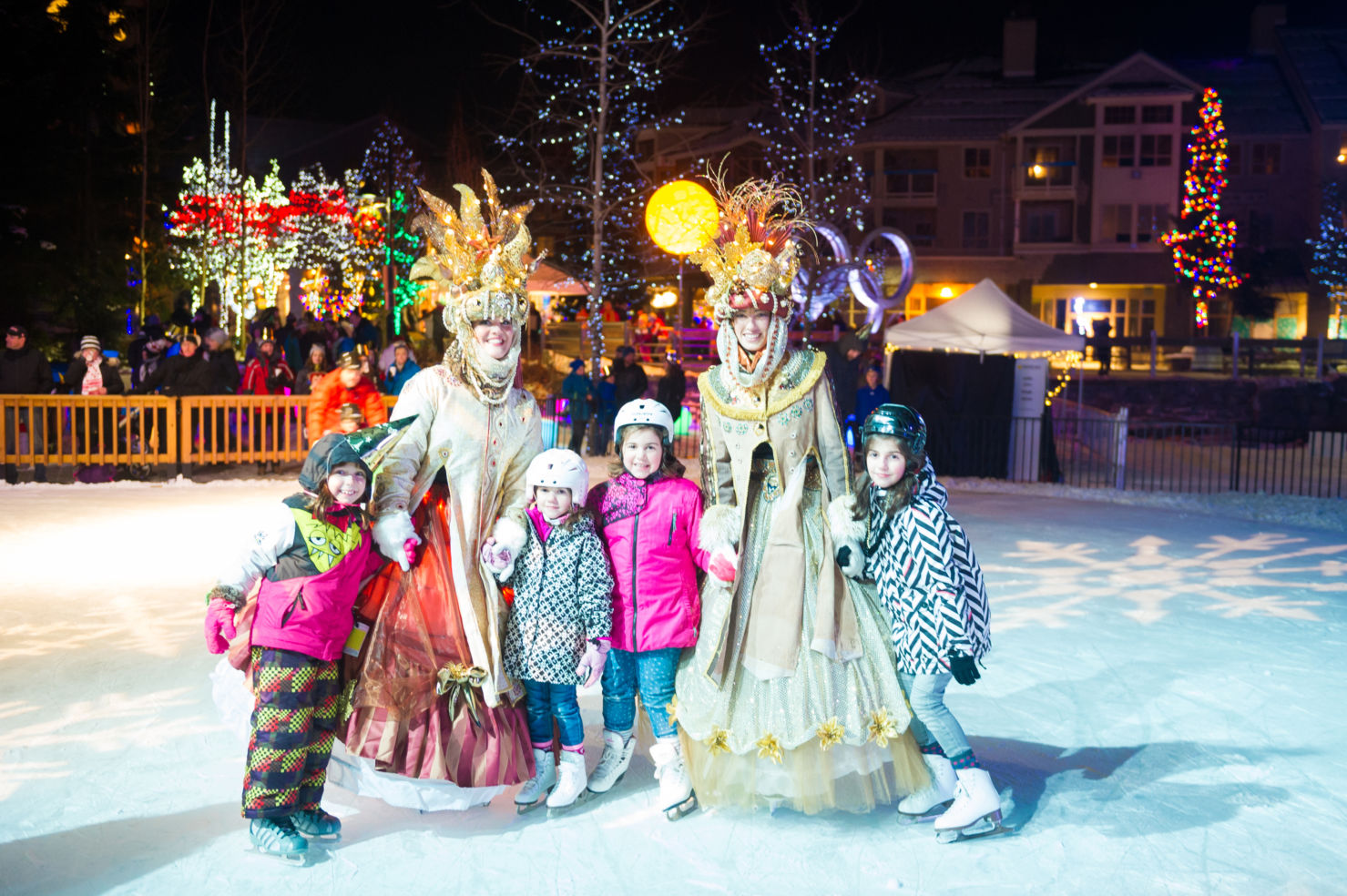 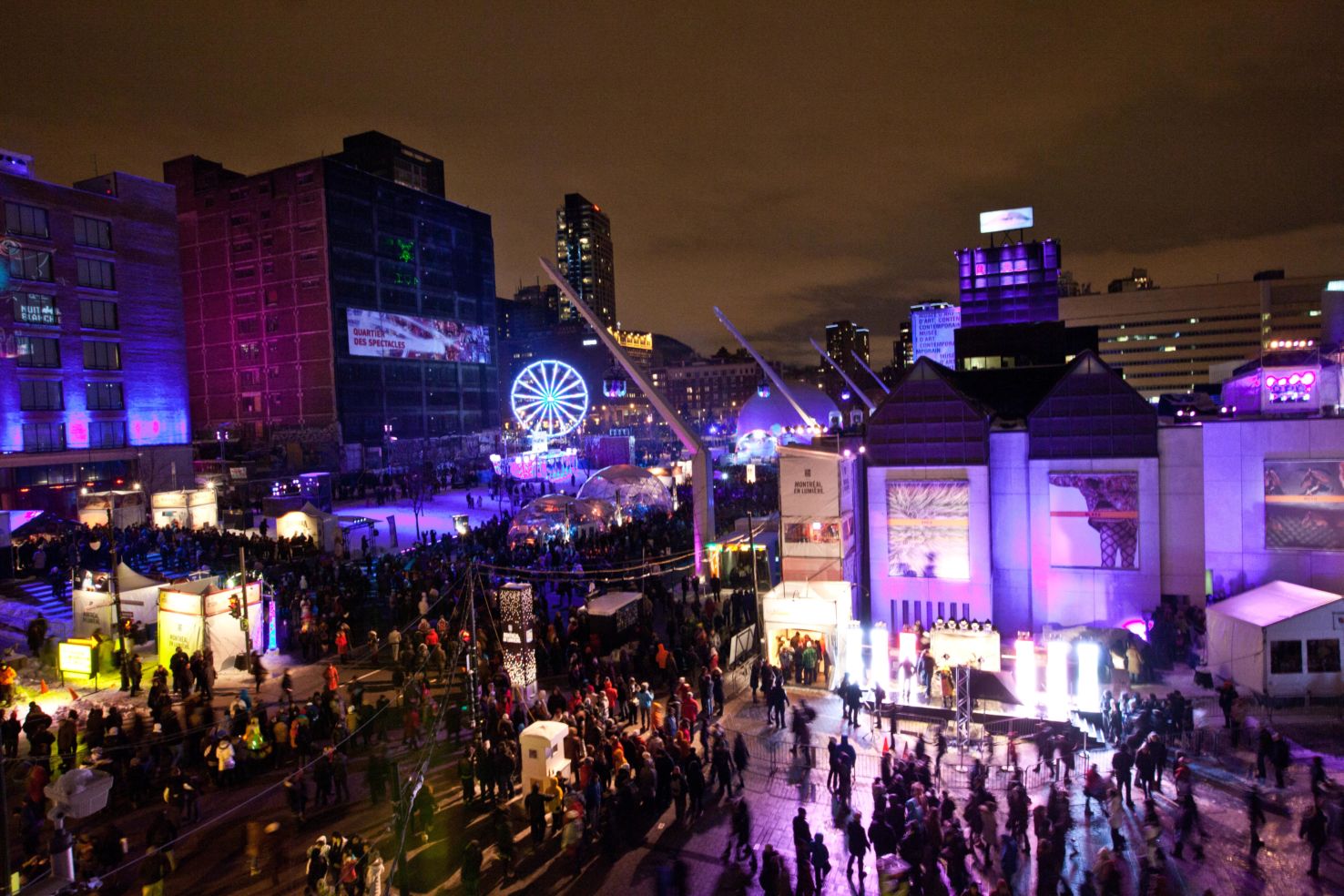 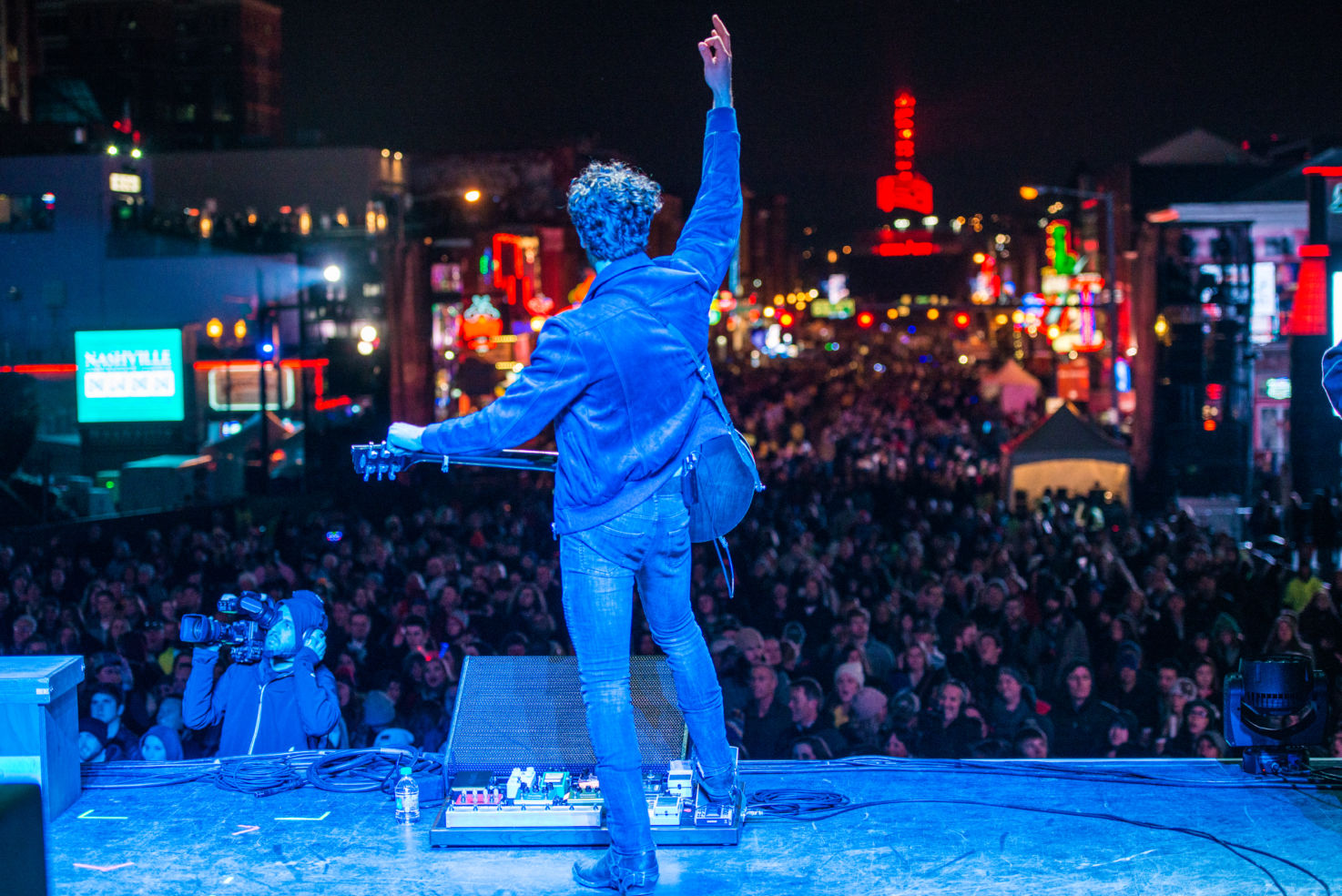 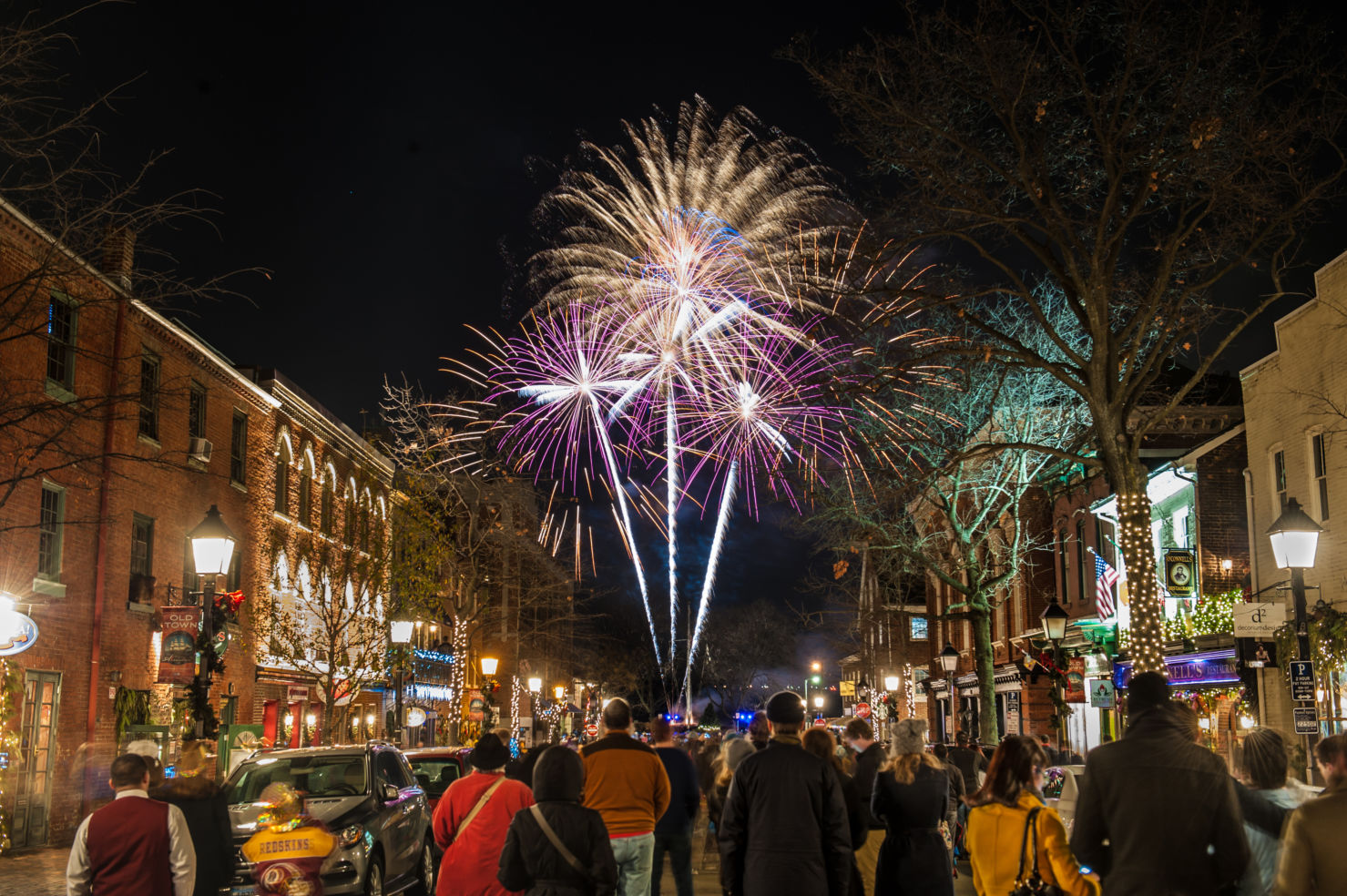 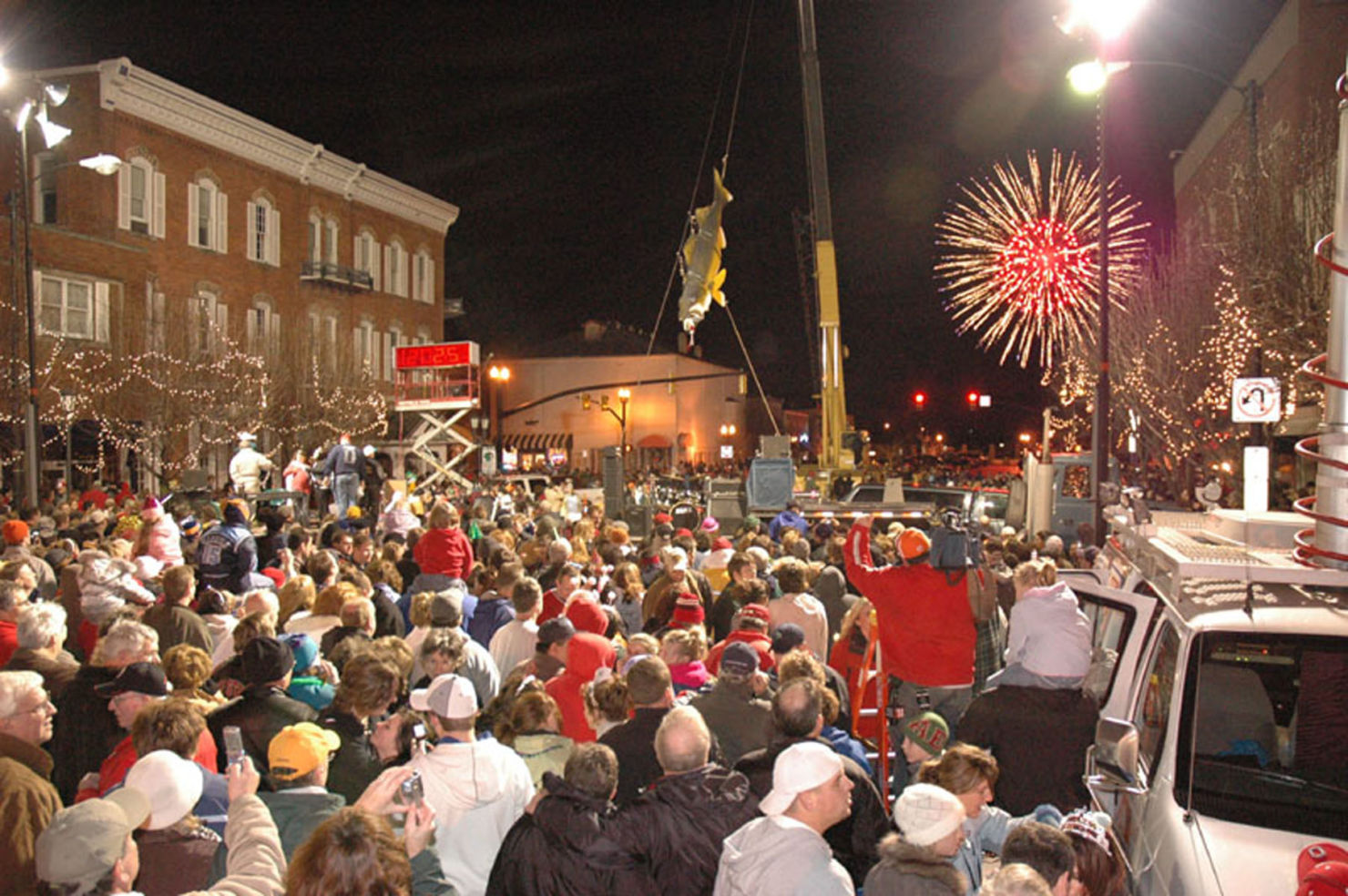 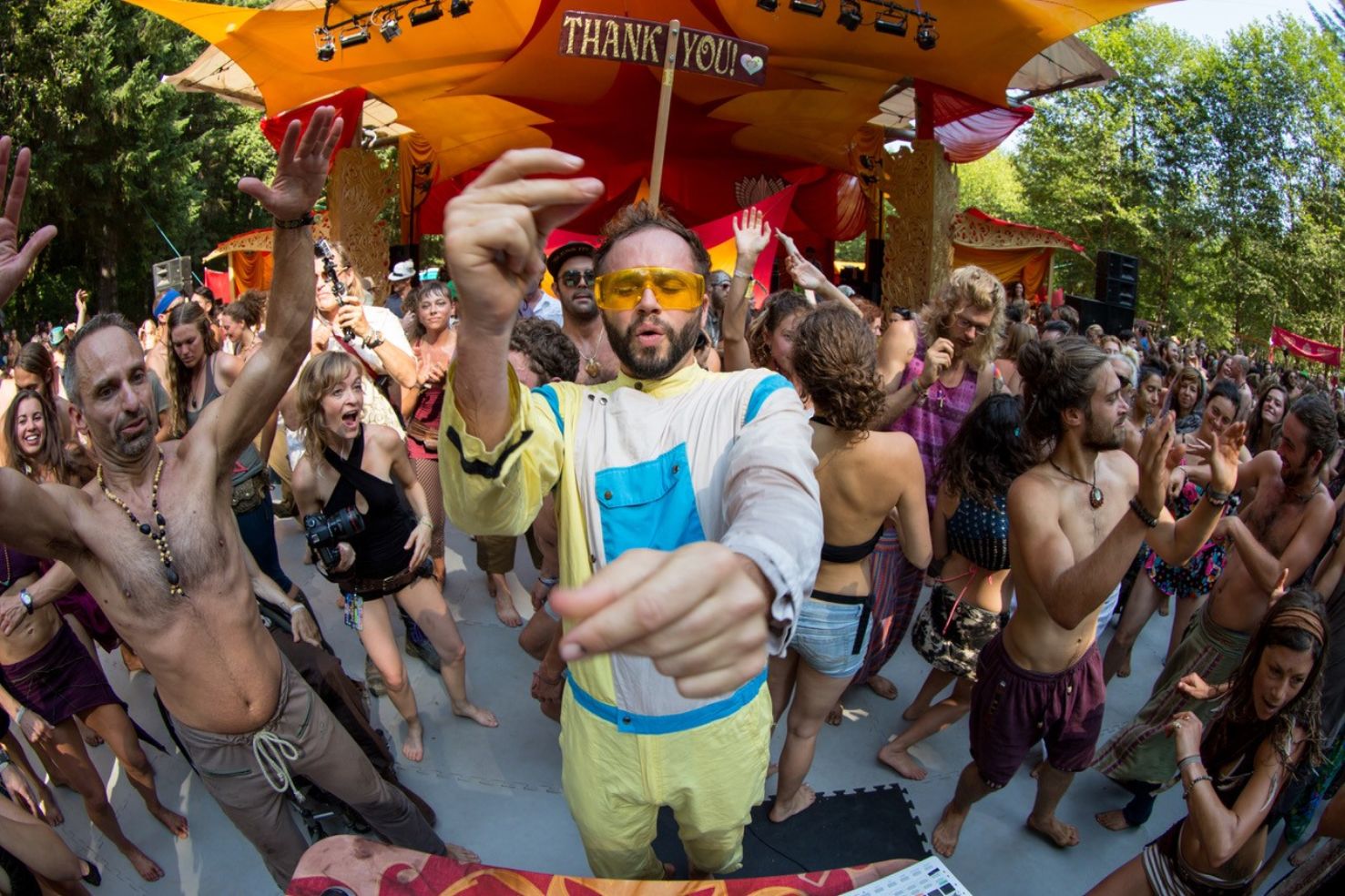 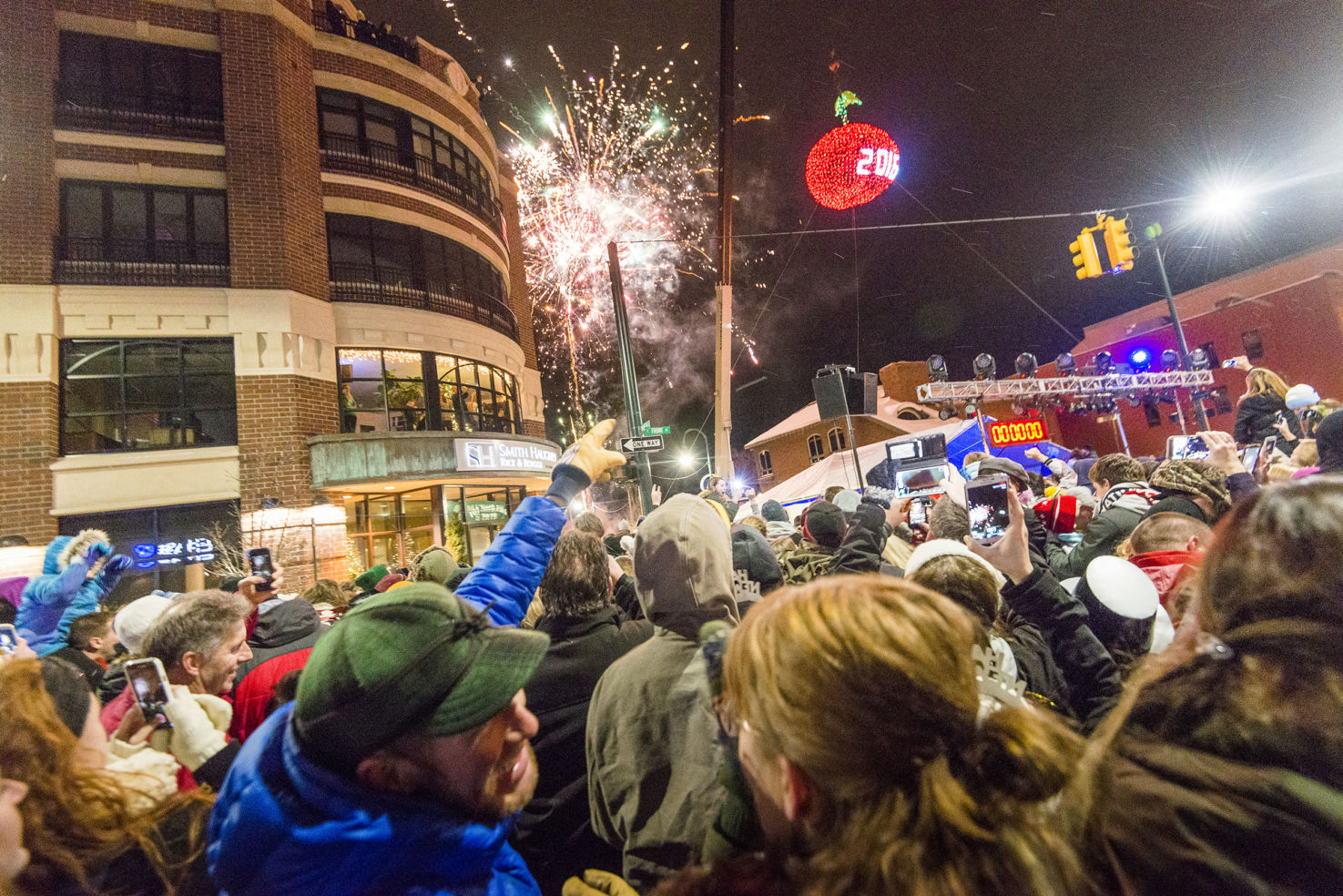 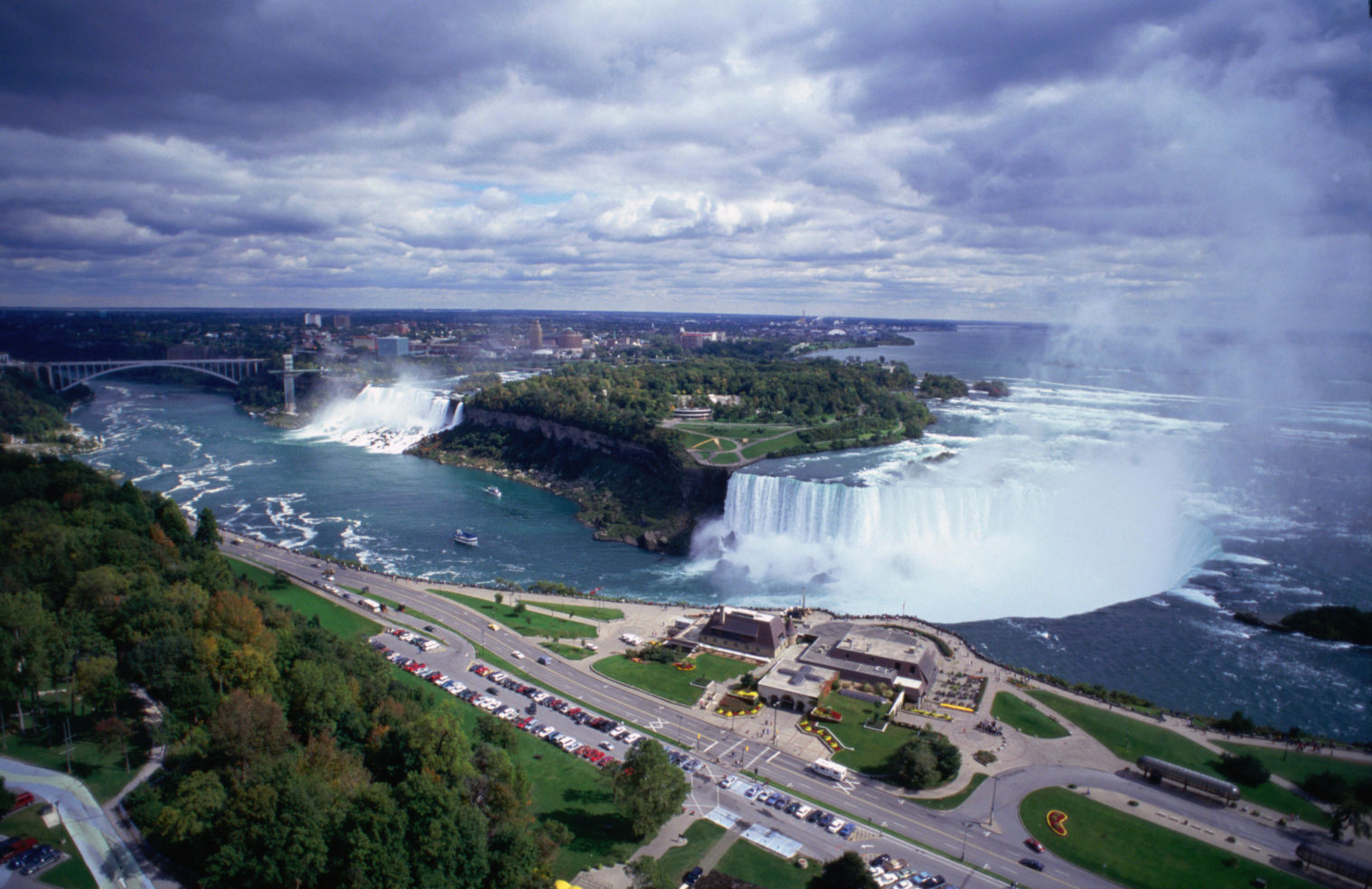 The fireworks at Baltimore's Inner Harbor Ampitheater, which starts at 9PM and features live music, caps off a day of events that include ice skating, a dinner cruise, and activities for kids at the Maryland Science Center.

Baltimore Office of Promotions & The Arts

Kids get their own ball drop at Panama City Beach. At 8PM, 10,000 beach balls will fall from nets along the Gulf of Mexico's shoreline. Adults will want to stick around for the midnight Beach Ball Drop, a tropical version of the iconic Times Square event, but this one has fireworks.

Whistler’s Village, an alcohol-free zone, offers a range of family-friendly goings-ons, including an early evening ball drop, as well as a dance party for teens. After the kids head to bed, grownups can stick around for fireworks, a daredevil ski event, and parties at bars and restaurants throughout the village. Tickets are required for most events.

Montreal marked its 375th anniversary in 2017, and the city closes out the year with free traditional sugar shack meals at Marché Bonsecours, an historic public market. Then DJs get the party gets underway at 7PM at Old Port and Place Jacques-Cartier followed by a showcase of local musicians at 10PM and fireworks to welcome 2018. Various clubs around town host their own ticketed events.

Now in its 23rd year, First Nigh Alexandria offers local and regional musicians performing in shops, museums, and public buildings throughout the city. There's also plenty of entertainment options for kids, a DJ later in the evening, and midnight fireworks on the Potomac River.

The annual Walleye Drop in Port Clinton, a small town known for the bounty of walleyes caught in Lake Erie. Thousands more than the municipality's 6,000 residents gather for the midnight drop of a 600-pound fiberglass fish and all kinds of local delicacies and quirky events.

Traverse City, Michigan, a world class beach town on the northernmost coast of Lake Michigan, shows its obsession with the region's key harvest each new year's eve. The CherryT Ball Drop, is a grand street party with live music. The local version of a ball drop features an illuminated cherry dropping to welcome 2018.

New year's eve at Niagara Falls is arguably one of Canada's most glorious spectacles, what with a concert in Queen Victoria Park, which offers the natural wonder as its backdrop. The all-Canadian lineup features Simple Plan, among others. Food and drinks are for sale all evening and fireworks against the waterfall wrap up the festivities.

A dozen downtown Salt Lake City, Utah, venues open their doors—and their arms—to welcome revelers for not just one day, but two. But beyond that, from December 26 to the 31, EVE Winter Fest offers an embarrassment of riches of performances and activities, from DJs and big bands for grownups to bounce houses and play rooms for kids. You can hit all of it with the American First All-Access Pass. A grand DJ-fueled party which includes the Mirror Ball drop, takes place on the final two nights. Click here for tickets.

Baltimore’s Inner Harbor is the site of an epic fireworks display as 2017 turns into 2018. The free spectacle in the Inner Harbor Ampitheater starts at 9PM and features live music. Additionally, the Pandora ice skating rink the Inner Harbor is open until 12.30AM, so there’s plenty to do beside watch the light show. If you’re willing to shell out some cash, though, you can get a more private perch on a 21+ dinner cruise that leaves port at 9.30PM. The $83 price gets you hors d'oeuvres, a buffet dinner, a premium open bar, and a DJ-accompanied midnight champagne toast at midnight. Another non-landlubber option is a cruise on the Raven, a yacht featuring snacks and drinks at an additional cost, and views of the fireworks from the open top deck. There’s plenty for kids to do, too. Earlier in the day, from 10AM to 2PM, the Maryland Science Center plays host activities for kids, free with museum admission.

When it comes to family-friendly new year celebrations in Florida, you likely instinctively think Orlando. Think again. Turns out, Panama City Beach has one of the nation’s biggest kid-minded New Year’s jamborees. The main involves 10,000 beach balls falling from nets stretched across a Pier Park, an open space located across steps away from the Gulf of Mexico’s shoreline. Grownups will wanna stick around for the midnight Beach Ball Drop, which is perhaps best explained as the ocean side version of the Times Square ball drop, complete with fireworks an LED-lit beach ball descending from an 80-foot stainless steel tower as midnight 2018 arrives.

Whistler’s Village on Canada’s west coast hosts a sprawling family-friendly New Year celebration. The alcohol-free setting is a destination for live entertainment and arts and crafts events, including plenty of activities for kids ages 3 to 13 and a dance party for older teenagers. Wristbands that give access to all the venues cost $12.50 in advance, or $15 when purchased December 30 or 31. Once the kids head to bed, grownups can enjoy an electrifying fireworks show as well as a special edition Fire and Ice Show, a popular Whistler attraction involving daredevil skiers soaring through rings of fire. Seriously. The Resort Municipality of Whistler is providing free public transit within Whistler from 6PM on December 31, 2017 to 4AM on new year's day. Restaurants and bars are each hosting their own events, many without a cover charge.

It's going to be tough for Montreal to top last year's new year's celebration, what with 2017 marking the city's 375th anniversary. But from the looks of it, revelers in this Euro-chic city, won't be disappointed. First, though, the anniversary year comes to a close starting at noon at Marché Bonsecours, an historic public market, with free traditional sugar shack meals (see: pea soup, tourtière, and poudding chômeur) until the food runs out. Then the grand New Year's Party kicks off at Old Port and Place Jacques-Cartier at 7PM with DJs, then the main event--a showcase of local musicians--gets underway at 10PM. From there, it's countdown to midnight, marked by a magnificent fireworks spectacle. DJs will keep people dancing on into 2018 with music until 2AM. Skating at Old Port's Bonsecours Basin runs through 2AM. Various clubs throughout the city host their own ticketed events.

Leave it to Nashville to throw an boot-stomping, music-fueled party to ring in the new year. The Jack Daniel’s Music City Midnight at Bicentennial Capitol Mall State Park is a free public shindig, complete with live music by some of Nashville’s biggest stars, Keith Urban, Cheap Trick, and Maren Morgan not least among them. A music note drop and fireworks will welcome 2018. Jack Daniel's does everything it can to enforce responsibility, so to that en, the local county sheriff’s office will offer Sober Ride, a service for anyone needing a free ride home.

We can’t think of a better place to usher in the future than in a setting that evokes the past, like Alexandria, Virginia, where the streets are lined with 18th century houses. The town’s First Night, now in its 23nd year, is a grand street party, as shops, museums, churches and public buildings are transformed into performance venues for all kinds of regional musicians. Magicians and clowns are just a few of the things to keep kids entertained all day. Later at night, a DJ will rev up the crowd starting at 10.30PM, then fireworks along the Potomac River will launch 2018.

Port Clinton, Ohio is a pretty small coastal town (population 6,000), but they celebrate New Year’s Eve in a big way. This year marks the 21th Walleye Drop, a nod to the fish locals catch in Lake Erie. The celebration might sound like something out of a Tim Burton movie, what with the highlight being a 20-foot-long, 600-pound fiberglass fish dropping from the sky like the Times Square ball, but thousands of people from around the world go to bear witness and sample all kinds of walleye delicacies, from chowder to popcorn, and even wine. As if that isn’t quirky enough, there’s also the annual “Rock, Paper, Scissors” championship.

Nobody ever accused Portlandians of having too little fun. The city’s biggest party this year is Vote for Dancing, a full-on, no-holds-barred multi-day dance party at Jimmy Mak’s, one of the Northwest’s most notable jazz venues. Live performers and DJs run the gamut from indie rock to electronica to heavy metal tributes. There's even a yoga teacher for those looking to welcome the new year with a deep breath.

Massachusetts. Florida, and California each boast world renowned beach towns, but Michigan gives them a run for their money in the waterside resort vacation game. From skiing to wineries to shopping to regular symphony performances and other musical concerts, Traverse City, Michigan, on the northern coast of Lake Michigan, has all the fixings of a beach town. On the new year, the city hosts CherryT Ball Drop, a grand street party with live music in it downtown. It offers the Midwest version of a ball drop to ring in the new year: an illuminated cherry descending as the clock counts down.

One of the world’s most wondrous sites, Niagara Falls, is the backdrop to a free New Year’s Eve concert in Queen Victoria Park, which features a roster of Canadian musicians, mult-platinum wunderkinds Simple Plan not least among them. There will be food and drinks for sale as well as a kid-free outdoor pavilion. Anywhere, however, is a good spot for viewing the fireworks display that lights up the Falls as the new year arrives. Festivities begin at 8PM. Various hotels and restaurants in the area are offering their own holiday dinners and events.