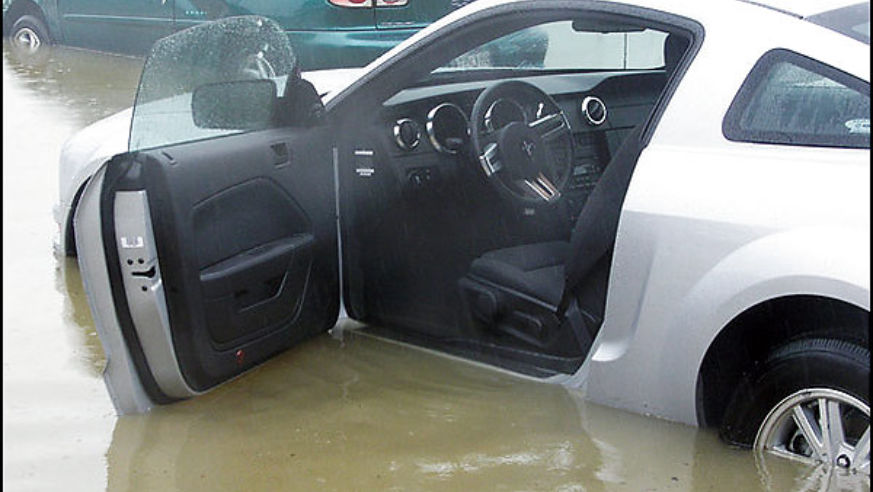 On my recent trip to Maryland, the innkeeper knocked on my door at 7 A.M. to break the news: After a night of heavy rains, the Oxford Inn's parking lot had been transformed into a marina--with my rental car right in the middle.

On my recent trip to Maryland, the innkeeper knocked on my door at 7 A.M. to break the news: After a night of heavy rains, the Oxford Inn's parking lot had been transformed into a marina--with my rental car right in the middle.

I waded with the innkeeper out to the car, which had some 10 gallons of the Chesapeake Bay sloshing around the floorboards. The innkeeper offered to take the wheel. He sat down in the wet seat and, miraculously, the engine started up. He slowly backed the car out of two feet of standing water. After an hour of bailing out the interior and towel-drying the seats, I called Hertz. A customer-service agent told me to return the car to a nearby office, where it was replaced.

Rental agencies say that the decisions I made were acceptable, but unanimously agree that anyone in such a situation should immediately call roadside assistance. "We'd never advise you to get in the car or do anything to put yourself in harm's way," says Susan McGowan, a spokesperson for Budget and Avis. When a car is drivable, as mine was, the agency will ask you to return it to the nearest rental location to get a replacement. If the car can't be driven, the agency should arrange for a tow and a new vehicle.

In retrospect, we probably shouldn't have even tried to start the car, because we could have done major damage. "If water gets into the transmission, it can lead to bent connecting rods and broken pistons," says Michael Calkins, a manager at AAA's Approved Auto Repair program. "Muddy water in the engine creates extreme wear due to the lack of lubrication."

Calkins recommends that if the water is more than halfway up the wheels, you should go ahead and get the vehicle towed. But if the water's lower than that, chances are the car will run just fine. "Don't ever attempt to move a car if there are downed power lines nearby or if there might be flash floods or some other dangerous situation," Calkins says. "It's always a judgment call. If you anticipate that the water will slowly continue to rise, it's a good idea to move the car to minimize damage."