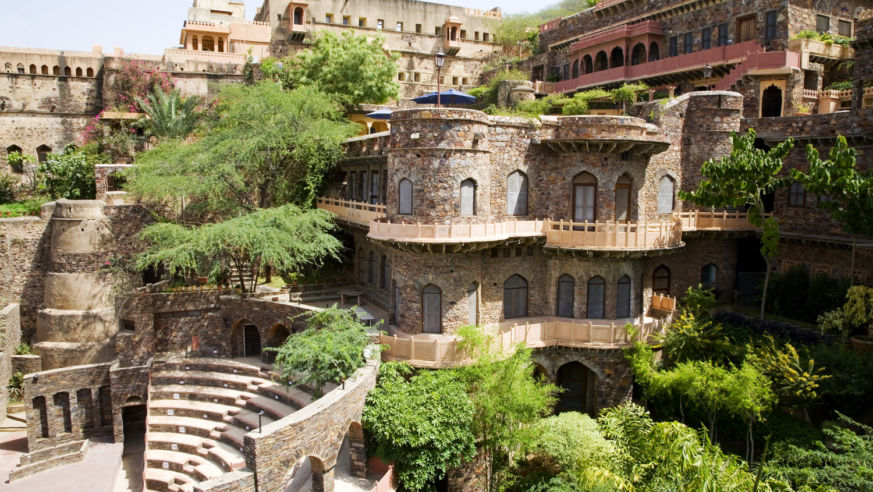 You don't have to be royalty to vacation like a king (or a queen). Turreted spires, stone archways, and centuries-old charm are all within reach. You just have to know where to look.

With a spectacular setting of 350 acres full of towering woods and tidy gardens along the shores of Lough Corrib, Ashford dates all the way back to 1228. The 83-room gray stone castle was once the property of the Guinness family (yes, as in the beer), so it's practically Irish royalty. Transformed into a five-star luxury hotel in 1939, Ashford has since welcomed celebrities and discriminating travelers alike who come to experience not just exemplary dining and service, but also fresh-air fun: Riding, shooting, archery, and a robust game of golf are just some of the ways to fill your time during a visit here. Double rooms from $139 per person per night, 800/346-7007, ashford.ie.

Built in 1698 by James Tillie, Pentillie Castle has had a fair share of drama—Tillie scandalously married the widow of his employer and still managed to squeeze a knighthood out of King James II. But its checkered past hardly detracts from Pentillie's enviable location on the banks of the River Tamar, not far from Plymouth. The yellow-hued castle is surrounded by gardens bursting with rhododendron, azalea, and camellia flowers, and most of the estate's 2,000 acres is still tenant-farmed, with some woodlands reserved for pheasant hunting. The hotel has nine double rooms, making Pentillie Castle a favorite location for intimate weddings. Double rooms from $75 per person per night (breakfast included), 011/44-1579-350-044, pentillie.co.uk.

3. CASTLE OF THE FOUR TOWERS

This 807-year-old castle made of red brick has a commanding view of Siena from its hilltop position. Originally built as a private home in the 14th century, the castle's location turned out to be as strategic as it was picturesque, and the building served as a 15th-century fortress during the period of civil strife that the marked the region until peace was restored in the 16th century. Once again a private residence, rooms and suites can now be rented, including a spacious one-bedroom apartment that sleeps up to four people. Visitors can wander the maze in the garden or stroll in the olive groves or vineyards, or hop in the car and tour the rest of sun-kissed Tuscany. From $46.75 per person per night, sleeps up to four people, 011/39-339-497-7999;quattrotorra.it.

A nice Czech waltz is the only thing missing from the fairy-tale atmosphere at Château Krasna Lipa, located in Czech Saxon Switzerland. Built in 1886, this fanciful palace has turrets and Juliet balconies; not to mention gracious rooms with 14-foot ceilings, furnished with antiques, hand-carved furniture, and Rococo oil paintings. The surrounding area is home to lush forests that invite romantic souls to discover intricate rock formations—and crystal-clear lakes and rivers—also prime fishing areas. Now a vacation rental, the castle has eight luxury suites with private baths and flat-screen TVs—some suites have walk-out terraces with panoramic views. As with any dream trip, excellent service is a must, and Krasna Lipa delivers: Private tour-guides and interpreters are available to guests, as are pick-ups from Prague airport (80 miles away) or the nearby Decin railway station. Double rooms from $50 per person per night (breakfast included), 1/416-529-1523,romantic-chateau.com.

Any castle situated just off Germany's famed "Castle Road" has to earn its keep, and 803-year-old Schloss Sommersdorf does so by sheer longevity. The 14th-century structure endured a period of upheaval during the Thirty Years' War in the 17th century, but its graying façade, bricked turret and moat are still standing. Visitors can stay in three apartments or two rooms in the castle proper, or opt for more modern accommodations in the newly renovated Bohemian House, on the castle grounds. On the road between Niederoberbach and Grossenried, Schloss Sommersdorf is ideally located for exploring a portion of the 621-mile Castle Road—and there's a unique fleet of cars available for guests to rent, including a 1905 Cadillac, a 1913 Ford "Tin Lizzie," and a 1926 Durant Rugby R touring model. Double rooms from $56.50 per person per per night (minimum 3-night stay), 011/49-9805-91920, schloss-sommersdorf.de.

Being a country with a strong Moorish history, Spain has thousands of castles. Narrow down the options with Paradores of Spain, a website that lists dozens of castles, fortresses, convents, and palaces throughout the country that have been converted into hotels. Our favorite, the 14th-century Arabic-inspired Parador de Carmona, is named for its town, about 18 miles from Seville. Inside, a graceful Moorish courtyard, vaults, and columns combine with antique Spanish furnishings to create a four-star experience reminiscent of times gone by. Deal hunters should check for discounts on multi-night stays (20 percent off) and for seniors (30 percent off). If you'll be exploring the area, consider purchasing the site's five-night card for $699, which is good at almost all Paradores and averages out to a discounted  $139 per night. Double rooms from $112 per person per night, 011/34-95-414-1010, paradoresofspain.com.

Few castles that saw battle during the Hundred Years' War have come through as elegantly as the Château du Peyruzel, a 13th-century fortress about three miles from the town of Domme in the Dordogne wine region. From its location high on a hill, the château commands a view of the valley below, full of hay bales and cows; windows in all four towers let in copious amounts of sunlight. With massive stone walls hewn from bedrock, a five-story spiral staircase, chestnut floors, and ceiling beams of darkened walnut, the château screams "Middle Ages," but has been equipped with every amenity the 21st century has to offer: a 45-foot-long swimming pool, luxurious bedding and linens, satellite TV and Wi-Fi (and, perhaps most important: indoor plumbing). From $67 per person per night, sleeps up to 14 (reservations available by the week only), 1/916-837-0934; vrbo.com.

For those venturing beyond the ancient feudal domains of Europe, there are still castles to be explored, such as this incredible 10-story fortification in Rajasthan, India. Completed in 1464, the Neemrana Fort-Palace's three-acre estate is built in a horseshoe shape into a hillside on the Delhi-Jaipur highway, about 62 miles from Delhi International Airport. The rooms are furnished with traditional Indian and colonial pieces and most have private balconies with views of the 60-mile-high Aravalli mountain range. Within the walls of the fort, guests can take a dip in the vista pool, sign up for free yoga and meditation exercises, or request holistic rejuvenation treatments. Double room from $38.50 per person per night, 011/91-941-405-0068, neemranahotels.com.

Like many things in L.A., the Hollywood Castle is playacting—it was built in the 1970s. But the castle's charm is still tangible, with ivy-covered walls, a moat with a drawbridge, and rooms furnished with suits of armor and huge thrones serving as chairs. Located on a full acre of land just beneath the Hollywood sign, the hotel has eight rooms (some with shared bathrooms) and three patios with 360-degree views of the sparkling city below, plus a Jacuzzi and a nightclub. From $83 per person per night for a two-bedroom, two-bathroom suite that sleeps up to six, 323/868-4076, thehollywoodcastle.com.

Standing high on a bluff overlooking the St. Lawrence River, the turrets and towers of Fairmont Le Château Frontenac are part of the identity of Old Québec, which has been designated a United Nations World Heritage Site. Named after Louis de Buade, Count of Frontenac, who served as governor of New France from 1672 to 1682 (and again from 1689 to 1698), the Château Frontenac proudly displays the Count's coat-of-arms on the outside wall of the entry arch. Though the impressive castle looks positively medieval, the oldest section of the 618-room hotel, the Citadelle, dates back only to 1899. The Fairmont has been a bastion of gracious living ever since, with four-star service and renowned Chef Jean Soulard's in-house restaurant. Double rooms from 6;111 per person per night, 866/540-4460, fairmont.com/frontenac.