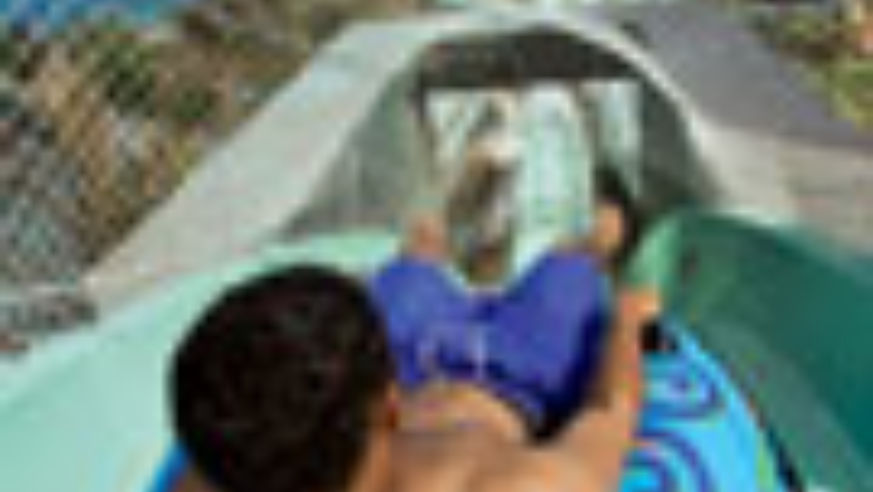 You're All Wet--and You're Loving Every Minute of It
To say that Atlantis's new water park is over the top is an understatement; it's over the top and down and around and back up and over again. "Aquaventure covers 63 acres," says Mark Gsellman, manager of the Bahamas resort's marine and water park operations, "and there's something new around every corner." The nexus of all this fun is the Power Tower, a 125-foot-tall green structure that's home to a new slide called the Abyss. The ride starts with a near-vertical, 50-foot drop in complete darkness and ends with a fall into an underground pool that appears to be filled with alligator gars--angry-looking fish with sharp teeth. In between is a series of twists, turns, and special effects that add up to 14 seconds of totally wedgifying high-adrenaline excitement. In addition to the Abyss, Aquaventure features three inner-tube slides and a mile-long river loop that alternates sections of calm and white water. (Waves can reach as high as seven feet.) Best of all, a set of conveyor belts connects the slides to the river loop, so you never have to get out of the water. Access is free for anyone staying at Atlantis; at press time, the resort planned to sell day passes to nonguests for around $100. 888/528-7155, atlantis.com.

Eat Your Heart Out, Sir Edmund Hillary!
When Walt Disney World's Expedition Everest opened last April in the Animal Kingdom, it was the culmination of six years of work by Disney Imagineers, combined with 1,800 tons of steel and an estimated $100 million. Based on the myth of the yeti, the Abominable Snowman and protector of Everest (which Disney scaled down from a height of 29,000 feet to 199 feet--still enough to make it the second-highest summit in Florida), the ride speeds passengers down an 80-foot drop and spirals them forward and backward through foggy ice caves. The real heart-stopper, though, is a very close encounter with the yeti itself. The audio-animatronics that power the beast are the most sophisticated Disney has ever produced. 407/939-1289, disneyeverest.com, $67.

On a Clear Day You Can See L.A.
The Empire State Building? The ape can have it. Top of the Rock--the newly reopened observation decks atop the GE Building in Rockefeller Center--is superior in every conceivable way. First, there are the views: Instead of the Empire State Building's jailhouse bars, you get glass panels that look like they were washed that morning; the first floor (of three total) also has large indoor areas for those who'd rather not venture outside. Second, the top floor, because it's set back from the edge of the building, has totally unimpeded views. Third, the art deco details will take your breath away; wandering around, you feel a bit like Lex Luthor in his evil (but sumptuous) aerie. Fourth, the visitor experience is infinitely better: The workers treat you like a human being, rather than use the fact that you're waiting in line as an opportunity to give you the hard sell. Fifth, even the marketing partnership is neat: In the Target Breezeway, all the surfaces are covered with lights that follow you around. Finally, there's the elevator ride. Stand in the back of the car, to the right as you enter. Then look up. 877/692-7625, topoftherocknyc.com, $17.50.

That's What We Call Rapid Transit
Not only is the U.S. National Whitewater Center in Charlotte, N.C., the biggest man-made white-water park in the world, but the course--which was designed by engineer and four-time world-champion kayaker Scott Shipley--shares its DNA with great rapids across the globe. "I wanted to improve upon existing elements in nature and those found in Olympic white-water parks in Europe and Australia," says Shipley. "A part of the big rapid was inspired by the one in South Carolina that Deliverance was shot on." Fueled by pumps that circulate 536,000 gallons of water per minute (enough to fill an Olympic-size swimming pool every 70 seconds), the river provides consistent Class II, III, and IV rapids throughout four channels of varying difficulty. When kayakers and rafters reach the end, they're whisked back to the top by a 180-foot-long conveyor belt. "It's like a ski lift for boats," says Shipley. An official Olympic training site, the U.S. National Whitewater Center will also host the 2008 Olympic kayak team trials. But it has been open to the public since last September, so you too can learn how it feels to train like a champion. 704/391-3900, usnwc.org, from $29.

Art That Moves People in More Ways Than One
Spiraling like tendrils through the soaring Turbine Hall in London's Tate Modern, the five Test Site slides by German artist Carsten Höller aren't just riveting to look at; they're fun, too. "Most people associate slides with playgrounds," Höller said in October, shortly before the installation opened to the public. "But there is no reason why they should be for children only." Judging by the giddy screams that echo through Turbine Hall each day, museumgoers absolutely agree. From Level 5, where the highest slide begins, it's an exhilarating plummet down 180 feet of steel and clear plastic to a padded landing area 87 feet below. Too scary? The shorter glide from Level 3 and the small, mirror-image chutes on Level 2 are positively restful in comparison. (The slide from Level 4 is already closed for another exhibition.) Timed tickets are required for Levels 3 and 5 (but not for Level 2); they're issued daily at the Tate. Hurry, though: Test Site closes on April 15. After that, you'll have to be satisfied with the tiny Höller slide that's on permanent display at Berlin's Kunst-Werke museum--or become good friends with fashion designer Miuccia Prada, who had a Höller slide installed inside her Milan office (it whisks her down to her parking space). 011-44/20-7887-8888, tate.org.uk, free. Note: Carsten Höller's Test Site closed April 15, 2007.

Sleep Tight! Don't Let the Walrus Bite!
Since January, a sleepover program at the American Museum of Natural History in New York City has allowed families with kids ages 8 to 12 to have their own Night at the Museum adventure. The dinosaurs don't rampage like they do in the movie, so kids wander around with a flashlight to find the beasts themselves. (They're on the fourth floor.) "Everything is dark and creepy in a good way," says 10-year-old Alex Mattei of Irvington, N.Y. Even for adults, the planetarium show will feel extra trippy because it's so far past bedtime. But there's a fine line between thrilling and scary when you're a kid, so parents would do well to arrive early enough to claim cots with a view of, say, cute harp seals, as opposed to a sperm whale and giant squid locked in combat. The $79 price tag (regardless of age) includes a cot, snacks, breakfast, admission to the museum the next day, and a goodie bag with a key chain and stickers. 212/769-5100, amnh.org.

When They Say a View of the Water, They Really Mean It
Boston's new Institute of Contemporary Art cuts a dashing figure, thanks in no small part to the galleries that are cantilevered four stories above the edge of Boston Harbor. Designed by Diller Scofidio + Renfro, the museum was built to showcase the institute's first-ever permanent collection, but the most popular spot has quickly become the Mediatheque, where 18 computers display digital media related to the artists and exhibitions. It's not the computers that are drawing crowds, however; it's the fact that the media center points down at a 24-degree angle from the underside of the cantilever. At the end of the room, there's a 21-foot-wide picture window framing a mesmerizing view of the water's surface. (No surrounding land or sky is visible.) "We describe the experience as vertiginous," says Jesse Saylor, a member of the architects' design team. "When you enter the room, you all of a sudden realize you're floating above the water." The Institute of Contemporary Art, icaboston.org, $12.

Surf's Up, Dude! (Thirteen Stories Up, to Be Precise)
Forget chasing an endless summer--now there's an endless wave. People have been lining up to surf onboard a cruise ship since Royal Caribbean launched Freedom of the Seas last May. The FlowRider is a continuous wave created by a six-inch sheet of water that rushes up an incline to keep surfers in position. "The FlowRider is the exact opposite of ocean surfing, where you move with the wave," explains Royal Caribbean sports supervisor Mitch Brooks. "It's like wakeboarding, without the boots and the lines." Falling doesn't actually hurt because the slope is made of a trampoline-like surface, but don't under- estimate the force of the flow. Hit the water and BOOM!--you're immediately swept up the wave and spat out at the top in a rush of foam, accompanied by the groans of spectators in grand-stands that wrap around three sides of the pool. Freedom of the Seas is the first of three Royal Caribbean ships to have a FlowRider; the second ship of the series, Liberty of the Seas, debuts next month. 866/562-7625, royalcaribbean.com.

This Puts the "High" in Ohio
You no longer have to go to the southern hemisphere to do a bridge climb like the famous one in Sydney. North America's first bridge climb--up the Purple People Bridge, which spans the Ohio River and connects Cincinnati and Newport, Ky.--opened last June. First, you put on a yellow-and-purple jumpsuit, and then you get fastened to a cable system (you stay hooked to the bridge at all times). The journey to the bridge's apex, about 150 feet above the water, isn't for acrophobes: You walk along narrow walkways and up steep staircases, more than 250 steps in all. But the views are magnificent. Climbers cross a 35-foot-long section of walkway made of glass (those who dare to look down will see the river churning below) before descending on the other side. 859/261-6837, purplepeoplebridgeclimb.com, $30.

Ever Looked a Killer Bird Right in the Eye?
At 6'5" and 130 pounds, the southern cassowary is the world's most dangerous bird, known to land fatal blows with its large claws. Close encounters with the cassowary and 6,000 other creatures are a daily occurrence at Sydney Wildlife World, a 75,000-square-foot indoor park that opened in September on Darling Harbour, in the heart of the city. Nine habitats house 130 species unique to Australia, from the cute and cuddly (koalas, wallabies) to the creepy and crawly (rhinoceros cockroaches, bearded dragons, golden orb spiders). There are opportunities to interact with animals throughout the park. Birds swoop overhead during daily feedings in the two-story aviary. Keepers wander about with lizards and sugar gliders (small gray possums), fielding questions and posing for pictures. And for $16, you can get your photograph taken alongside a koala hugging a eucalyptus tree, or with a python dramatically draped across your shoulders and arms. 011-61/2-9333-9288, sydneywildlifeworld.com.au, $21 (90-minute VIP tours are also available for $110).