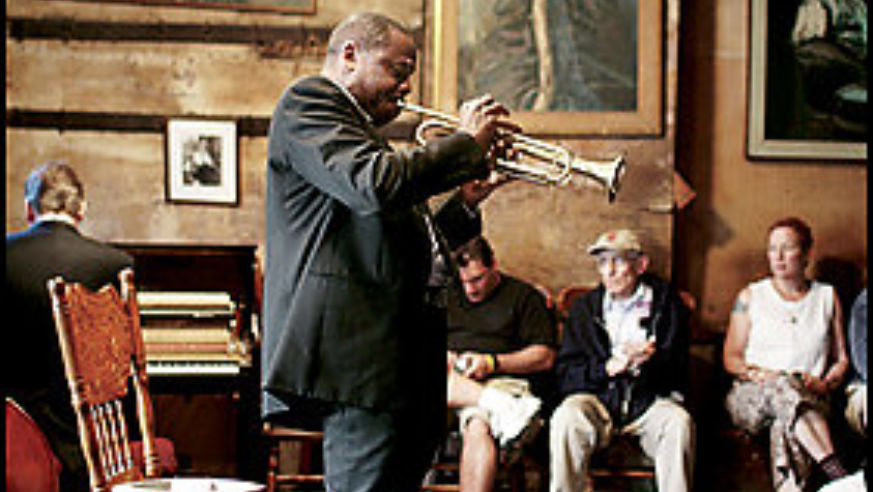 You thought a hurricane or two could keep this city down?

1. Sobering thoughts
The French Quarter may be one of the nation's main party zones, but it has its quiet spots. Duck into Kitchen Witch Cookbooks and you just might find a first-edition M.F.K. Fisher (631 Toulouse St., 504/528-8382, kwcookbooks.com). Arcadian Books & Art Prints is a tight squeeze, but it's a trove of books about Louisiana's history and culture (714 Orleans Ave., 504/523-4138).

2. They put the art in party
Held the third Saturday of every month in Markey Park, the Bywater Art Market showcases local artists and a food truck that sells boudin balls (breaded and fried sausage). You'll find paintings, photography, jewelry, and boxes made from recycled lumber. Royal St. and Piety St., art-restoration.com/bam, 9 a.m. to 4 p.m.

5. Take me to the river
Audubon Park is an urban paradise for golfers, runners, bikers, picnicking families, and napping students. Audubon Zoo is on the grounds, along with one of the city's best views of the Mississippi. At sunset, crowds gather at the riverbank with soccer balls, six-packs, and peel-and-eat crawfish. auduboninstitute.org.

6. Helping hands
Brad Pitt's Make It Right Foundation is helping to rebuild the Lower Ninth Ward, with an initial goal of constructing 150 affordable, relatively hurricane-resistant homes (makeitrightnola.org). More than a million people have donated elbow grease, money, and time, and the state of Louisiana has a website—volunteerlouisiana.gov—for people looking to lend a hand.

8. Catch-as-catch-candy
The first Roman Candy Man, Sam Cortese, entered the taffy-pulling trade in 1915 after he lost his legs in an accident. Today, his grandson Ron Kottemann traverses New Orleans in Sam's old mule-drawn cart, selling vanilla-, chocolate-, and strawberry-flavored Roman Chewing Candy, while Ron's son Daniel sells his wares from a cart at the zoo. romancandy.gourmetfoodmall.com, 75¢.

9. Iris fidelis
Louisiana's state flower is the magnolia, but the fleur-de-lis is the ultimate expression of New Orleanian loyalty. Since Hurricanes Katrina and Rita, the iris has been a top choice for tattoos. For a less permanent memento, check out Mignon Faget jewelry (multiple locations, mignonfaget.com) and Scriptura stationery (5423 Magazine St., 504/897-1555, scriptura.com).

10. Storied history
It's nearly impossible to make it through a day without hearing about the voodoo priestess Marie Laveau, or the pirate antihero Jean Lafitte, or how much of the French Quarter's architecture is actually Spanish. Get beyond local lore at The Historic New Orleans Collection, a museum and research center. 533 Royal St., 504/523-4662, www.hnoc.org, free, tour of the permanent collection $5.

12. A ringing endorsement
"We're known internationally but not so much locally," says Jill Abbyad, who has run Chimes Bed & Breakfast with her husband for 22 years. Guests enter through a side gate and access the rooms from a communal courtyard. 1146 Constantinople St., 504/899-2621, chimesneworleans.com, from $99.

13. Let the good times roll
Mid City Lanes Rock 'n' Bowl is one of the hottest venues for Louisiana-style music and dancing. The ambience is retro, and the clientele is multigenerational. Thursday is Zydeco Night. 4133 S. Carrollton Ave., 504/482-3133, rockandbowl.com, $18 per lane per hour.

14. Rifling through architecture
A shotgun house is a narrow, often one-story affair with each room situated behind the other. (The idea is that if you fired a shot at the entrance, it would travel through every room and out the back.) The city's shotguns tend to be colorfully painted; a row of them strikes a picturesque pose. Driving through the Upper Ninth Ward, Bywater, Faubourg Marigny, Irish Channel, Uptown, and Riverbend neighborhoods provides concentrated viewing. New Orleans' Favorite Shotguns, by Mary Fitzpatrick and Alex Lemann, is a useful companion; buy it at the Preservation Resource Center. 923 Tchoupitoulas St., 504/581-7032, prcno.org.

16. Stars in stripes
Seersucker is a summer staple in New Orleans. Perlis, a favorite local clothing retailer, is the place to go to outfit the entire family. Flagship store, 6070 Magazine St., 504/895-8661, perlis.com.

17. What's old is new
A close cousin to the old-fashioned, the modern-day Sazerac is a cocktail incorporating rye, Peychaud's Bitters, pastis, sugar, and a lemon twist. Try one at the Hotel Monteleone's rotating Carousel Bar. 214 Royal St., 504/523-3341, hotelmonteleone.com.

18. Gumbo guidelines
Every Louisianan has a set of rules about the famous stew: A gumbo must contain a roux; or, a roux isn't necessary if you use okra; or, okra should be used only in seafood gumbos. To taste multiple styles, visit the Gumbo Shop in the French Quarter. 630 St. Peter St., 877/525-1486, gumboshop.com, gumbo from $8.

19. A fresh approach
New Orleanians enjoy changes of seasons—seafood seasons, that is. That means oysters during fall and winter, crawfish in spring, and shrimp and crabs all summer long. Casamento's Restaurant, located Uptown, is famous for its raw oysters and fried-oyster loaf (4330 Magazine St., 504/895-9761, casamentosrestaurant.com, oysters $8.75 per dozen). Big Fisherman Seafood specializes in boiled crawfish (3301 Magazine St., 504/897-9907, bigfishermanseafood.com, crawfish $2.50 per pound). And Tommy's Cuisine is revered for its crabmeat au gratin (746 Tchoupitoulas St., 504/581-1103, tommyscuisine.com, entrées from $21).

20. Magnificent MiLa
Slade Rushing and Allison Vines-Rushing fell in love as young cooks in New Orleans roughly a decade ago and then moved to Manhattan to pursue their big-city dreams. Now they've returned to the South and opened MiLa (an amalgam of Mississippi and Louisiana); they take the products of an area farm and turn sweet potatoes into pappardelle and muscadine wine into a dessert gelée. Renaissance Pere Marquette Hotel, 817 Common St., 504/412-2580, milaneworleans.com, entrées from $19.

21. Southern hospitality
Two blocks from the French Quarter, the International House hotel offers New Orleans–style glamour with a nod to the city's penchant for superstition. In the plush lobby, a West African fertility bench is covered with so many pillar candles that it seems more like an altar than a decoration. Rooms have bedside tables with cruciform feet, said to act as talismans for guests. 221 Camp St., 800/633-5770, ihhotel.com, from $119.

23. Progressive parties
Social Aid and Pleasure Clubs celebrate local traditions by high stepping through the streets in what are called second-line parades. There's always a brass band and sometimes outfits with sashes and feather fans. For routes and to learn more about second-line traditions, visit the Backstreet Cultural Museum. 1116 St. Claude Ave., 504/287-5224, backstreetmuseum.org, $8.

25. You're invited!
Festival season runs spring through fall, and if there's a town, a food, a craft, or a cause, Louisiana celebrates it. You might know the biggies: the New Orleans Jazz & Heritage Festival (Jazz Fest), French Quarter Fest, and Essence Fest. But what about the Creole Tomato Festival? Or, 85 miles southwest of the city, in Morgan City, the Shrimp and Petroleum Festival? neworleansonline.com/calendar.