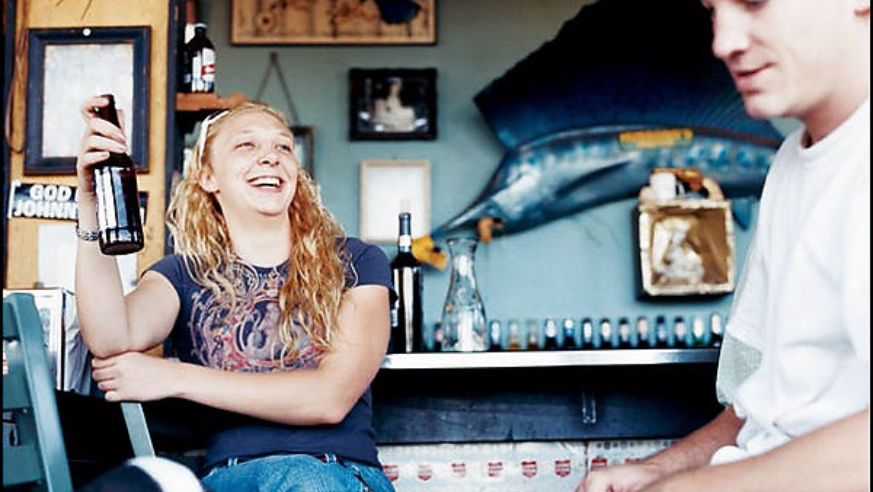 Everything is bigger in Texas: In Alamo City, that means the world's largest cowboy boots and 'ritas by the liter.

1. Recycling with a twist

The bartenders at La Tuna Ice House toss bottle caps into a metal box located behind the counter and then dump the contents into the outdoor seating area every night. Some caps are rusted orange--La Tuna celebrates its 15th anniversary next year--while others still flash their logos. Drinks are ordered inside a corrugated-aluminum shack (pictured) and then taken out to picnic tables beneath shady pecan trees. A fire pit made from a warped manhole cover keeps customers warm on chilly winter nights. 100 Probandt St., 210/224-8862, beer $1.50.

Many locals jump-start their day with a strong cup of coffee and two soft flour tacos--often with salty chorizo and fried potatoes in one, and mashed pinto beans with melted cheddar in the other. You can't drive a block without passing a taqueria, but aficionados head straight to Taco Haven, where a THIS IS TACO COUNTRY sign is painted near the door. 1032 S. Presa St., 210/533-2171, from 99¢.

4. On the shopping block

La Villita is a charming two-block stretch of adobe and wood buildings that made up the city's first neighborhood, settled by Spanish soldiers and Native Americans at the end of the 18th century. On weekends, couples dance in the public squares, then explore shops like Mustang Grey's, which is stocked with cowboy hats and belt buckles. 303 S. Alamo St., 210/222-1894, buckles from $12.

5. Boots made for gawking

The world's largest pair of cowboy boots stand in the parking lot of the North Star Mall, not far from the airport. Made of concrete, they're 40 feet tall, 20 feet long, and 35 feet wide--and even though they've been there for nearly 30 years, no one seems to know exactly why. 7400 San Pedro Ave., 210/342-2325, northstarmall.com.

One of the city's best-kept secrets is the Mission Drive-In Theatre, where teenagers sprawl on the hoods of their cars to watch the double feature. Bats occasionally flit across the screen, and once an hour, the actors' lines have to compete with the bells tolling at the nearby Mission San José. 3100 Roosevelt Ave., 210/496-2221, santikos.com, $7.

Schilo's Delicatessen opened in 1917 selling schnitzels, split pea soup, and the only kind of beer that was legal during Prohibition. Although the famous root beer isn't made on-site anymore, it's still served in a frosted mug with a two-inch head (the secret is egg whites). Best of all, every order comes with a free refill. 424 E. Commerce St., 210/223-6692, root beer $1.35.

The Riverwalk Vista Inn is housed in the top two floors of a converted 1883 warehouse. Chock-full of original architectural details--including pine floors, brick walls, and high ceilings--each guest room is named for the landmarks visible from the 4-by-10-foot windows. 262 Losoya St., 866/898-4782, riverwalkvista.com, from $110.

Inside the Alamo's cool, dimly lit stone church--the site of hand-to-hand combat during a 13-day siege in the spring of 1836--glass cases hold personal effects of the men who died there, including Davy Crockett's buckskin vest. Docents give trivia-filled lectures twice an hour. Few visitors realize, for example, that Spanish soldiers stationed at the Mission San Antonio de Valero in the early 1800s nicknamed it Alamo, or cottonwood, for the trees that grew in abundance nearby. 300 Alamo Plaza, 210/225-1391, thealamo.org, free.

Linda Pace, of the Pace salsa family, opened Artpace in a former Hudson automobile showroom in 1995. Every year, the gallery accepts nine artists into a two-month residency program. Each session begins with a potluck dinner, open to all, to introduce the newcomers to the public, and ends with exhibitions of work the artists completed during their stay. 445 N. Main Ave., 210/212-4900, artpace.org.

Carl Hilmar Guenther moved his Pioneer Flour Mills from Fredericksburg, Texas, to San Antonio in 1859, lured by the reliable waterpower provided by the river. Today it's the oldest family-owned and operated mill in the country. The Guenthers' former home--on the same property--has been turned into a restaurant. Naturally, all the buttermilk pancakes and gravy-covered biscuits are made with Pioneer flour. 205 E. Guenther St., 210/227-1061, guentherhouse.com, biscuits $4.

When Spain declared war on the U.S. in April 1898, Theodore Roosevelt quit his job as Assistant Secretary of the Navy and cofounded the 1st U.S. Volunteer Cavalry regiment, a.k.a. the Rough Riders. Roosevelt, who hardly drank, hung out at the Menger Hotel bar, where he attempted to recruit cowboys and Texas Rangers to join his charge up the San Juan Heights in Cuba. The Menger seems little changed today, save for a display case of Rough Rider uniforms by the front door and a portrait of Teddy that hangs over the bar. 204 Alamo Plaza, 210/223-4361, cocktails $5.

The Southwest School of Art & Craft began offering classes in 1971 at what was once San Antonio's first school for girls. An old dormitory became retail space for handicrafts from across the country, including wall hangings made from old traffic signs and riveted silver jewelry, and the dorm cafeteria is now a café. When asked why the building's clock tower was built without a face on its north side, docent Joan Kay laughs. "Some say that since there was nobody living in that direction but the damn Yankees, why would we give them the time of day?" 300 Augusta St., 210/224-1848, swschool.org.

14. Getting piggy with it

The Blue Star Arts Complex combines 25 studios and galleries, a theater company, and a community youth arts organization in 137,000 square feet of former railroad warehouses. On the first Friday of every month, businesses in the complex and along South Alamo Street host an Art Walk late into the night. 1414 S. Alamo St., bluestarcomplex.com.

San Antonio's biggest draw these days isn't the Alamo, but rather River Walk. Stone steps lead from street level down to the footpaths, gardens, and restaurant patios that line the banks of the San Antonio River, where tour barges float lazily along a two-and-a-half-mile stretch of water. Now imitated all over the world, River Walk almost didn't exist. The city tried twice to pave over the river in order to control flooding, but community organizations fought back. In 1939, the Works Projects Administration stepped in and built River Walk according to the designs of local architect Robert H. H. Hugman, who had fond memories of fishing the river as a child. Rio San Antonio Cruises, 800/417-4139, riosanantonio.com, $6.50.

The Cortez family opened Mi Tierra Café y Panadería in 1941 based on the principle that more is better when it comes to decorating (think piñatas, Christmas lights, and metallic streamers) and portion size (margaritas are sold by the liter, and the pork tacos del mercado are nestled alongside mountains of beans and rice). Reservations are recommended on weekends, though there are certainly worse places to bide one's time than at the ornately carved oak bar. 218 Produce Row, 210/225-1262, tacos del mercado $9.

The Alamo is just one of five missions built by Spanish Franciscan monks in San Antonio; the other four extend south along the eight-mile Mission Trail. A visitors center adjacent to Mission San José includes a film detailing the monks' brutal treatment of the Native Americans they converted and then virtually enslaved. Descendants of the Native Americans still live in the area. 6701 San José Dr., nps.gov/saan, free.

Market Square, three blocks of stores and pedestrian-only streets just west of downtown, is the best place to go for fun Mexican kitsch like piñatas and sombreros. (The border is only 150 miles away.)

Despite the more than 40 miles of hiking and biking trails in the Government Canyon State Natural Area, the park's main purpose isn't recreational. Instead, it was created to protect and replenish the city's primary water supply, the Edwards Aquifer, which is located directly below the wooded canyon. 12861 Galm Rd., 210/688-9055, tpwd.state.tx.us, $6.

The Liberty Bar restaurant has a bit of a fun-house quality to it: Floors, ceilings, and window frames have sloped in different directions ever since the building's foundation shifted during a 1921 flood. But, as a neon sign outside advertises (it reads SERIOUS FOOD), the menu is no laughing matter. Chef Oscar Trejo is considered one of the city's finest. Bread is baked daily on the premises, and specials may include mesquite-grilled duck breast. On Monday nights, bottles of wine over $50 are half-off with dinner. 328 E. Josephine St., 210/227-1187, entrées from $6.

The world's only toilet-seat museum is in Alamo Heights, a 10-minute drive north of downtown. Barney Smith, the charming 85-year-old owner, uses a dentist's drill to carve designs in wooden toilet seat covers. "I'm a master plumber," he likes to say. "When I retired, I figured I should stay in the business." Smith greets visitors in his driveway and then gives them a tour of his one-car garage, which holds examples of his work. 239 Abiso Ave., 210/824-7791, by appointment, free.

23. Chihuly next to Chaucer

The Central Library doubles as a museum for public art. Neon installations by Stephen Antonakos diffuse blue light in the entryway; a nightscape of San Antonio in the '40s by local painter Jesse Treviño covers a lobby wall; and a glass sculpture by Dale Chihuly graces the second floor. 600 Soledad St., 210/207-2500.

San Antonio is known as Military City because there are four military bases within a 20-mile radius of downtown. Randolph Air Force Base and the Army's Fort Sam Houston are national historic landmarks and open to the public. The best view of Randolph's sprawling grounds is from the top of an ornate, white-turreted water tower called the Taj Mahal. Jets often scream overhead in formation. Fort Sam, meanwhile, is home to the Army Medical Department Museum, with exhibits on the evolution of military medicine from 1775 onward. Randolph AFB, 210/652-4410, randolph.af.mil, by appointment, free.Fort Sam Houston, 210/221-6358, ameddmuseumfoundation.org, free.

When musicians play on the Mariachi Stage in Market Square on weekends, singers are guaranteed to throw a few gritos. Somewhere between a yodel, a cry, and a laugh, the grito is an integral part of conjunto, a common type of music in Texas that mixes Mexican ranch songs with the oompa-oompa accordion of polka. 514 W. Commerce St., 210/207-8600, free.