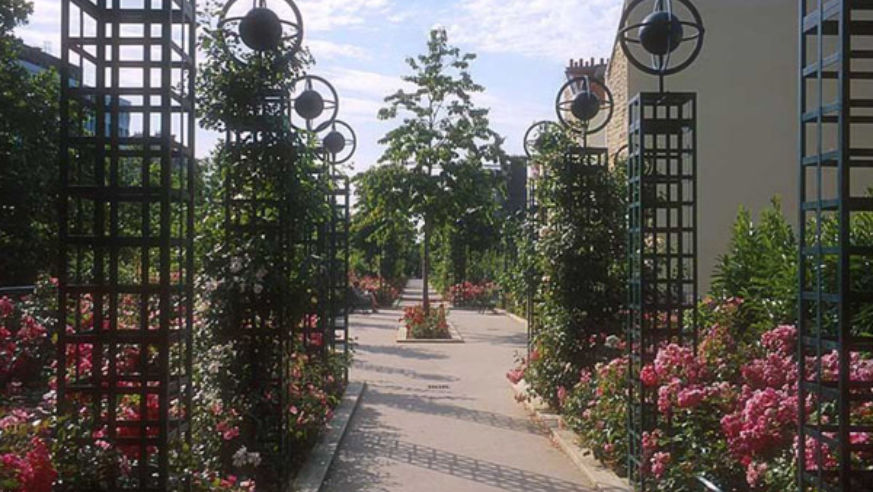 New Yorkers are looking forward to the June opening of the High Line Sky Park—a green space built atop an abandoned west side railway and the subject of a recent video series on the Sundance Channel. The inspiration for this most-cool of projects came from across the ocean, something called the Promenade Plantée.

The "planted path" of Paris winds in a southeasterly direction through the city's 12th arrondissement, from the Bastille to the edges of the Bois de Vincennes. An old industrial rail line that fell out of service in the late 1960s, it was a dead zone for decades before being reborn as a new kind of public park.

The first three miles of this landscaped path are elevated and feel blissfully removed from the rest of the city. At a height of several stories above the sidewalk, the Promenade's cherry trees, wisteria and rose bushes (mostly) block the sound of traffic down below. You won't find a lot of tourists here—just locals enjoying a quiet corner of their city. Its green benches are a magnet for Parisians who come to read, eat lunch, and kiss.

The brick arcades below this elevated portion have also been transformed into a series of galleries and workshops called the Viaduct des Arts. Stairs leading down to ground level allow you to peek (and drool) through the windows of these 45 studios. The Viaduc Café sits among these and is a nice place to stop for something to drink (43 avenue Daumesnil). If you're hungry, however, you're better off making a detour four blocks north and eating around the Marché d'Aligre.

The elevated portion dips to ground level around the Jardin de Reuilly, but the path continues on to the border of the Bois de Vincennes. A perfect summer day in my mind might start with a sack of pastries from the nearby Blé Sucre (7 rue Antoine Vollon), nibbled slowly while heading on foot along the Promenade Plantée to a free Paris Jazz Festival concert (insert link from Top Five Free in June) in the Bois de Vincennes. A whole day of sweetness for less than ten bucks… who says Paris is expensive?

[Note: The spelling of Viaduc has been corrected from the original version of this post.]

More on Affordable Paris, from our ex-pat blogger in Paris