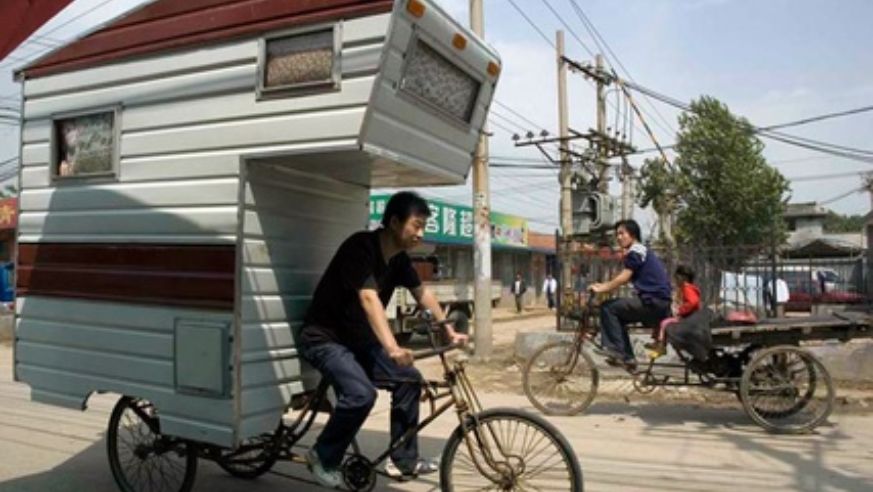 Courtesy Kevin Cyr
Wayne Wang, a friend of the artist, takes the camper bike out for its inaugural ride

As much as I love the idea of RVing, I've always been afraid of the fuel costs that would be involved on a cross-country (or, heck, cross-town) trip in one. Yes, some enterprising souls out there are retrofitting RVs to run on restaurant grease, and some other folks are even working on developing hybrid versions of new RVs, but this contraption, designed by Brooklyn-based artist Kevin Cyr, has them all beat.

It began as a two-dimensional work of art—the bulk of Cyr's works depict (or use as canvases) run-down buses, ice cream trucks, and hoopties of all sorts—but this one actually came to life, so to speak, in 2008, when Cyr constructed a prototype version of a functional bike-drawn camper in Beijing.

I'm not kidding myself that I'd actually have the gluteal power to haul one of these things down the street—and in fact, the artist hasn't taken the bike beyond Beijing's outskirts himself—but wouldn't it be cool if you could carry your lodging around with you like a snail or a hermit crab (and get a mean workout in the process)?

If you're into it too, you can check out more of Cyr's work online or at the Alden Gallery in Provincetown, Massachusetts; a new show opens August 21.