An Airline Gets Sued for Misleading Fees

Have you ever felt like airlines were just tacking on extra fees without rhyme or reason? In the case of at least of one airline, you might be right.

According to the Miami Herald, just this week, Spirit Airlines—which many of you know as the airline that charges for carry–ons—was hit with a class–action lawsuit by a Miami law firm for misleading passengers into thinking that extra fees were government charges. The fees, which range from $8.99 to $16.99 were tacked on to airfares regardless of how they were booked and were essentially just a tricky way for the airline to raise the cost of flights.

Spirit has denied the claims and will fight them in court.

Now my question is—is Spirit the only airline instituting this practice or will others be discovered now that folks will be watching pricing more carefully? Only time will tell.

But more importantly, how do you feel about this? Will you continue to fly Spirit if the court case comes back and proves that the charges are misleading?

10 Places You'd Rather Be on a Wednesday

An End to the Fight Over Deck Chairs?

Should Celebrities Be Able to See Museums Separately?

If you use online travel&ndash;booking tools, you’ve probably asked yourself once or twice, “Can I really trust these guys?” The answer, apparently, is in some cases “no.” The UK’s Office of Fair Trading, a consumer regulator, announced last week that it was going to take action against several online travel companies and hotel chains, most notably Expedia, Booking.com, and InterContinental, for price fixing. The online companies are accused of trying to prevent hotels from selling hotel rooms below certain price minimums by threatening to remove the hotels from their sites. The UK newspaper the Daily Telegraph reported that Expedia admitted it “engaged in cartel conduct on breach of the law” and is now cooperating with the investigation. The Telegraph notes that Expedia will likely receive leniency for cooperating, and may implicate other online travel companies and hotel chains in the scandal. Online tools have become such an integral part of our everyday travel research, we’re wondering if this alleged price fixing among some of the major players will have any affect on your online booking habits. Does this news change your likelihood of using Expedia or Booking.com in the future? &mdash;Robert Firpo&ndash;Cappiello MORE FROM BUDGET TRAVEL 8 Cool New Tools for Finding the Perfect Hotel 10 Most Useful Travel Websites The Ultimate Guide to Travel Apps 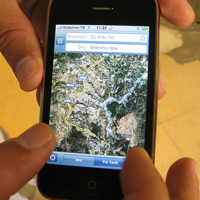 Back in June, Apple made an announcement that sent shock waves through the techie world and shivers down travelers' spines: When they launch their new iOS6 operating system, they'll officially dump Google Maps and replace it with their own mapping app. It's safe to say that a vast majority of travelers have become completely reliant on Google Maps, for everything from driving directions to public transportation to scoping out new neighborhoods with Street View. So what can you expect from the Apple replacement? Flyover: Google offers the undeniably cool Street View feature, which has even recently moved beyond city streets and into national parks. So how can Apple compete? The short answer is, so far, it can't. Their new Flyover feature allows users to explore 3&ndash;D renderings of a limited number of cities (the Apple campus in Cupertino, Chicago, Copenhagen, Las Vegas, Los Angeles, Miami, Montreal, Sacramento, San Francisco, Seattle, and Sydney) in zoomable high resolution. A cool feature to be sure, but it's not particularly useful. Siri: You know her, you love her, you can't get enough of her. Everyone's favorite robot will be fully integrated into Apple's map system. When you ask Siri about a place, you'll get turn&ndash;by&ndash;turn directions. Perfect for those times when you're too lazy to type in an address. Local Search: Tap on a business on the map and you'll be greeted with a box full of information like Yelp reviews, photos, phone numbers, and deals. if (WIDGETBOX) WIDGETBOX.renderWidget('1340f3d5-5a98-4d8e-b26c-6b99e4a5d2de'); Get the Poll Creator Pro widget and many other great free widgets at Widgetbox! Not seeing a widget? (More info)Do you trust Apple in the cartography department? Will the mapping app be as crisp, user&ndash;friendly, and progressive as the rest of their products? Or do you wish Google and Apple could just get along so you could have Google Maps back? MORE FROM BUDGET TRAVEL The Ultimate Guide to Travel Apps Little Known Travel Tricks With Google Maps Finding A Hotel Is As Easy As Pointing To A [Google] Map

Airline passengers have lots of complaints: lack of legroom, outrageous baggage fees, annoying seatmates. There are great things about flying, of course. There's the incredible view from 35,000 feet, plus the good chance that at the end of the flight you'll either be on vacation or home sweet home. But really, the most important thing to consider with air travel is safety. A new report from the Air Transport Rating Agency (ATRA) determined the 10 safest airlines, and the good news is they are probably all airlines you already fly. The Swiss organization, founded in 2011, determined the top ten safest airlines of 2012 to be (in alphabetical order) Air Canada, Air France/KLM, AMR Corporation (American Airlines and American Eagle), Delta Airlines, International Airlines Group (British Airways), Lufthansa, Qantas, Southwest Airlines, United&ndash;Continental Holdings, and US Airways. The Holistic Safety Rating studies are released on a yearly basis, and take a wide variety of factors into account to determine criteria that leads to a safety rating&mdash;how many passengers each plane holds, the number of employees and cabin crew, overall condition of aircraft in use by the airlines, the number of aircraft considered to be at risk, and the number of accidents over the last ten years, among other factors. MORE FROM BUDGET TRAVEL 11 Surprisingly Lovable Airlines The Breakdown on 8 Membership Programs 4 Most Common Reasons Airlines Lose Luggage

Americans traveling outside the US often find that their credit and debit cards don't work at many places, such as gas stations and ATMs. That's because most other countries have switched from magnetic stripe, signature-based cards to "chip-and-PIN" technology, which means that their cards come with a microprocessor chip that adds additional security. Last week, Bank of America began issuing credit cards with chips embedded in them, making them easy to use when traveling abroad. Not to worry: These cards still have the magnetic stripe and will be accepted as usual in the US. All new BankAmericard Travel Rewards, BankAmericard Privileges, Virgin Atlantic travel credit cards, and Merrill Lynch credit cards will now come with the travel-friendly technology. Customers who hold the following cards will be able to visit banking centers or call BofA to ask to receive replacement cards with the chip:: BankAmericard Cash Rewards, BankAmericard Power Rewards, BankAmericard, AAA Members Rewards, NEA, Asiana Airlines, Alaska Airlines, Hawaiian Airlines, Royal Caribbean and Norwegian Cruise Lines. Other banks will copy the move, as the production costs for the chips are dropping -- currently down to $3 a chip. Visa has told businesses they have until 2015 to switch to card-reading machines that accept chip-and-PIN cards. After that date, merchants will become liable for any fraud that may result from a fake signature. In related news, the new Citi Hilton HHonors Reserve has a chip. So does the Travelex Chip and Pin Card. MORE FROM BUDGET TRAVEL The Death of the Travelers' Check? (40 comments) The Breakdown on 8 Travel Loyalty Programs in 2012 Citibank and Chase Drop Foreign Exchange Fees on Some Cards