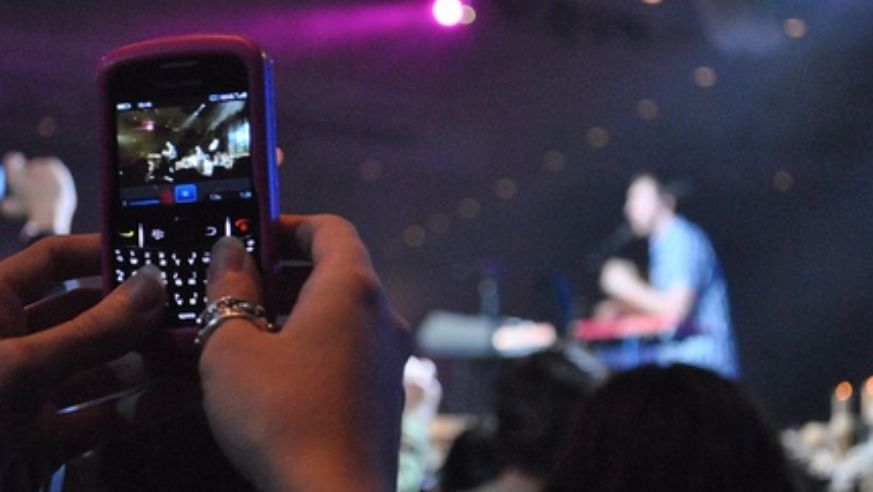 Courtesy jgoge/Flickr
If Apple gets its way, recording capabilities will be blocked on iPhones during concerts.

Have you ever noticed people at concerts using their smartphone cameras to capture the moment? (Admit it, you've probably done it, too.)

Now, a patent filed by Apple aims to use infrared sensor technology to prevent people from recording a performance or snapping a photo. According to a New York Times article, the patent applies to any mobile device made by Apple that has a built–in camera—that means any iPhones, iPads, or the iPod Touch.

Here's the plan in a nut shell: Rather than recording a video clip of your favorite artist's performance, sensors coming from the stage will temporarily block the camera's recording features. The idea is to maintain the artist's rights and prevent bootlegged performances from getting online. (Technically, the idea could also be extended to include Broadway shows and movie theaters if bootlegging is the real problem.)

Apple is also considering using the same infrared sensors to embed a watermark into any photos taken at such venues as museums, zoos or aquariums, not necessarily a bad thing if you're on vacation and can't remember where a photo was taken. Another idea regarding photography at museums uses sensors to deliver information about the painting or artwork you're interested in taking a picture of.

The patent was filed by Apple in 2009 and published by the United States Patent and Trademark Office on Thursday, June 2nd, 2011. An article by The Washington Post stresses the fact that this is just a patent filing, "which means it's far from certain that the company will actually use the technology at all."

I reached out to Apple to get their take on this topic and was told that they are unable to provide an official comment at this time.

Personally, I don't like the sound of this one at all. First of all, if I'm willing to spend my hard–earned money on a piece of fancy technology, don't I have the right to use it? It's not like the quality is up to par with media-level photography. Besides, what if I just want to take photos of my friends at the concerts? If I'm paying for a ticket to a concert, shouldn't I have the right to snap photos of my friends at the venue? Shouldn't I be able to share a clip of the evening with my friends via social media or email a quick picture of a beautiful statue without having a watermark in the way?

What do you think of this? Do you think Apple is on to something or is the company taking things too far?

iPads Take on Hotels, Airlines and the Eiffel Tower