It'd be easy to breeze through Barnard--before you know it, you've passed right by the general store and post office and left town limits. But it's worth stopping awhile. Barnard, just northwest of White River Junction in central Vermont, has a remarkably rich food scene.

Will Dodson, a San Francisco-based chef, took over the Barnard Inn Restaurant in 2000. "Sonoma and Napa Valley were way out of my price range," says Dodson. A family member found the Inn listed in The New York Times. "I came out, toured the area, and fell in love with it," says Dodson. "If you were stalled on the side of the road, the first person passing by would stop." The chef, his wife Corinne and their blended family now run the restaurant with a small staff. 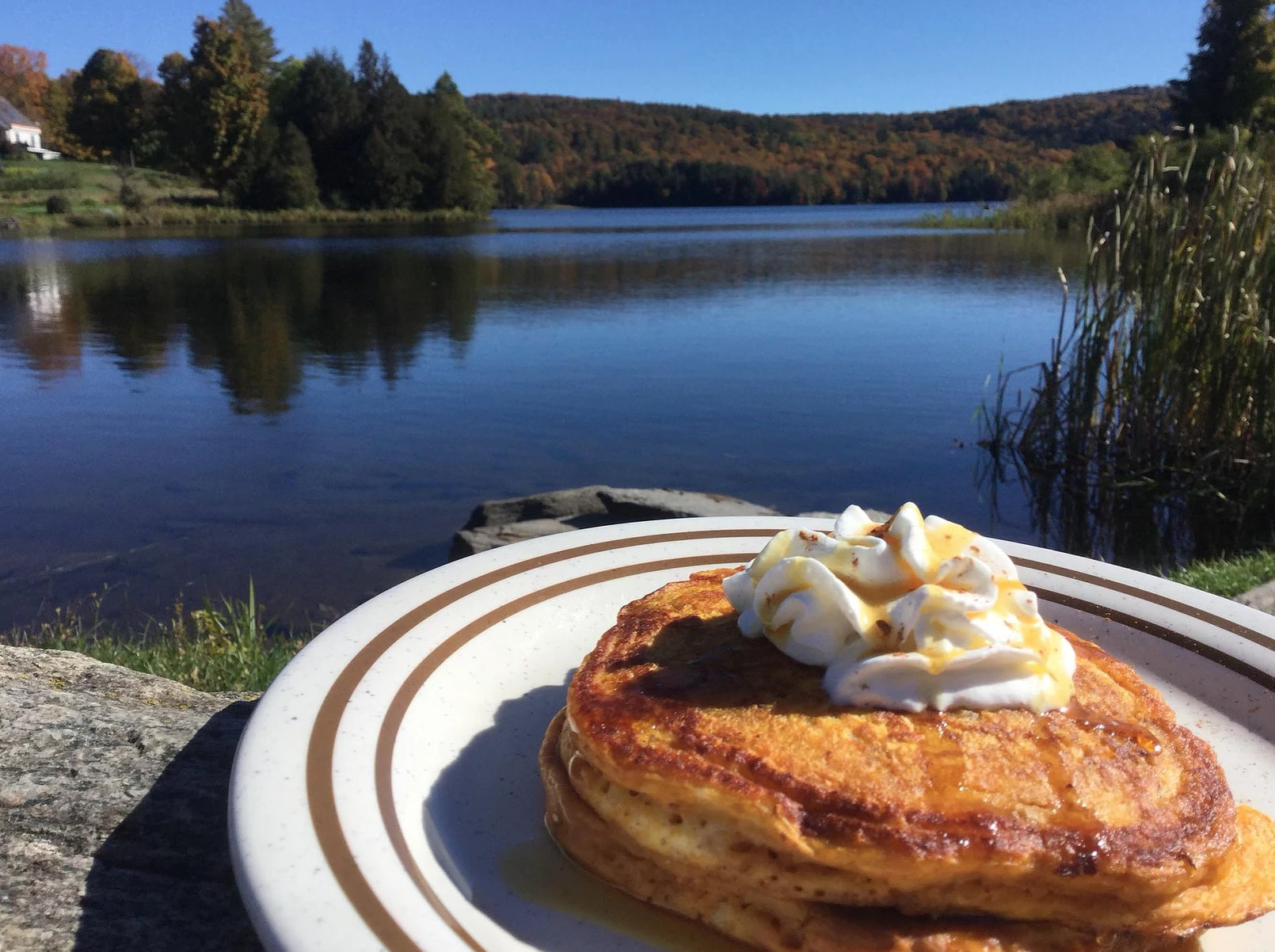 The 19th-century Barnard General Store is owned by the Barnard Community Trust, the non-profit that was formed in order to "Restore the Store" when it went out of business in 2012. The store is not only the place to pick up groceries, but also serves breakfast and lunch. On the weekends order one of their famous pancakes such as mint chocolate chip, lemon blueberry or banana caramel.  The General Store is also the go-to spot for a cup of coffee any day of the week and watch the sunrise across the street at the lakefront park.

The Fan House Bed and Breakfast is run by Sara Widness who comes to inn keeping after a career in international public relations. With working with so many clients Sara has perfected her art of delivering the finest in service and accommodation.  Enjoy the surrounding beauty of nature while enjoying the luxury of this B&B.  Fan House has several suites/bedrooms available each with their own bathroom.  Nightly rates begin at $185 but increase during the fall foliage season mid September to late October.

For more information and things to do visit the Community of Barnard site.

Southern U.S.: 'We're Moving to L.A. to Follow Our Dreams'

Gross National Product's Scandal Tours Members of the comedy troupe GNP expose the Capitol's seamier side by regaling tour-goers with cheeky, costumed impersonations and sordid tales of politicians from George Washington to George W. Bush. First on the bus route is the Watergate Hotel, naturally, followed by the Kennedy Center (a easy segue to extramarital affairs and conspiracy theories), the Vista International Hotel where former D.C. mayor Marion Barry was arrested on drug charges, the Willard Hotel where Ulysses S. Grant dubbed those pestering him in the lobby "lobbyists", and more sights that are prime fodder for poking bi-partisan fun. "There's a constant supply of new material," quips GNP member John Simmons. Gross National Product, 202/783-7212, gnpcomedy.com/scandaltours; $30, $20 for students and seniors; reservations required; Saturdays at 1 P.M. Hurricane Katrina: America's Worst Catastrophe; City Disaster Tour In the wake of Hurricane Katrina, tourism-starved New Orleans has spawned two narrated bus tours of its ravaged neighborhoods and the uncomfortable concept of disaster tourism. The operators, Gray Line New Orleans and Tours by Isabelle, were driven largely by the need to revive their businesses and to inform visitors. The three-hour Gray Line tour passes a breached levee, the Superdome, Canal Street, the New Orleans Convention Center and the Lakeview area, where the company's vice president Greg Hoffman and many others lost homes. Isabelle Cossart's "City Disaster Tour" is slightly longer and more expensive. It begins in the French Quarter, and covers many of the same sights along with the badly hit St. Bernard and New Orleans East districts. Both highlight the area's history and development, and offer personal takes on the hurricane's timeline. (Passsengers are not allowed to exit the Gray Line motorcoach during the tour, and photography is discouraged.) Gray Line New Orleans, 800/535-7786, graylineneworleans.com; $35, children 6-12 years of age, $28; $3 donated to one of five local non-profit organizations; 9 A.M. and 1 P.M. daily. Tours by Isabelle, 877/665-8687, toursbyisabelle.com; $49 per person; 8:30 A.M. and 1 P.M. daily, provided there are at least four passengers Lifestyles of Houston's Rich and Infamous: The Enron Tour Yankee Sandra Lord has been leading tours of her adopted Houston since 1988, and the latest riffs on its greatest homegrown scandal: the rise and meteoric fall of Enron. While founder Kenneth Lay and chief executive Jeffrey Skilling pass the time on trial for fraud at a local courthouse, the curious can hop a bus for a five-hour, lighthearted look at offices, churches, restaurants, and jails they and other employees have frequented. Lord weaves together facts, anecdotes, biographical information, and historical precedent—a view of the 1928 Kirby Mansion calls for a quick lesson on Houston's first tycoon, John Henry Kirby, an oil man who went down in a high-profile bankruptcy. Discover Houston Tours, 713/222-9255, discoverhoustontours.com ; $30; public tours in Mar.-Apr. 2006, ongoing private tours available Surveillance Camera Walking Tours Each of the Surveillance Camera Players' walks begins with a general introduction on the workings and evolution of surveillance cameras, and then zeroes in to identify numerous often-discreet cameras in a single Manhattan neighborhood—some have close to 400! Far from spouting a left-wing screed, the Players present their findings and encourage healthy debate over the pros and cons of our increasingly public lives. Take a peek at their hand-scrawled online maps of cameras in Times Square and other neighborhoods. Surveillance Camera Players, 212/561-0106, notbored.org; free; Sundays at 2 P.M.