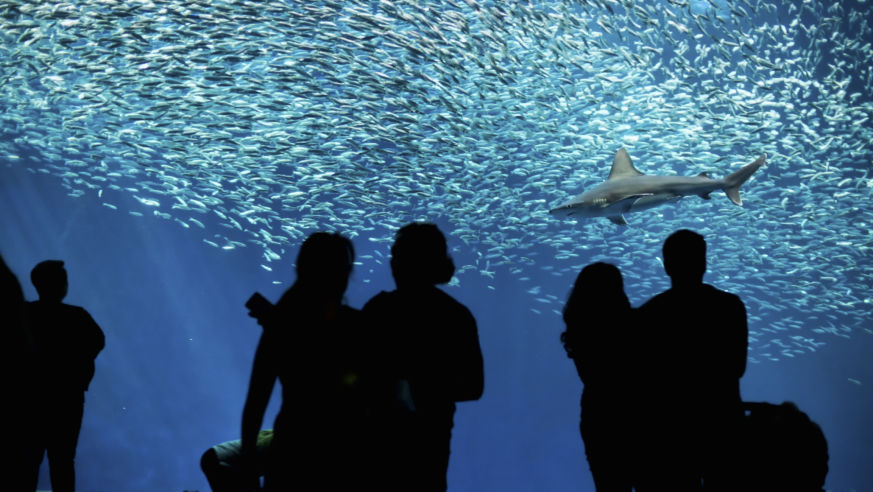 The Monterey Bay Aquarium, on California's central coast, is a truly immersive experience.

A dazzling array of sea life awaits at these awesome, family-friendly attractions.

For many of us, aquariums offer our very first glimpse of what life looks like under the sea. Our oceans and fresh water bodies are teeming with marine life—a dazzling array of animals, plants, and organisms that shape our world, and a visit to an aquarium can be the first step in teaching children how to care for their planet.

There’s no shortage of aquariums, though. According to the MarineBio Conservation Society, there are more than 200 marine aquariums and ocean life centers around the world.

Need some help narrowing down your options? These 10 are Budget Travel’s list of the best aquariums across the globe.

The largest aquarium in the U.S. has tens of thousands of animals swimming in over 10 million gallons of water. Located in Atlanta, the massive institution is home to some of the biggest fish in the world. Daredevils can even swim with the aquarium’s whale sharks. For kids, there’s a petting area where you dip your hands into a shallow pool filled with rays and baby sharks, including Bonnethead sharks, which have eyes in the back of their heads. Don’t miss the museum’s dolphin show, where trainers showcase the beauty, athleticism, and intelligence of bottlenose dolphins.

Want to explore the largest aquarium in the world? This aquarium in the People’s Republic of China boasts eight themed areas inside the park, each representing a different part of the ocean. Chimelong’s whale shark exhibit offers stunning views of one of the largest creatures in the world through its massive viewing window. The aquarium also has a dolphin’s island, otter’s den, and sea lions theater, where the animals show off acrobatic movements to the beat of tango, rock, and Brazilian samba music.

This Singapore aquarium is home to more than 100,000 marine animals of over 1,000 species from across 50 different habitats. The museum’s shark encounter lets guests swim inches away from some of the ocean's stealthiest predators, such as the hammerhead, silvertip and sandbar sharks. Visitors can also meet face to face with Indo-Pacific bottlenose dolphins. When you’re done gawking at the sea life, check out the high-speed water slides and lazy river at Adventure Cove Waterpark, which is located next to the aquarium.

One of the world’s second-largest shopping mall is also home to an aquarium with more than 33,000 aquatic animals and the largest collection of sand tiger sharks. Rising to the mall’s third floor, the museum is famous for its 48-meter tunnel, where people can watch the museum’s divers feed sharks and rays throughout the day. For a closer encounter, the aquarium offers a 30-minute tour of the museum’s back-of-house facilities, where you can feed shark babies and learn about the center’s shark breeding program.

Opened in 1930, Chicago’s Shedd Aquarium is one of the oldest aquariums in the world. Home to sea otters, lake sturgeons, giant river turtles, blacktip reef sharks, and other water animals, the museum specializes in providing learning experiences for visitors of all ages. Take advantage of the free audio guide, which provides detailed accounts of the aquarium’s most memorable species, including the incredible rescue story of green sea turtle Nickel. Penguin lovers can meet, touch, and feed Magellanic penguins while learning about penguin anatomy, nesting season, and the museum’s penguin conservation work in South Africa.

Located in the avant-garde architectural complex of Ciutat de les Arts i les Ciències in Valencia, the Oceanogràfic aquarium offers a truly immersive experience. It has Europe’s longest underwater tunnel, where visitors get a front-seat view of more than 100 sharks of 21 different species. In addition, the aquarium features stunning sea life from the Mediterranean ocean, including barracudas, snakelocks anemones, and spiny lobsters. It also offers nighttime attractions, including live music and dolphin shows.

This Lisbon aquarium showcases four marine habitats crossing the temperate, tropical, and cold waters of the different oceans of the planet. The museum’s permanent exhibition features a stunning array of jellyfish, rich algae, penguins, and amphibians such as dusky salamanders, European tree frogs, and rubber eel. Kids can enjoy an overnight stay at the museum where they learn more about sharks.

Another stateside aquarium well worth visiting is Monterey Bay’s. The museum’s ocean-view decks are a great vantage point for viewing local wildlife, from sea otters and seals to humpback whales and white sharks, which gather to feed in the bay after spending months offshore in waters as far west as Hawaii. Daily shows include sea otter feeding, penguin feeding, seabirds feeding, and “Luna: A Sea Otter's Story,” where guests learn about the threats facing California's sea otter population by following one sea otter’s journey.

Opened in 1956, Canada’s largest aquarium houses around 300 species of fish, nearly 30,000 invertebrates, and more than 50 species of amphibians and reptiles. The museum offers a number of full-sensory experiences, including sea lion training, otter feedings, dolphin shows, and walrus encounters. It’s also the headquarters of Ocean Wise, a non-profit where scientists, educators, and conservation experts spearhead initiatives such as shore cleanup efforts and sustainable seafood practices.

Dedicated to promoting the environmental conservation and rehabilitation of wildlife from the Gulf of Mexico, this Corpus Christi, TX aquarium offers a unique look at the animals that populate the rich habitats of this region. Kids will especially enjoy the museum’s slot meet-and-greet experience, where guests get a personal introduction to Xena or Chico, one of the Linneaus’s two-toed sloths. The aquarium’s wildlife rescue center helps rehabilitate marine mammals, sea turtles, raptors, and shorebirds who are injured in the wild.