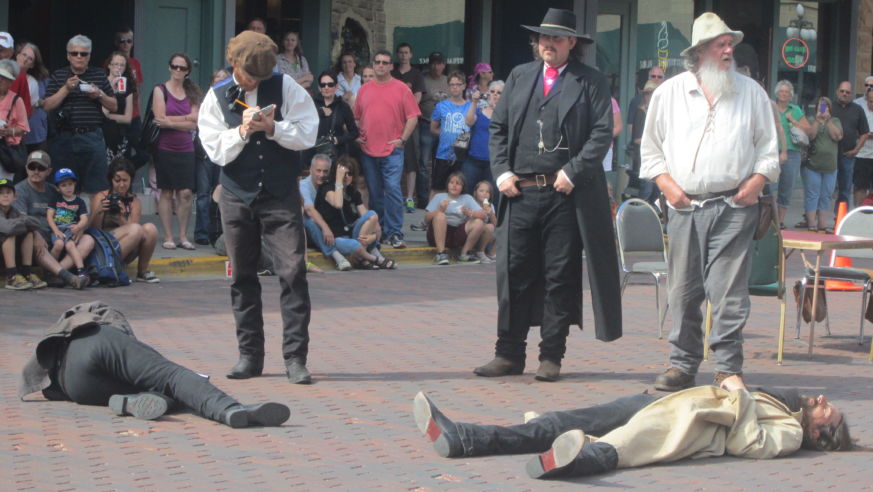 You can watch a free shootout re-enactment in the streets of historic Deadwood as you wait for the Alkali Ike Tour.

Whether you're looking for a fun day-trip to a famed amusement park, an hour-long joyride through the legendary Wild West, or a behind-the-scenes look at the city featured in AMC's hit show Breaking Bad, we've rounded up several bus tours around the country where you can get to know a new place without breaking the bank.

It's called the Big Apple for a reason, and one way to take in all the major sites in a small amount of time is to tour parts of the city by bus. Both CitySights NY and Gray Line New York offer a wide variety of sightseeing tours depending on which neighborhoods are highest on your list—check their websites to view touring options that include packages to Broadway shows, day trips to locations outside the city, and in-depth tours of the Bronx and Brooklyn. Their special deal this summer involves more than $75 in savings and a chance to embrace your inner child with a day-trip to Luna Park in Coney Island, Brooklyn. Valid now thru Oct. 1st, the package includes transportation to and from Manhattan, four hours of unlimited amusement park rides, a ride on the legendary Cyclone Roller Coaster (guests must be taller than 54 inches), a Nathan's Famous hot dog with a 16 oz. drink, a souvenir hat, a $10 card to use for the arcade and games, and a complimentary pass for access to the beach and boardwalk. The Luna Park package costs from $59 for adults and from $39 for children ages 3-11. Please visit the websites for CitySights NY or Gray Line New York to book this deal and to view pick-up and drop-off locations. Book ahead of time online or arrive at least 15 minutes early to grab a spot on this limited-edition tour.

Meet the legends of the Wild West in Deadwood, South Dakota

If you want to feel like you've just stepped into an old Wild West film, definitely visit the historic town of Deadwood, a magical place where crowds gather in the streets several times a day to watch historical re-enactments of street-dueling gun-fighting shootouts that took place more than 100 years ago—you can even catch a re-enactment of the shooting of Wild Bill Hickok every night at the #10 Saloon, followed by The Trial of Jack McCall, the man who shot him. For a closer look at 19th-century Deadwood, reserve a ride on Alkali Ike Tours, an hour-long narrated bus tour through the historic town and adjoining neighborhoods. The tour even includes a visit up the hill to Mt. Moriah Cemetery where you can learn about the town's most famous inhabitants—Preacher Smith, Seth Bullock, and Potato Creek Johnny among others—and pay a visit to the gravesites of Wild Bill Hickok and Calamity Jane, two legendary (and real) characters who lived and died in Deadwood. Tickets cost $9 for adults and $5 for children ages 6-16. Children under age six get in free. Ask about special discounts for Veterans, seniors over age 60, and those visiting from outside the U.S. Call 1-866-601-5103 to book ahead of time as tours can fill up quickly during the busy summer months. Tours leave Monday thru Thursday and Saturdays at 12:15 p.m., 2:15 p.m., and 4:30 p.m.; Sundays at 2:15 p.m. and 4:30 p.m. from Main Street in front of the #10 Saloon.

If you're lucky enough to be anywhere near Albuquerque, N.M., where nearly the entire series has been filmed, catch a ride on The BaD Tour by the Albuquerque Trolley Company, a 3.5 hour open-air joyride that covers 38 miles and 13 main locations from the show including the exteriors of Walter White, Jesse Pinkman, and Gus's houses, the car wash and laundry facilities that act as the meth-maker's storefronts, Tuco's headquarters, the ever-shady Crossroads Motel, and the infamous railroad tracks. To top it all off, you'll get a complimentary drink during a stop at Twisters Grill, the restaurant that doubles as Los Pollos Hermanos on the show. Tickets cost $65 per person including taxes and leave from 208 San Felipe St. NW in Albuquerque's Historic Old Town. Check website for available dates and to purchase tickets online. Please note that the tour is rated 'R' because of the show's dark subject matter and may not be appropriate for children. If you're short on time or if tickets happen to sell out due to the tour's popularity, the Albuquerque Trolley Company also offers an 85-minute long Best of ABQ City Tour, featuring a peek at several major sites from the show like Jesse Pinkman's house and Hank's DEA office during a fun trip through Historic Old Town, Museum Row, Nob Hill, the University of New Mexico, the historic Barelas neighborhood, and along Historic Route 66. Tickets cost $25 for adults, $23 for students and seniors over age 65, and $12 for children under age 12. Tours leave from 208 San Felipe St. NW in Albuquerque's Historic Old Town.

We want to know: have you ever taken a themed-bus trip in a new place? Tell us about it below!