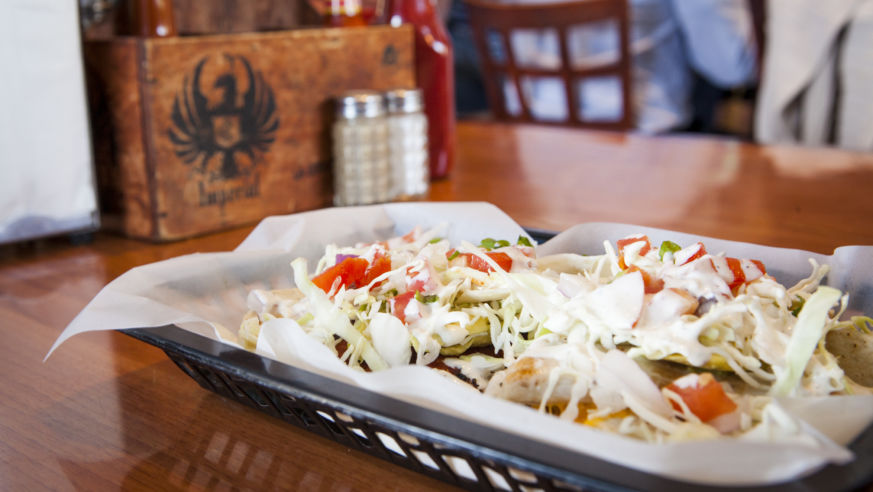 Got five bucks? That buys lunch at Blue Water Seafood Market & Grill. These mahi mahi tacos backed up their reputation as best fish tacos in the world.

Daybreak at San Diego's Sunset Cliffs Natural Park came dressed in a mellow haze of light fog—peaceful weather ideal for yoga at dawn. One young bearded man brought a bright red mat and meditated right on the rocks, a flock of gulls swirling in the background, palm trees dotting the horizon. Mindfulness aside, time waits for no woman, and Whitney was soon back on the road, on Route 5, in search of a dish true to the area. A local truck driver's recommendation? Blue Water Seafood Market & Grill, a blue-ceilinged fish shack where daylight pours in through the windows and photos of fishermen clutching prize-winning marlins cover the walls like a collage. She'd heard tell that Blue Water had the best fish tacos in the world. And the kicker is...they were. Less than five bucks bought Whitney a hearty mahi mahi taco (there are more than a dozen kinds of fish to choose from) and a fresh-outta-the-sea flavor she might spend her whole life trying to find again.

Turning onto I-8, Whitney traced the Mexican border, weaving close to it, then skirting away when the highway leaned north. The diversity of the landscape was striking: Coming from the coast, the ocean vistas quickly twisted into a mountainous desert landscape, which in turn transformed into hills seemingly made of tiny pebbles. The roadside flatlined into deserts, followed by fields. When Whitney was just shy of Yuma, Arizona, the almost Moroccan-looking Algodones Dunes came into view, the sand's curves resembling perfectly whipped chocolate meringue, the peaks folding into valleys again and again.

Ten miles west of Yuma, Whitney motored to Felicity, California, dubbed the Center of the World, a nearly deserted desert wonder first visible from far away—a tiny church on top of the highest sand dune. Once you're there, you can't miss the pyramid that holds the "official" center-of-the-world plaque, the sun dial featuring a bronze replica of God's arm from the Sistine Chapel, an original spiral staircase from the Eiffel Tower...or, when Whitney was there, the guy who had placed a fake skeleton in a lawn chair next to his truck, which we hope was a joke rather than an invitation. To see all four incongrous things in one strange place was disorienting. When you have a feeling like that, Whitney says, you know you're officially a road tripper.

Whitney's Travel Tip: Lines for Blue Water Seafood Market & Grill can wrap around the corner. But a young San Diegan on his lunch break gave Whitney a tip only a local would know: There's a little side window at the restaurant designated for takeout. Ordering there won't get you your food any faster, but when lines are long, stop at the window first for a beer, then drink it while you wait in the queue.

Next stop: The rest of the west.