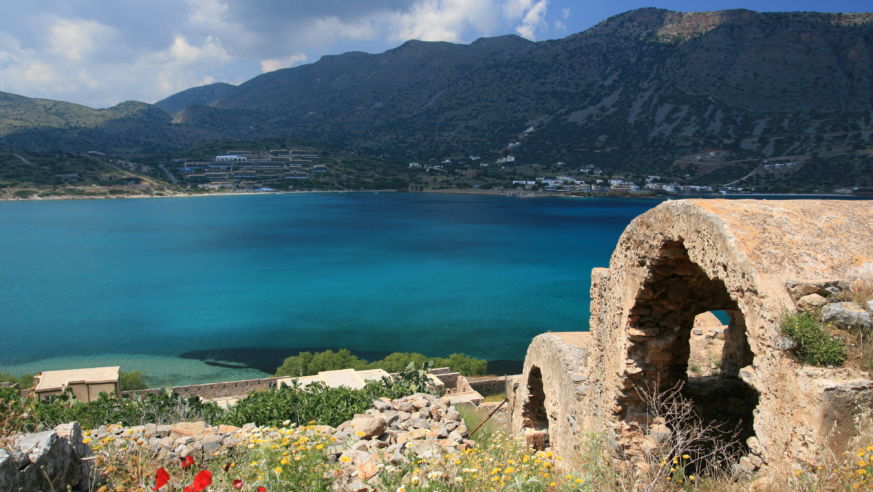 Enjoy views of Elounda from Spinalonga Island the next time you visit Crete.

This article was written by Sasha Heseltine on behalf of Viator.com.

Famous as the cradle of civilization in the eastern Mediterranean, Crete was settled 9,000 years ago by the Minoans—today, the island is scattered with ancient ruins, dramatic mountain scenery, and numerous sandy beaches. Here's my list of ten of the most beautiful places on the Greek Island of Crete.

Heraklion Ramparts
The mighty 13th-century Venetian ramparts that wrap around the old harbor in Heraklion give the best views of the short but fortified Koules Fortress as it stands over the harbor mouth. Closer inspection of this formidable edifice reveals a Lion of St. Mark carved into the stonework above the main gateway; this motif for Venetian power can be seen all over northern Italy and the eastern Mediterranean.

Chania Old Town
Chania is Crete’s prettiest town and has an ancient heart crammed with synagogues, mosques, and churches, plus charming buildings of Turkish and Venetian origin clustered around the harbor promenade. Artsy boutiques, bars, and tavernas line the waterfront alongside the domes of the Mosque of Hassan Pasha and the Venetian Great Arsenal.

Knossos
The Minoan site of Knossos showcases the remains of the world’s earliest sophisticated civilization, a city that flourished for thousands of years as the biggest trading power in the eastern Mediterranean. The Neolithic and Bronze Age site is the most impressive on Crete, despite some of the villas and sections of King Minos’s gigantic palace, originally built around 2,000 B.C.,having been rather haphazardly redecorated in the early 2000s.

Malia
The Minoan remains at Malia may not be as well known as Knossos, but they will almost certainly be quieter despite the party-reputation of the adjacent town. There’s plenty to explore, including the knee-high remains of a vast palace complex and imposing pillared villas, some with luxurious bathing halls, all nestled into olive groves although the sea views have been spoiled in places by the protective carapace placed over the complex.

Samaria Gorge
Starting from Omalos, the legendary Samaria hike in the White Mountains wends through a narrow, rocky gorge for 11 miles (18 km) before ending at Aghia Roumeli. From there, little ferries take hikers to the village of Chora Sfakion, where buses and taxis connect with Heraklion and Chania. Samaria Gorge is only open in the summer but gives walkers the chance to see wild goats, carpets of wild herbs, and birds of prey playing in the thermals.

Loutro
The cute coastal village of Loutro can only be reached only by boat or on foot; it has remained a delightful and traditional white village and spending the day there is like experiencing time travel. It’s Crete’s biggest secret with nothing much to do but swim, enjoy a lazy lunch at a taverna, and watch the ferries, which run several times a day from Hora Sfakion.

Arkadi Monastery
The golden-stoned monastery church at Arkadi near Rethymnon is beautiful to look at with its Venetian carvings and exotic bell tower—it also tells a story symbolic of Crete’s struggle for independence. In 1866, more than 1,000 people took refuge here during the island’s rebellion against Turkish occupation. When the Turks stormed the monastery, its gunpowder stores were ignited and hundreds of the refugees were killed. Those who escaped the explosion were massacred by the Turks; a memorial marks the spot where they died.

Panagia Kera
Seemingly stuck together from a miss-match of tiny round chapels and three triangular gables, the interior of this little Byzantine church above Meseleri is entrancing for its mass of faded frescoes. Inland from Agia Nikolaos, it also has far-reaching views over Mirabello Bay on the north-east coast.

Spinalonga
The arid islet ofSpinalonga was a leper colony until 1957, immortalized in Victoria Hislop’s book The Island. Today it’s uninhabited but can be visited by a short boat hop from Elounda. Spinalonga’s deserted streets, old stone dwellings, fortifications, and cemetery all have a brooding, tragic beauty as they slip slowly into dereliction.

Matala Beach
One of Crete’s most famous beaches, Matala, hit the big time in the 1970s when mobs of dazed hippies descended on the island from all over Europe. Still popular but no longer quite so bohemian, the sandy beach has a backdrop of honeycomb-colored cliffs pockmarked with caves and a laid-back village with plenty of low-key tavernas serving seafood. Catch the sunset right over the islet in the middle of the bay.