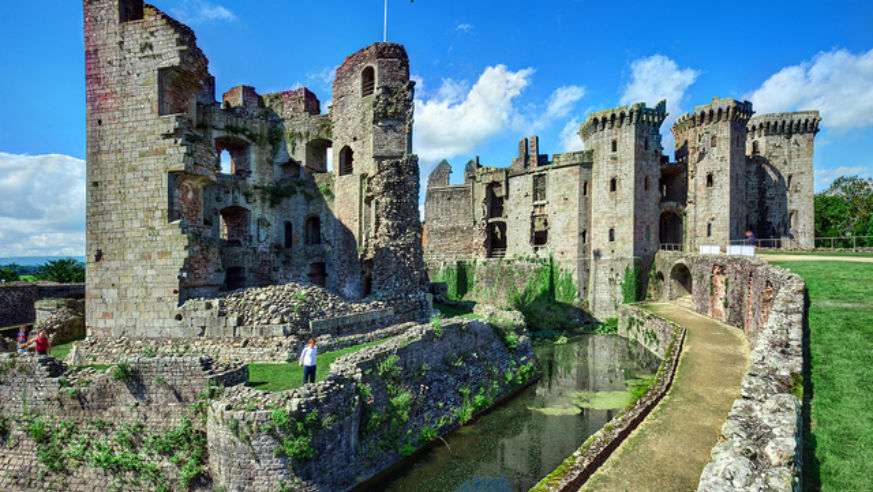 Visit Raglan Castle in Wales after a trip to the Raglan Arms pub.

This article was written by Zeneba Bowers and Matt Walker and originally appeared on their blog, littleroadseurope.com.

If someone asked you to think about great cuisine and traditional culinary culture, which foods would you think of first? Italian, French, Vietnamese, Indian? Many come to mind. We're here to offer an unexpected alternative: Welsh. Specifically, South Wales. It is a magical country with sweeping farmlands, forested hills, and beautiful rocky coastlines. Everywhere the countryside is covered with crop fields, or dotted with flocks of sheep and dairy cows. With so many farms of all types of production, it is easy to eat fare that is fresh, local, organic and delicious. And in recent years there has been a surge in Welsh gastro-pub culture, as more and more diners crave a food experience that is seasonal, locally sourced, and memorable. Here's our list of seven fine pubs in south Wales, plus, we've paired each with a nearby site of scenic or historic interest.

In tiny Monknash you'll find the award-winning pub The Plough and Harrow. For centuries the town was a farm managed by the monks of the Cistercian abbey at Neath. The Plough, with its Tudor doors, beamed ceilings, and open log fires, is reputedly haunted with good reason: centuries ago one part of the room (now the dartboard wall) was reportedly used to house shipwrecked bodies. Today it's an excellent pub, with many unusual local hard ciders and ales on tap, a new menu every day, open log fires, and delicious handmade food. Don't miss the sticky toffee pudding.

Nearby is the quaint market town of Cowbridge, which has the highest concentration of independent boutiques and stores in South Wales. Just outside Cowbridge you'll find a sign for the Old Beaupre Castle and a small turnoff. The castle is reachable only by foot through a few fields following the River Thaw. Beaupre was built in medieval times, around 1300, but renovated considerably in the 16th century. It was at this latter time that a Renaissance porch was added, the only one of its kind in Wales. It's more of a mansion than a castle and entry is free.

Pwllgwaelod (best of luck pronouncing that!) consists of two buildings: The Old Sailor's Pub, and a house next door. The pub is just steps away from a gorgeous sand beach flanked by cliffs, which make for a great walk either before or after lunch. The building was a makeshift lighthouse before it was a pub and has stood here for more than 500 years. Local lore says Dylan Thomas visited here as well. Food is not fancy here, just local and fresh.

Nearby you'll find the Melin Tregwynt Mill, in the tiny town of Castlemorris. Powered by a nameless but mighty stream flowing from the hills, this mill has been in operation since the 1700s and one of its old, giant waterwheels is on display in the main building. This was historically a very important place for the region, being where the local farmers would bring their fleece to be spun into wool yarn. Today the operation makes its own woven cloth as well as selling its yarn—the shop here sells many knit and weave items made from their product, most notably their cozy Welsh wool blankets.

This excellent gastro-pub is set deep in the countryside in the tiny hamlet of Pumsaint. The owners used to live in Bristol, but decided to move to Pumsaint to refocus their energy on the quiet life, focusing on great Welsh beer, cider, and food in the countryside. It's been a rousing success, by our assessment. Everything is made in house including the bread. In the corner of the dining room you'll find the 'shop,' a wooden cabinet filled with housemade pickles, jams, jellies, and chutneys, all available for purchase.

Just up the road you'll find the Five Saints Stone, which may be an ancient burial site; the legend goes that a sorcerer attacked five men, resulting in their heads leaving dents in this rock. Perhaps slightly more likely is that it was a stone used by the Romans in the mining process nearby. The day we visited, the family that lives in the house across the street happened to come home while we were there. We asked if they often had visitors, and they said yes, especially around pagan holidays. They said they like to set up lawn chairs to watch the action, stating it was "better than the telly."

Nearby you'll find the beautiful ruins of Talley Abbey, the site of a cautionary tale about two rival sects of monks. Established in the late 12th century by a Premonstratensian sect, the abbey was at first quite prosperous, but its success drew the attention of some local Cistercian monks who tried to take over the property by means of the legal courts. After nine years of lawsuits, the Premonstratensians prevailed, but all the litigation left them broke. Today it is a peaceful ruin set in the idyllic Welsh countryside.

The Plough in Rhosmaen is a very popular restaurant in the area, and serves high quality seasonal food. It's also a very nice hotel. Make sure you have a reservation on weekend nights as this is a popular place to go for a special meal or a fancy evening out. Service is fairly formal: expect one person to take your order, another to serve wine, another to deliver food, and others to clear plates.

Nearby you'll find the ruins of Carreg Cennen Castle, built in the 13th century on a remote rocky crag overlooking a wide expanse of farmland and wilderness south of Llandeilo. Though it was an effective stronghold due to its location and surrounding cliffs, the castle was deliberately demolished in 1462 to prevent it from becoming a haven for bandits. Today, instead, it's a haven for longhorn cattle, excellent birdwatching, and incredible views.

This excellent, award-winning gastro-pub sources local foods and puts a new spin on traditional Welsh dishes. The atmosphere is upscale and clubby, and the food was local, handmade, and presented in high style. Most dishes are served on slabs of local slate.

Nearby you'll find Raglan Castle, one of the most impressive castle ruins in eastern Wales. Built in the mid-1430s, it was a strategic hilltop fortification, surrounded at the time by game forest and farmlands. Its most noticeable feature greets visitors as soon as they arrive: hexagonal towers, including two over the main gate and one large guard tower surrounded by a moat. Cross-shaped arrow slits adorn the sides of the towers. The castle was not just a military outpost but also a lord's manor; the rooms include a great dining hall and extensive kitchen facilities as well as various residence spaces. Different coats-of-arms can be seen throughout the castle, carved into the stone walls and archways, the last marks of ancient and powerful families that once called this castle home.

Y Polyn is a happy surprise in the middle of rural South Wales and is a destination gastro-pub for diners from all over the area. The atmosphere is clean, cozy and modern, but still relaxed. Nearly everything is made in house, including the bread. Food is of the highest quality and very beautifully presented, and all locally sourced. Situated deep in the countryside, the gorgeous drive to the pub is an experience in itself.

Though Ludlow is now in England, we include it in this list because of its history of being part of the Welsh marches and its proximity to Wales. The Charlton Arms, an excellent pub and hotel, is located by the ancient Ludford Bridge in the market castle town of Ludlow. The chef likes to experiment with different spices and flavors, so though the menu has many traditional options it also has more modern ones like a Sesame Chili Beef Salad. The food, while it is very traditional pub food, is also made with seasonal ingredients and local produce when possible. In winter there's an open log fire, and the pub boasts beautiful views of the river and town.

Ludlow town grew up around its castle, one of a series of fortifications on the Welsh Marches—that area forming the historical border between England and Wales. The castle and supporting walled town were finished by 1233, and served as an excellent point of defense for centuries. In 1501 Prince Arthur honeymooned here—and soon thereafter died here—after his marriage to Queen Catherine of Aragon. (Arthur's older brother later married Arthur's widow and eventually became King Henry VIII.)

Established during the same time period as the castle, the parish church dominates Ludlow in some ways more than the castle does. Healthy visitors can buy a ticket to climb the 200 winding spiral steps to the top to survey the countryside and look down upon the tourists clustered on the castle tower across town.