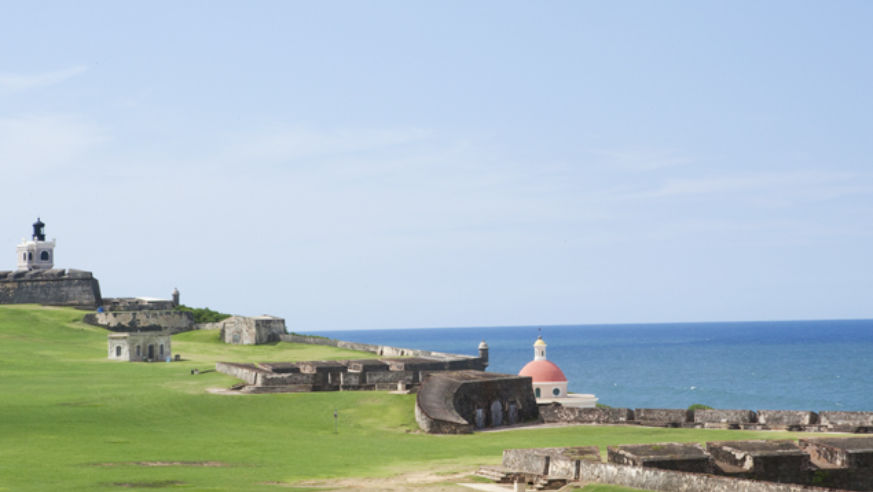 Puerto Rico's rugged 167-mile "scenic route" leads to waterfalls, coffee plantations—and a wild side of the island you won't find at just any old resort.

I'd already stopped to ask the old man for directions twice when he decided to take matters into his own hands. We were in the tiny Puerto Rican town of Castañer, where horses seemed to outnumber people, and I'd spent the past 15 minutes driving around in confused circles. Eventually the old señor took pity on me and climbed into his beat-up Toyota pickup to guide me. "Up there," he said in Spanish, smiling through missing teeth. And after that? He smiled again and angled his arm upward. Sube, sube, sube—climb, climb, climb.

Such is life on La Ruta Panorámica—literally, "the scenic route." The 167-mile byway is Puerto Rico's answer to Route 66: a capillary-like network of back roads spanning the island. Often only a single lane wide, with white-knuckle curves and the kind of minimal signage that makes getting lost a near certainty, it's not for travelers in a hurry. But for anyone with the time and inclination to wander a bit, the Ruta offers an irresistible window into the island's agrarian past.

This is the Puerto Rico you won't find at your classic coastal resort: wild horses trotting along the road, Cliffside barras selling $2 pork sandwiches and 93 cent cans of Medalla beer, nary a Starbucks in sight. To spend a few days puttering along the Ruta, winding from the coffee plantations of the central highlands to the sugarcane fields of the south, is to glimpse an older, quieter Puerto Rico—and all its beauty, frustrations, and charms.

23 INSPIRING PHOTOS FROM THE TRIP

55 MILES
If you can fly into San Juan, you can access the Ruta at its eastern end, in nearby Maunabo, or you can fly into Rincón and begin, as I did, at its western terminus in Mayagúez. It was a bustling Tuesday, hot and full of traffic, but within 15 minutes I was high in the hills, where it was 10 degrees cooler and the only sound was the wind rustling trees. This was the start of the Cordillera Central. Topographically, Puerto Rico is shaped like a stegosaurus and the Cordillera is the plates running along its spine. The going is slow: Speed limits top out around 35 miles per hour, and the switchbacks require constant attention. You know how kids pretend to drive, yanking the steering wheel back and forth in a manner that bears little resemblance to actual driving? Well, that's the way you really do drive on the Ruta.

But going slow is part of the point, because the scenery is too gorgeous to miss: gold-green valleys towering tabonuco trees, bamboo trunks the size of football goalposts, crushed pink flowers carpeting the road like fine powder. Every turn held something stunning, all the way to Utuado, six hours away, where I finally stopped for the night at the Casa Grande Mountain Retreat(Road 612, Barrio Caonillas, Utuado, hotelcasagrande.com, bungalows from $105)—20 bungalows on a 100-year-old coffee plantation, run by an ex-lawyer from Long Island who offers yoga classes along with delicious churrasco steaks. After a long day of driving, the sound of the coquí frogs was the only relaxation I needed as I opened my windows to the mountain air and drifted quickly off to sleep.

16 MILES
Puerto Rico's tropical upland is also the heart of coffee country. Business has declined from its late-19th century heyday, but some small, family-run operations still survive along the Ruta.

My first stop was in nearby Ciales at Museo del Café (42 Calle Palmer, Ciales, 787/871-3439, free espresso), whose proprietor, an avuncular man named Pedro Maldonado, has a trove of records dating back to 1850, when Puerto Rican coffee was the toast of Europe. As he held forth on the island's history, I perused his antique grinders, sipping a cup of the free espresso he pours for every visitor. After that, it was on to Hacienda San Pedro(Jayuya, cafehsp.com), a small coffee farm in Jayuya where a worker named Ernesto gave me an impromptu tour "from bean to bag," trailed by a chocolate Lab named—what else?—Café.

Now that I was sufficiently caffeinated, it was time to burn some energy. Enter Cerro de Punta—at 4,389 feet, the highest peak on the island, near Jayuya. It's a steep 30-minute climb to the top—or a five-minute drive, as I learned from the family who pulled up in a Subaru. Either way it's worth it, as verdant hills spread out to the sea under a deep blue sky. By the time I descended—did I mention it was steep?—I was ready for a dip in nearby Salta de Doña Juana, a 120-foot waterfall. There I found young locals picnicking on sandwiches and beer, and a father and his three teenage sons spear fishing in the crystal-clear pool below.

Just a short drive down Carretera 143, near Jayuya, is Hacienda Pomarrosa (Carr. 511, Esq. Carr. 143, Barrio Anón, Sector Hogares Seguros, near Jayuya, cafepomarrosa.com, doubles from $125), a coffee farm and guesthouse run by German transplant Kurt Legner. We sat in the shade sipping cups of Arabica and snacking on homemade banana bread baked with fruit from the hacienda, interrupted only by the squawk of one of the farm's chickens. Afterward, Legner strolled through the rows of coffee plants—they'd only recently shed their springtime blossoms—pointing out the rose apples that give the hacienda its name and the pine trees he planted to remind him of his home in Düsseldorf. "I miss it sometimes," he said. "But here, it's much better."

154 MILES
The 95-mile section of the Ruta between Hacienda Pomarrosa and the coast is its most scenic stretch, slicing past lookouts where you can see both the Atlantic and Caribbean and skirting the mighty San Cristóbal Canyon. After the halfway point at Aibonito—which literally means "Oh! Beautiful!" (and lives up to it)—the trees open up and the mountain vistas burst into view.

It's a brisk ramble through the misty Bosque Estatal de Carite cloud forest, then the Ruta drops like an elevator, the smell of salt air wafting on the breeze. This is sugarcane country—the humid lowlands where t he sugar industry flourished for centuries, until prices dropped in the 1940s. The ghosts of the past still live on in Yabucoa, where the towering husk of the Central Roig sugar mill stands like a monument. One of the last working mills in Puerto Rico, before it closed in 2000, Central has been overtaken by groves of wild banana and papaya trees. Squint a little, though, and you can see what it must have looked like, before the tourists and hotels.

After Yabucoa, the Ruta comes to a sudden end near Maunabo. I took a sunset dip in the bay, then zoomed up the six-lane expressway toward San Juan, which, after the past three days, felt like traveling at warp speed. I sat outside a bar in Old San Juan and watched the revelers near the Plaza de Colón—crowds of young people, perhaps the grandchildren of those same old factory workers or hacendados, sipping café con leche or tumblers of rum. It felt like now I knew a little about where they came from.