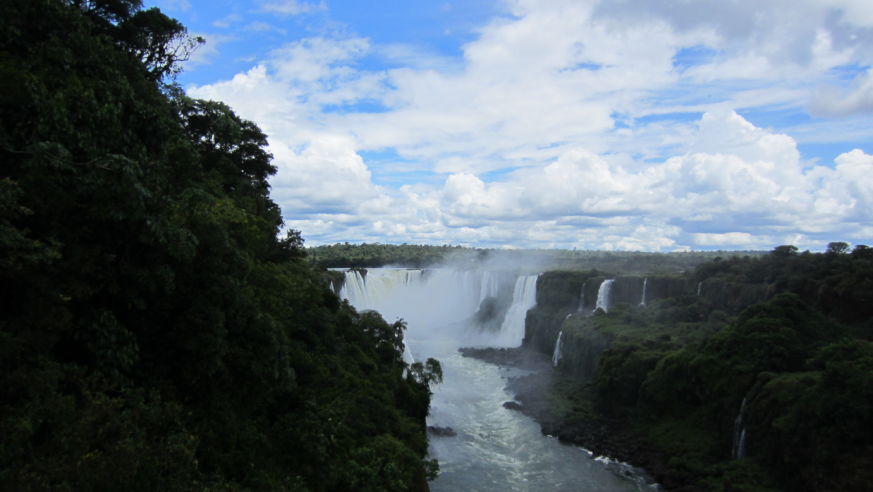 Discover the beauty of Iguazu Falls from the Brazilian side.

Article by Andreas Ambarchian, a freelance journalist from England. He writes about a variety of subjects including travel, wildlife and sports. This article was written on behalf of South American Vacations, providers of adventure tours in South America.

With tropical rainforests, Andean mountains, and arid deserts, the varied landscapes of South America make it the perfect place to enjoy an exciting adventure holiday.

The Amazon Jungle, Peru
When it comes to adventure, there are few places in the world that can compare with the rainforests of Peru. Even getting to the region's largest city, Iquitos, is a bit of trek: unreachable by road, visitors have to arrive in the area via air or boat. The real adventure, however, starts when you leave Iquitos to explore the surrounding rainforest on a jungle tour. One of the most biologically diverse areas of land on earth, the Peruvian Amazon is inhabited by 63% of all the mammal species in the entire country and home to a third of all the mammals in the world. In this area, you can also see endemic species of birds and reptiles as you trek through the dense forest foliage.

Where to book: To find the most reputable tour guides, go to the iPeru office in Iquitos on Calle Napo 161, Office 4, close to the Plaza de Armas in Iquitos. It's important to go with a trustworthy company because, although they are rare, unpleasant stories of trips gone wrong and abandoned tourists are not unheard of.

Cost: The typical cost for a two-day tour is around $200 per person.

The Death Road, Bolivia
The Bolivian capital of La Paz is a sprawling assortment of bare brick houses built precariously on the slopes of the valley that the city calls home. However, even more unstable looking than these dubiously positioned structures is the Death Road, a 41-mile stretch of gravel-covered dirt track that connects the capital to Coroico, a city northeast of La Paz. The infamous route is estimated to claim the lives of around 200 people a year, a figure that led the American Development Bank to label this stretch as the most dangerous road in the world in 1995. Although used by both cars and lorries, the road has recently become a popular tourist attraction, with backpackers keen to take on the deadly path. The route incorporates a nearly 12,000-foot descent, with tight, hairpin bends, almost all without the safety of guard rails.

Where to book: Many hostels in La Paz have links with tour companies.

Cost: The general price for one rider is around $60, less for larger groups.

Iguazu Falls by Boat, Brazil
The spectacular views of the waterfalls of Iguazu are probably best observed from the Argentinian side of the attraction, however, for those interested in feeling the raw force of the famous falls up close, a boat ride from Iguazu National Park in Brazil is undoubtedly the better option. The tour starts inside the park, with passengers first being transported to the water's edge by car. From the shore, boats leave every 15 minutes, with the ride itself lasting about two hours. Passengers are taken through some of the smaller cascades before getting within breathtaking proximity of the Three Musketeers Falls, the largest part on the Brazilian side. Anyone going on the ride should be aware that they will get very, very wet, however, any personal items can be put in the waterproof sack provided on the tour.

Where to book: Inside the park.

Trekking to the Lost City, Colombia
Built in 800 A.D. and abandoned during the Spanish Conquest of South America, the Lost City of Sierra Nevada in Colombia was left undiscovered for hundreds of years until, in 1972, a group of treasure hunters stumbled on the site. More than 40 years later, the Lost City remains largely unexcavated, accessible only via a 44km guided trek. Tours to the ancient site, located in the tropical jungle of the Tayrona National Park, generally leave every day during the high season between December and March, or every few days throughout the rest of the year. Walkers can choose between the option of a four-, five-, or six-day trek. Along the route there are mud paths, rainforest clearings, and swarms of mosquitoes as well as refreshing rock pools. The final stage of the trek includes a climb up 1,400 steps.

Where to book: At a travel agency in the nearby cities of Santa Marta and Taganga.