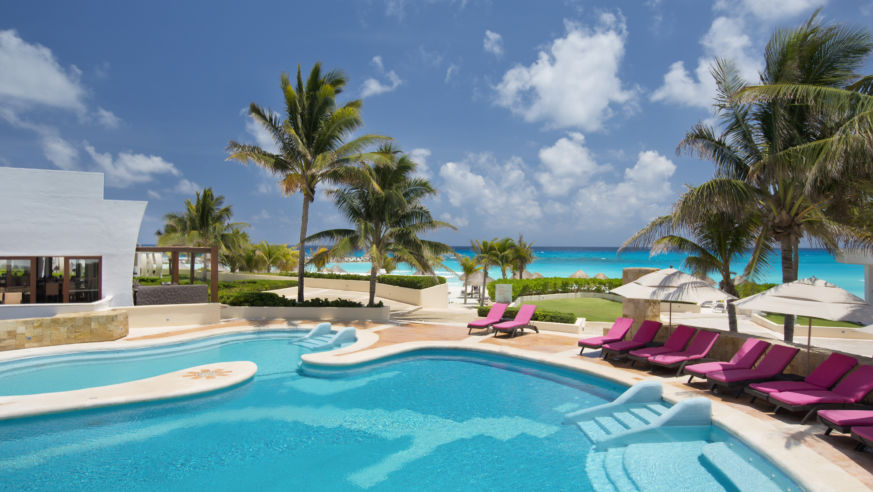 Sick of the snow? These poolside chairs at the Krystal Grand Punta Cancún are waiting for you.

From Cancún to spectacular Mayan ruins to Playa Del Carmen—and even swimming with (safe and gentle!) whale sharks—we take you to the knockout shores of Mexico’s Caribbean coast to show you how you can have the vacation of a lifetime without breaking the bank.

At first glance, this part of Mexico's Yucatán coast feels familiar, a sort of hybrid of Puerto Rico, Miami, and Hawaii with all the resort-lined streets and tropical palm trees. The 30-minute drive from Cancún International Airport along Boulevard Kukulcan, named after an ancient Mayan serpent god, winds its way through the city suburbs, across Nichupte Bay, and snakes along the barrier islands into Cancún's Resort Zone, where tourists spend all their time on the beach sipping margaritas and admiring the scenery. There's absolutely nothing wrong with that kind of vacation—hey, everybody needs a break and a fancy umbrella drink once in a while!—but there's so much more to Cancún and the Riviera Maya than meets the eye. This part of Mexico, once stereotyped as a spring break party spot, is now a major family destination for not only Americans, but people from Europe, Asia, South America, Central America, and all over Mexico. Here's our guide to getting a taste of the region's history, culture, and cuisine on a budget—plus some tips on where you should splurge on a few only-in-Mexico once-in-a-lifetime experiences.

TAKE A TOUR OF THE AFFORDABLE RIVIERA MAYA

If you don't want an all-inclusive resort, stay at the Krystal Grand Punta Cancún, which offers rooms right on the beach at the tip of the 7-shaped barrier island from $139 per night. This resort-style hotel is a great base for exploring the area, and puts you right in the middle of all the Resort Zone action, within walking distance of restaurants, bars, and nightlife. Take it easy in one of the first-come, first-served cabanas by the beach, or lounge by the resort's enormous pool.

It wasn't until we arrived in Isla Mujeres that I finally felt like I was in Mexico. There's just a different vibe there—you'll hear more Spanish being spoken than English and everything just seems more legit. Take a 20-minute ride on the UltraMar Ferry from Embarcadero Pier, Playa Tortugas Pier, or Playa Caracol Pier in the Hotel Zone to Isla Mujeres, the Island of Women. Ferries cost roughly $19 per person for a round-trip ticket. Take a taxi to the downtown part of Isla Mujeres and go for an afternoon stroll around town, shop at the little stores along the streets, chat with friendly locals, and admire the colorful murals that decorate the streets, often representing the area's appreciation for the ocean, wildlife, and Mayan history. If you're feeling adventurous, stop by the Garrafon Natural Reef Park, where you can do everything from snorkeling and kayaking to hiking and zip-lining. The park is also home to an impressive sculpture garden and ruins of an ancient Mayan temple dedicated to Ixchel, the goddess of fertility, at Punta Sur. Stop by Dolphin Discovery for the chance to swim with these majestic creatures. Tickets to Garrafon Natural Reef Park start at $89 per adult and $59 per child ages 5-11 for a full day of activities. Dolphin Encounters at Dolphin Discovery start at $109 for adults and $89 for children ages 6-12. Check the website to see a variety of packages, including tickets to both parks from $129 for adults and $99 for children ages 6-12.

Swim With the Whale Sharks

If ever there was a time to splurge on a special bucket list activity, this is it. Solo Buceo's half-day Whale Shark Snorkel Tour leaves Solo Buceo Pier in the Resort Zone at 6:45 a.m. and takes you to Azul, a special spot two hours off the coast of Cancún where whale sharks are known to congregate between March and September (though the peak season for seeing whale sharks is during July and August). All you need to bring is biodegradable sunscreen, a towel, your swimsuit, and a waterproof camera or a waterproof cover for your smartphone, and Solo Buceo provides the rest—snorkel gear including a mask, fins, and life jacket, and a sack lunch for the ride back. Now, repeat after me: "I will take Dramamine before I get on the boat even if I don't feel like I need it." Trust me, it's better to be safe than sorry, and you'll be out on the boat until 2 p.m. When you get to Azul, keep those cameras out—hundreds of whale sharks, each measuring up to 40 feet long, are feeding on tiny plankton floating in the shallow surface waters, opening their giant toothless mouths to the krill and gliding effortlessly through the water. You, on the other hand, will have to swim as fast as you possibly can to keep up with these blissfully calm creatures (who are not interested in eating you no matter how big their shark fins are), all while wearing snorkel gear, fins, and a bulky life preserver because you are in very, very deep water. I have to admit this was the craziest and most terrifying thing I have ever done—I wasn't afraid of the sharks themselves, just the fact that we were in incredibly deep water with who knows what other types of sharks!—but our guide was wonderful and even offered to hold my hand in the water when we first jumped in to meet the whale sharks. Referring to them as "whales" also helps, by the way. In the end, each person gets to jump in three times, and it was something I would definitely do again in a heartbeat. From $175 per person.

Get Your Fill of Mayan History

If you're renting a car, I would strongly suggest making the 2.5-hour pilgrimage along Mexico Highway 180D out to see Chichen Itza, one of the most impressive and complex set of ruins on earth. Leave plenty of time to explore at your own pace. If you're short on time or not planning to leave the Resort Zone, stop by the Museo Maya de Cancún (the Cancun Maya Museum) along Boulevard Kukulcan, for a look at the San Miguelito ruins, and a chance to learn more about the ancient people who first settled in this part of Mexico—all for less than $5 per person.

Located about an hour's drive south of Cancún International Airport is Playa del Carmen, a beach town paradise on the Mexican mainland just across the water from Cozumel. Stay at the Occidental Royal Club Grand Xcaret Resort. Enjoy all-inclusive perks like day- and nighttime entertainment, unlimited meals, snacks, and drinks at 11 on-site restaurants, 10 bars (including one disco!). Chill by one of the resort's five swimming pools or on the beach and get active with family-friendly activities like mini-golf, archery, tennis, ping-pong, dance classes, and shuffleboard. From $135 per person per night.

Take a Day Trip to Cozumel

For a fun day trip, hop a 45-minute ferry from downtown Playa del Carmen and spend some time wandering the colorful streets of Cozumel (ferry tickets are $11 for adults and $6.50 for kids each way). The ferry leaves you at Cozumel's Punta Langosta Cruise Ship Pier, and from there it's just a short walk downtown to area shopping and dining, or a quick cab ride away from a wide variety of unique aquatic activities you won't find at home like swimming with dolphins at Chankanaab National Marine Park, or exploring the depths with Atlantis Submarines Cozumel.

Tulum, the only Mayan city built on the coast, was originally an important seaport, supposedly a place where Mayan royalty came to get away from it all, and of course that tradition lives on, as Tulum continues to be a major tourist destination today. The Tulum ruins are made of limestone and feature an impressive wall that surrounds the site on three sides. Don't miss the chance to explore El Castillo, one of the oldest and best preserved structures on the site, and take a peek at the Temple of the Frescoes to see murals that depict the Mayan worlds of the living and the dead and representations of the gods.

While you're in the area, don't miss a trip to Xcaret, an eco-archaeological park where you can enjoy gorgeous 360-degree panoramic views of the Caribbean from the top of the rotating scenic tower, learn more about the history of Mexico at Hacienda Henequenera, visit historic sites like the St. Francis of Assisi Chapel, the Chapel of Guadalupe, and a traditional Mexican Cemetery, as well as a number of Mayan archaeological sites and a replica of an ancient village. Sail down Paradise River on one of Xcaret's rafts, to get a better look at the deep jungles and underground rivers within the park. Adults should stop by the Vino de Mexico Wine Cellar, an underground cellar in Xcaret's main plaza featuring more than 180 Mexican wine labels and more than 400 years of history surrounding Mexico's wine industry. Don't miss cultural performances like the Xcaret Mexico Espectacular and Voladores de Papantla. Kids will love Jaguar Island, the Coral Reef Aquarium, and the chance to see other area wildlife up close. General admission to Xcaret starts at $89 per person when ordered online, general admission from $99 per person at the gate, packages that include lunch and beverages are an additional $27 per person.