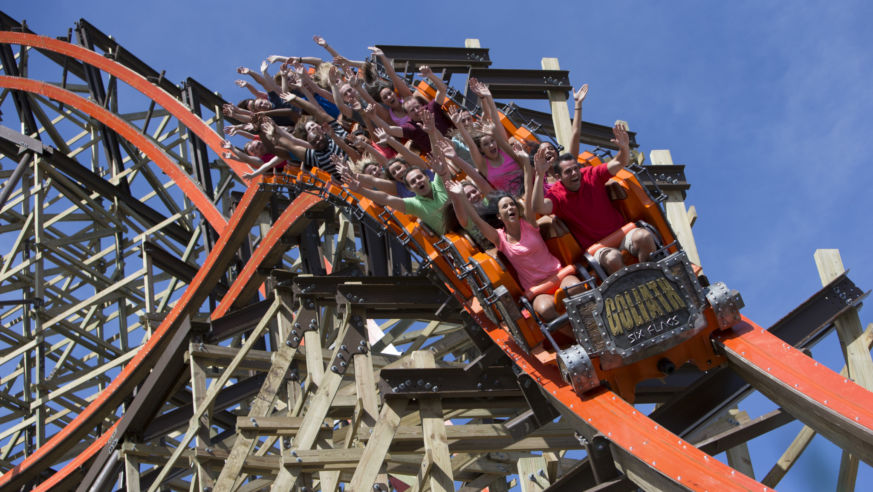 Goliath at Six Flags Great American in Gurnee, Ill. gets an honorable mention for being the world's tallest, fastest and steepest wooden roller coaster.

This article was written by Nicole Rupersburg and originally appeared on Fox News Travel.

There’s nothing more American than a ride on a roller coaster, and the U.S. has some of the best in the world.

But it's no secret that Americans have a need for speed, and that's as evident in our roller coasters as it is anywhere else. Strap yourself in and secure all loose items: These are the 10 fastest roller coasters in the U.S.

Knott's Berry Farm, Buena Park, Calif.
With a 1950s Grease and greaser theme, Xcelerator looks way more innocent than it is. Using a hydraulic launch to rocket you from zero to 82 mph in 2.3 seconds, this rockin' coaster shoots you straight into the air and back down again at a 90-degree angle for one minute and two whole seconds of pure adrenaline.

Six Flags Magic Mountain, Valencia, Calif.
This hypercoaster features a 255-foot drop into an underground tunnel, which you will take at 85 mph, followed by another drop of 185 feet. During this 3-minute ride through ancient ruins, you'll experience weightlessness as well as a g-force of 4.5 g. The ride is closed while awaiting a new lift chain, but you can keep yourself occupied until it reopens with the new Twisted Colossus wood-steel hybrid coaster opening this spring.

Kennywood, West Mifflin, Pa.
This modest amusement park in Pittsburgh's burbs has a wicked surprise in store for you: Phantom's Revenge, a 1-minute and 45-second ride that features a 232-foot drop and a top speed of 85 mph. It might be "America's Favorite Traditional Amusement Park" since 1898, but Kennywood is definitely keeping up with the times.

Six Flags Over Texas, Arlington, Texas
Not just a hypercoaster, but a hyper twisted coaster, Titan drops you 255 feet, then twists you through not one but two mind-warping 540-degree spirals, then continues through banked turns at 85 mph on the 5,312-foot track, for a grand total of 3 minutes and 20 seconds.

Kings Dominion, Doswell, Va.
We have now crossed the 90 mph threshold with Intimidator305. This one-ups the ante not by a little, but by a lot: Not only does it reach a top speed of 90 mph, but it also has a 300-foot drop at an 85-degree angle.

Cedar Point, Sandusky, Ohio
This coaster is so huge, it created a whole new coaster category: the giga-coaster. This 300-foot, 93 mph monster gets you up its first hill quickly with an elevator cable lift system, then drops you down at an 80-degree angle. And that's just the beginning of this 2-minute thrill ride.

Carowinds, Charlotte, N.C.
The brand-new Fury 325 is the world's tallest and fastest giga-coaster. Taller than the Statue of Liberty, this "hornet's nest of rebellion" is 325 feet tall, goes 95 miles per hour and has a staggering length of 6,602 feet. That adds up to a ride time of 3 minutes and 25 seconds.

Six Flags Magic Mountain, Valencia, Calif.
Maybe not quite faster than a speeding bullet but still pretty damn fast, Superman: Escape from Krypton shoots you from 0 to 100 mph in seven seconds flat, straight up 415 feet in the air at a perfect 90-degree angle—backwards. After experiencing weightlessness for 6.5 seconds, you plummet down at 92 mph. You don't have to be the Man of Steel, but you'll certainly want a stomach of steel for this one.

Cedar Point, Sandusky, Ohio
Get ready to have your face peeled off and don't forget to re-collect your innards on your way out. Top Thrill Dragster, one of only two strata coasters in the world, features a hydraulic launch that shoots you through the time-space continuum from a dead stop to 120 mph in four seconds, straight up into the sky 420 feet and twisting straight back down again. It will be the worst/best 17 seconds of your life.

Six Flags Great Adventure, Jackson, N.J.
Better bring a change of underwear for this one. Kingda Ka, the other stratacoaster, is the tallest, fastest, most insane roller coaster in North America, as well as the world's tallest and second-fastest. (The 149 mph Formula Rossa in the United Arab Emirates is the world’s champ.) The King, also using a hydraulic launch, shoots riders out at 128 mph in 3.5 seconds to a height of 456 feet at a 90-degree angle, and back down in a 270-degree spiral, followed by a 129-foot camel hump hill, presumably to allow your brain time to register what just happened before you return to the platform.

Children now dictate where they want to go travel

All-you-can-fly Surf Air: Is private jet travel finally worth it?

Harmful bacteria may be lurking in your single-serve coffee machine