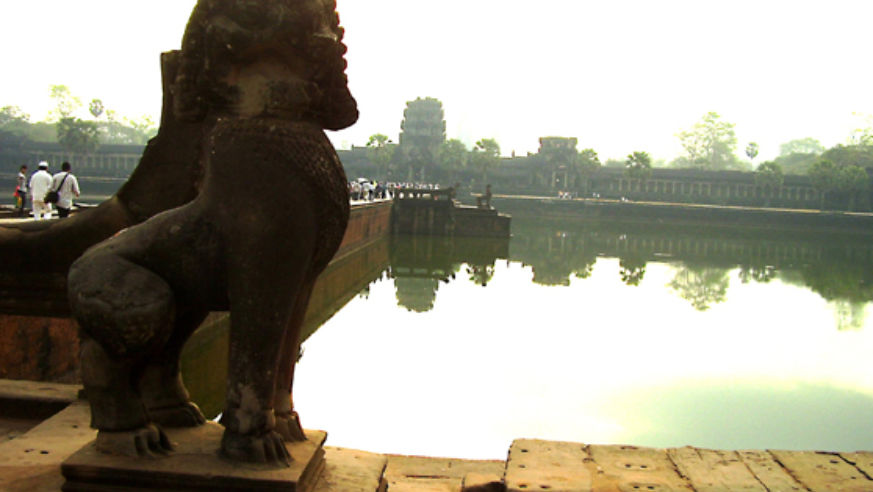 Pay a visit to Angkor Wat the next time you're in Southeast Asia.

Evoking dreams of an exotic past, the temple of Angkor Wat is the number one attraction in Cambodia. It is also a UNESCO World Heritage Site and the world's largest religious monument. Cambodia has taken Angkor Wat as its national symbol; a depiction of it even appears in the flag. Originally built as a Hindu temple, Angkor Wat remains crammed with stone reliefs and statues of Vishnu, Ganesh, Shiva, Hanuman, and the mystic dancing girls, the Apsaras. After the disintegration of the Khmer Empire it was eventually repurposed as a Buddhist temple. Throughout the centuries, the temples have remained in use and they are still the stage for ceremonies and observations for both Buddhists and Hindus.

In the 12th century, King Suryavarman ordered the construction of Angkor Wat as his official temple and royal capital city. In the Khmer language, Angkor Wat means temple city. The location was central, strategic, and fertile, and it fit into celestial alignments. The arrangement of the structures relates to the positions of the earth, the sun, moon and the stars, and to the seasonal equinoxes. The central temple symbolizes Mount Meru, the Hindu home of the gods. The surrounding moat represents the sea. The four sides face the cardinal compass points.

Angkor Wat is one of many temple complexes near the modern city of Siem Reap. These include: Angkor Thom, Ta Prohm and Bayon Temples, Phimeanakas, and the Terrace of Elephants. Ta Prohm Temple is instantly recognizable. It was a key setting in the hit movie, Tomb Raider, chosen for its exotic, overgrown state. Tourists love to pose for photos before the gnarled jungle roots and branches that have grown into the carved rock over the centuries, disassembling the work of ancient artists and masons. The temples are a circuit of several miles that could take years to fully explore. Seam Reap (the city nearest the temples) in the Khmer language means "defeat Siam," the enemy of the Khmer for a millennium. They overran Angkor Wat in 1431, and the site was forgotten by the outside world. During French colonial times, explorer Hermi Mouhot publicized the ruins. Restoration of the site has continued ever since, interrupted by War and reign of the Khmer Rouge. Today Angkor Wat draws half a million visitors a year. The Angkor Archeological Park (A World Heritage site) has one day admission fees of just $20. The site is open from 5:30 a.m. to 5:30 p.m.

When I arrived in Cambodia, fellow travelers were eager to offer me advice and to share their temple experiences. The guidebooks I had read suggested walking through the temples in the morning to avoid afternoon heat. This would take a minimum of five days. Temple veterans were quick to dismiss this strategy and advised me to rent a bicycle in Seam Reap. I could see all the temples in a couple of days and the cost would be minimal. Another advisor believed a bike would be too strenuous in the heat of the Cambodian plains. A tuk-tuk could be hired for the entire day for $20. Another option was a bus tour, offered at most area hotels for a similar price.

The easiest way, if you are with a two or three other visitors, is to hire a car and driver. In Phnom Penh I found a driver to take my two friends and me the five-hour ride to Siem Reap, and then all the next day drive us around the temples; all for $130. Split three ways, it was an unbeatable deal and a great convenience.

By one o'clock the temperature was hot and humid. Properly seeing the main temple, Angkor Wat, involved walking three or four kilometers across the moat, around the sculpted galleries, and climbing the steep stairway to the top of the artificial mountain. I couldn't imagine walking or riding a bicycle another five kilometers to the next temple complex. Instead, at the appointed hour, our driver was waiting near the gate. Waiting in the air conditioned sedan were iced towels and bottles of water. As we refreshed ourselves on the way to The Terrace of Elephants, our driver explained it was a viewing stand from which the royal Khmers watched parades and processions. The life-sized stone carved elephants were complete with their Mahouts (drivers) and ceremonial garb.

Later at Bakhent Temple, the stone elephants came to life for us. A circuit of the temple aboard an elephant was offered for $10. It was a break from walking in the afternoon heat and a unique, high vantage view of the ruins, a perfect way to end the day's tour.

This article was written on behalf of Tucan Travel, providers of tours to Costa Rica and throughout Latin America. Born in The Hague, Andrew Kolasinski arrived in Canada as a small child riding in the luggage rack of a DC-7. Since then he has felt at home anywhere. As the publisher and editor of Island Angler, Andrew spends half the year fishing for salmon and trout, and in the off-season, traveling the world looking for a story.