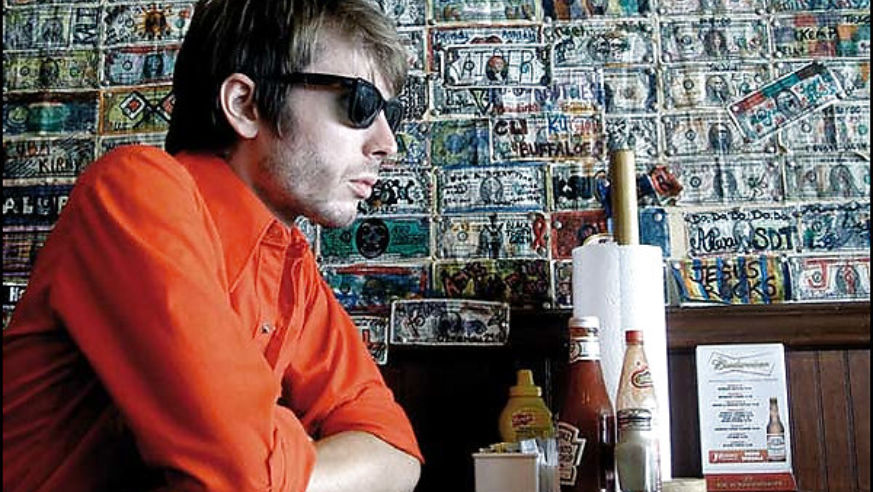 In his new book Sound Bites, lead singer Alex Kapranos—who dreamed about forming a rock band while working in a restaurant kitchen—recounts vivid, thoughtful tales about everything from doughnuts in Brooklyn to blowfish in Osaka. Read an excerpt about his favorite place to eat back home in Glasgow.

The food has been in the fridge for two and a half years. I'm back in my Glasgow flat. I'm not home often. Everything is as it was when I left for Sweden, in the summer of 2003, to record our first album. A packet of vine leaves, a jar of chilli paste, something that looks like dripping and a carton of orange. All still there. Tonight I'm eating out. Again.

I rattle West of Dennistoun in a cab, along the fizzing spray of motorway, a mile of dirty concrete cast across the city like a slice of gristle through the Glaswegian heart. Clattering off at Charing Cross, we pull up in the dead-end of Argyll Street, Finnieston. Brutalist blocks of flats loom from the gentle rain. The scaffolding-clad Kingston Bridge dominates the skyline. Sodium half-light ripples off puddles, black as blood at midnight. A draggled whippet shambles past in a fluorescent orange coat.

I'm eating at the oldest, noblest restaurant in town.The Buttery was built in the mid-nineteenth century. Originally a wine merchant's cellar, it expanded over the next hundred years and gained a reputation for its food. In the late 1960s, Glasgow's town planners tore up the city. The tenements of Finnieston were razed. The only building left standing was the Buttery. Apparently, it survived because the architects and contractors ripping up the city didn't want to lose their favourite haunt. A Masonic plaque on the wall outside, bright under a lonely spotlight, may be another clue to its survival.

I'm eating with a friend who updates me with six months of gossip, asks the waiter for another one of those crispy things and whispers that she feels awkward as a socialist for eating somewhere like this. She's distracted by a bottle of heavy red, and we lean back into the padding of our chairs. The peaceful warmth envelops us like a good library with the reassurance of ancient oak, leather and stained glass.

Like the best of Scottish menus, the Buttery's is an entente cordiale of French and Caledonian cuisine: Loin of Ayrshire Lamb and Provencal Vegetables. Smoked Confit of French Hen with Spiced Haggis-- the chieftain of the pudding race, maligned in undeserved disgrace. I love this bag of sheep bits and oatmeal. In an age of gourmet sausages and head-to-tail eating, it is worthy of a higher place in the culinary canon. The aromatic richness is balanced by one of the greatest textures to greet the teeth, a gentle bite between your porcelain. While haggis now regularly appears on the menus of good Scottish restaurants, it is still treated with suspicion outside the country. I can't recommend it enough. It is a true regional delicacy: nothing else in the world has the same texture or flavour. It's not even a particularly acquired taste--there is nothing too extreme about it. It is best when bought from a good local butcher in Scotland, but the biggest supplier of good haggis is MacSween's of Edinburgh. They export all over the planet and, if the idea of a sheep's pluck boiled with oatmeal in a stomach lining is too much for you, they also make a vegetarian version.

Poached pears and whisky ice cream conclude one of the best meals I've had in around 60,000 miles of traveling. As we step back out into the street, there is a sense of Brigadoon in the drizzle. It seems improbable that this place could still be there in the daylight of tomorrow. I'm just glad that Masonic architects spared it and saved me from my forlorn fridge.