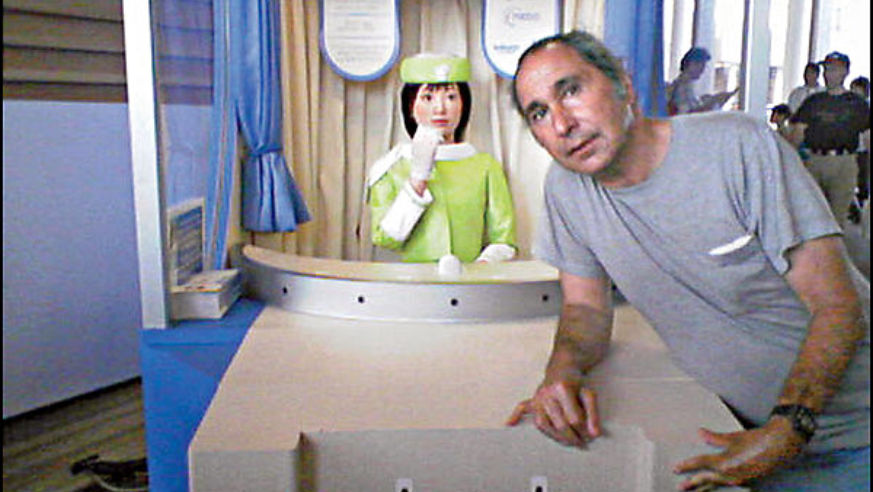 New Prize: A Weeklong Vacation Rental
The best response we receive before March 31 wins a vacation rental courtesy of HomeAway.com. The prize includes up to six nights in any vacation rental of the winner's choice, up to $300 per night, for a maximum of $1,800, including taxes and surcharges. Winner must choose a home in three destinations anywhere HomeAway.com represents vacation homes; HomeAway will provide accommodations in one of those destinations. Prize is valid for a maximum of four people from June 1, 2007, to May 31, 2008. Blackout dates may apply. The prize is subject to availability, nontransferable, and nonnegotiable. For more information on HomeAway, visit homeaway.com.

At Expo 2005 in Japan, robots were featured everywhere. The best ones were the multilingual information-bots that were programmed to answer questions about the event. These female robots looked, acted, and talked like real people. "You're very beautiful," I said to one. "Will you marry me?" Expecting her to tell me that she was programmed to only give advice about Expo, I couldn't believe her actual response: "Underneath these clothes I have a beautiful body," she said. "But I cannot take them off here."

Sisterhood Of The Traveling Skirt Is A Totally Different Movie
My friend Bethany and I wanted to ride donkeys while in Greece, just like in The Sisterhood of the Traveling Pants. We were both wearing skirts, so we asked the man running the tour if we could ride sidesaddle. Not a minute after he agreed, he helped Bethany onto her saddle and then whipped her legs around to either side. "Sir! Sir!" she pleaded, feeling exposed. (Her skirt wasn't a flowing one, so she had to hike it up to keep it from tearing or cutting off her circulation.) The donkey took off down the stairs. "You know I'm your best friend," she screamed, "because I wouldn't do this for anyone else!" Katie Baldree, Atlanta, Ga.

Because If It Ain't From Nobu . . .
After a few days in New York City I was used to the "spare change" people. I'd been warned not to give them money, but I tended to do so anyway. One evening, after a large meal at a Greek restaurant (so large I ate only the appetizer), I was walking back to my hotel carrying the bag of leftover roasted chicken, potatoes, and green beans, when a young man came toward me chanting, "Food, I need food. Do you have money for food? I'm so hungry." I thrust the bag toward him. Before taking it, however, he looked at me and asked, "It's not sushi, is it?" Andrea Hollander Budy, Mountain View, Ark.

Safe Phone Sex: The New Frontier In Public Health
I was traveling with my friend Gladys in the Peruvian Andes when she needed to use the bathroom. Being in a very small village, we were invited to use the bathroom of a local family. It was basically a concrete hole in the ground surrounded by a fence. While I was holding the door closed, I heard a noise, as if something had hit the concrete. I asked Gladys if everything was OK, and she said, "Yes"--but she later realized that she was missing her cell phone. Frantic, we ran back to the latrine and fished around in the dark hole with two long sticks. Unbelievably, we were able to pull up the phone. It looked and smelled as bad as we thought it would. We never imagined it would still work, but Gladys wanted to keep it to trade for another phone in Lima, so we submerged it in two pails of water and even had the owner of our hotel give it a Clorox bath. We wrapped the phone in a plastic bag and set it on a table to dry. Just as we were about to drift off to sleep, the cell phone rang! Neither of us particularly wanted to touch it, but Gladys picked it up and poked the antenna through the bag. It was her husband calling, and through gales of laughter we told him our story--although all he could really hear was a crinkling bag. Bonnie Laycock, Wichita, Kans.

Reason #18 Why You Can't Go Wrong With A Little Black Dress
I've learned over the years that the best way to visit cathedrals is to attend a service--with the lights on and the music playing I can experience them the way they were intended. So while in the Tuscan hill town of Pienza, I popped into a small Renaissance cathedral. It seemed crowded for a Thursday afternoon, but I was pleasantly surprised by a cello solo of exceptional loveliness. I quietly moved several pews closer to the front. After about 10 minutes of gazing peacefully at the ceiling, statues, and beautiful religious paintings, I looked over at the center aisle, and my heart sank. There was a coffin! I had crashed a funeral. Carolyn Casady Trimble, Urbana, Ill.

You can find more True Stories in the March 2007 issue of Budget Travel magazine.