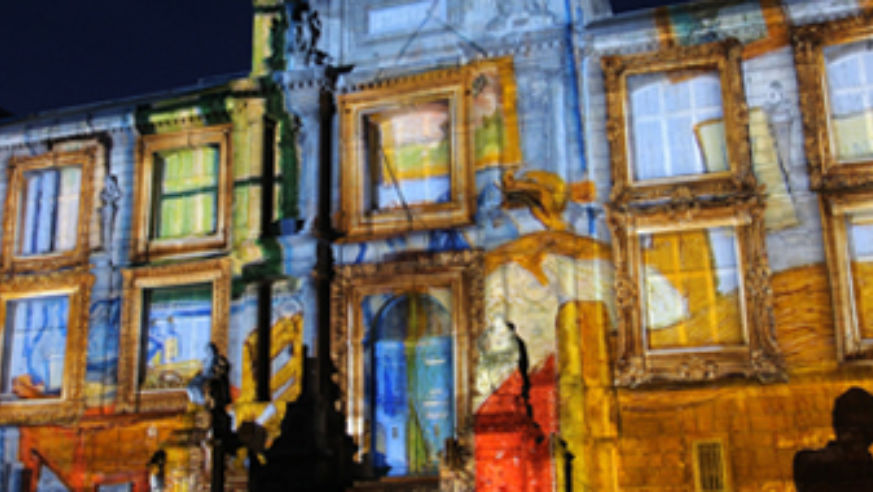 Take a train about an hour outside of Paris this summer, and the trip is sure to leave a lasting impression. Normandy, the region in northern France that was home to Claude Monet and a hotbed of impressionist activity in the latter half of the 19th century, is hosting its first-ever Impressionist Festival. From June to September, over 150 events celebrate the arts and culture influenced by the impressionist movement—not just painting (with 15 major exhibitions), but also music, dance, theater, photography, architecture, and more.

The centerpiece of the festival is the exhibit "A City for Impressionism: Monet, Pissarro, and Gauguin in Rouen" at the Rouen Fine Arts Museum (through Sept. 26). The collection of 100 paintings, many never exhibited in public before, explores the city of Rouen's impressionist-era scene (admission $15). Make sure you stick around the museum until nightfall: Each evening, the façade near the Esplanade Marcel Duchamp is transformed by a light projection show called Impressionist Nights.

In Giverny, visit Claude Monet's House and Gardens (admission $7.50), where you can see many of the natural elements that inspired his work, including the Oriental water garden with its Japanese bridge and a pond brimming with—what else? —water lilies (see them blooming at their best in August). Giverny is also home to the Giverny Impressionism Museum, which is hosting an exhibit of 50 paintings entitled "Impressionism on the Seine: From Renoir and Monet to Matisse" (through July 18) that retraces the history of impressionism through the use of scenes captured along the Seine (admission $8).

Starting July 13 and 14 and continuing throughout the summer, guingettes will be revived throughout the region. The lively open-air cafés were popular among—and immortalized on canvas by—impressionist artists; often set on the banks of a river like the Seine, the guingettes were characterized by carefree music, dance, games, drinks, and food.

One of the festival's final events is the Great Impressionist Ball in Rouen on September 24. The public is invited to the indoor/outdoor ball, under only one condition: They must come dressed in white. As the crowd dances, it will serve as a blank canvas, on which a light artist will project splashes of color—like brushstrokes—an effect that will be captured on video and displayed on a wide screen so that the audience can watch themselves become transformed into a work of art.

For a full list of events, including Seine cruises, picnics, painting workshops (learn to paint in one of Monet's actual studios!), cooking classes, and special itineraries, visit impressionism-normandy.com.

Getting there: Much of Normandy is easily accessible by train from Paris. Rouen is as short as a 70-minute trip (but you'll pay more for the faster trains), with one-way fares starting at $26. To reach Giverny, take the train from Paris to Vernon (45 minutes, from $17). From there, you can travel the remaining four miles to Monet's house by bus, bike, taxi, or on foot.

MORE
Plan your trip at The Impressionism Normandy website