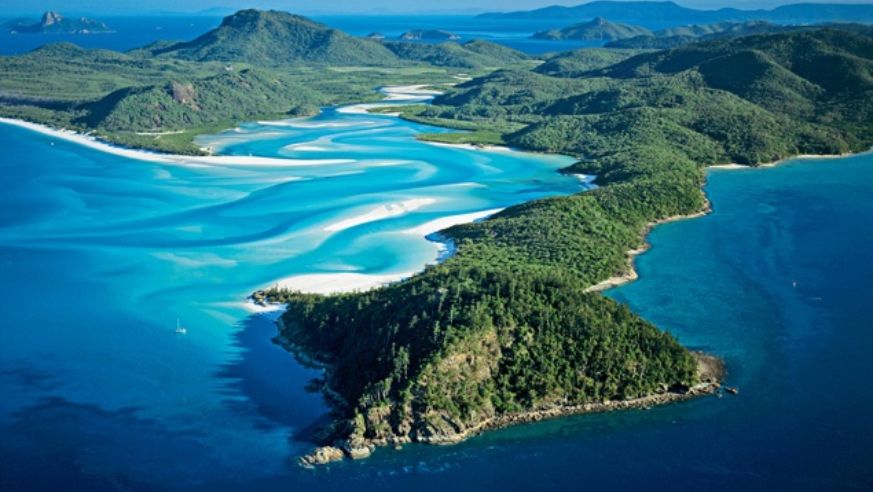 The coral is spectacular and the marine life will blow your mind—and the beaches are dreamy too!

Luke Mairs's 4 p.m. departure time seems, at first, like a mistake. When his 47-foot white catamaran, On Ice, is finally prepped and putters out of Airlie Beach for a two-night sailing trip in Australia's Coral Sea, it's far too late to go beneath the waves and get face-to-snorkel with the trip's star attraction, the Great Barrier Reef. But as On Ice slips farther away from the east coast of Queensland the light starts to fade, and you suddenly appreciate the method to Mairs's mad schedule. The sun sinks behind the boat and sets the scene ahead of us on fire, with a spectrum of oozing reds and pinks cast across the water. A string of islands, the Whitsundays, comes into focus, only to fade from a rich hunter green into an inky black silhouette. It's like someone just turned on an IMAX nature film and projected it in front of your face. "If it's your first time to the Whitsundays," Mairs says, "then this is the perfect introduction."

There are countless access points to the Great Barrier Reef. Americans tend to set off from Cairns, a mid-reef port that's also a major cruise-ship hub. The Whitsundays are where the Australians go, and not just because they're less crowded. They're also arguably the only spot along the 1,400-mile Reef that offers attractions above the waterline that rival what's below. There are 74 Whitsundays in all, and aside from a few given over to posh resorts, 66 of them are undeveloped, with a fragrant mix of hoop pines and lowland rain forest at their hearts and postcard-worthy beaches on their edges. You have all the thrills of the Reef—the sherbet-colored coral, tropical fish, giant turtles and rays—with the added bonus of a tropical-island chain.

Plenty of companies offer sailing trips out of Airlie Beach, but for years they fell into two categories: upscale charters that can run $1,000 or more per day, or shoestring party boats where the beer-guzzling passengers easily out-drink the fish. In 2007, Luke and his younger brother, Tristram, moved to town from Melbourne and started offering affordably civilized overnights aboard On Ice and another vessel called Iceberg. Each boat sleeps 10—there are four surprisingly roomy cabins along with three bathrooms, a galley, and a dining area. Luke's girlfriend, Isabelle, serves as first mate and cooks all the meals, and all of them are delicious (though after a full day in the water even a piece of salty driftwood would go down easy).

Each morning, Luke heads to sheltered coves perfect for beginners like us. Squeezing into our full-body wet suits, we novices are about as quiet as a pack of elephants, and I'm convinced that we've scared away any fish within 50 nautical miles. Yet within seconds of dipping in, I'm surrounded by such a variety of colorful sea life, it's hard to identify what's what—a bright orange-and-white clown fish darts behind a purple brain-shaped coral just as a turtle, as big as I am, glides right next to me. I spend a good half hour following in its wake along the coral ledge.

"The fact that Luke is a local is pretty rare—most of the tour leaders just come into town for seasonal work, so they're not as familiar with the islands," says Daniel Fisher, a Perth native who signed on for an On Ice trip with two friends. "Luke has contingency plans if the snorkeling scene is too crowded or the waves are too rough at one place." He even has toys lashed to his boat in case you'd rather not snorkel at all. There's a collection of stand-up paddleboards, which are wider, more manageable versions of surfboards that let you balance on top and use an oar to navigate to shallow waters. You can easily see the Reef just beneath the surface. There's also a clear-bottomed kayak, made of translucent plastic, which gives the illusion of sitting on an aquarium.

There's no way anything on land could live up to that kind of show, right? That's what we skeptics are thinking when Luke suggests heading ashore. Our first stop is Betty's Beach, which looks like a slice of the New England coast, plopped into the Caribbean. Thick stands of pine collide with milky white sand and aquamarine water so clear that when we hike up to a scenic overlook a half hour later, we can spy the outline of a manta ray cruising in the bay below. It's nearly perfect—aside from the presence of a dozen other sailing groups. "This is where everyone comes," Luke says later, as he's steering us away from Betty's. "You kind of have to see it—but it shouldn't be the only beach you see."

We anchor next at Whitehaven Beach, a few miles south. Whitehaven turns out to be just as gorgeous as Betty's, only we have the place to ourselves, save for a few pieces of coral and a lone starfish. Some folks take off their shoes and stroll along the waterline, but the rest of us simply lay out and relax in the sun. The sand is so fine, soft, and startlingly white that it seems like baby powder. A few hours later, when Luke offers to take us to another snorkeling spot or let us stay put, a few people say they'd rather hang at Whitehaven. Everyone ultimately agrees to go snorkeling—I, for one, want to find my turtle buddy again. But the fact that we've found a piece of dry land nearly as tempting as the magical maze of the Great Barrier Reef makes one thing clear: We've just had the surf-and-turf vacation of a lifetime.