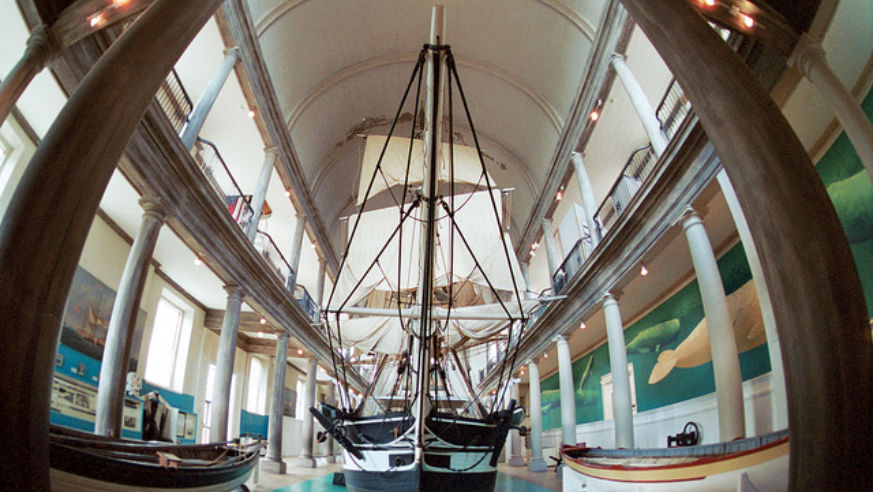 The New Bedford Whaling Museum pays homage to this Massachusetts city's past, and also points the way to a vibrant future devoted to science, art, ecology, and history.

After a few minutes in New Bedford, MA, a welcoming little city of about 95,000 people less than an hour's drive east of Providence and south of Cape Cod just off I-195, you'll notice that the residents love to talk about their town. A few more minutes and you'll totally understand why. Few places in New England pack as much history, food, and fun into a handful of cobblestoned blocks.

I started my visit, appropriately enough, at the New Bedford Whaling Museum (18 Johnny Cake Hill, whalingmuseum.org, adults $14, seniors $12, students 19+ $9, children and youth $6). In the 19th century, New Bedford was the epicenter of the international whale-oil industry (comparable at that time to today's oil industry in its importance to the world's economy), and the city's whaling museum is the largest of its kind in the U.S. As my 11-year-old daughter and I walked into the museum's beautiful big lobby, with its impressive whale skeletons hanging from the ceiling, I was anxious. After all, my daughter was brought up to understand that hunting these amazing sea mammals is wrong, and she was extremely vocal in her objection to the very idea of a whaling museum. But as soon as our guided tour began, I breathed easy: The staff of the New Bedford Whaling Museum love these animals as much as any of us, and a good portion of the galleries are devoted to ecology, conservation, and putting history—including not only whaling but also the slave trade, New Bedford's ethnic diversity, and the city's role in the Underground Railroad—in a clear context. I recommend setting aside an entire day or more to take in all this museum has to offer, including replicas of whaling ships (one of which is half-life-size and can be boarded and explored by grown-ups and kids alike), beautiful works of art, and multimedia presentations.

Step outside the whaling museum and you're smack in the middle of the New Bedford Whaling National Historical Park (nps.gov/nebe), which includes a number of restored 18th-century buildings and a superb visitors center at 33 William Street, featuring displays about the city's history, a theater, and presentations by rangers. Stroll the streets and you'll meet New Bedford residents who can't wait to tell you about their downtown's great food, public gardens, bustling harbor, and festivals. Admire the stately homes that once belonged to whaling captains and their families and you may recall what Herman Melville wrote of the city in Moby-Dick: "... all these brave houses and flowery gardens came from the Atlantic, Pacific, and Indian oceans. One and all, they were harpooned and dragged up hither from the bottom of the sea."

Speaking of Melville, one of the most popular sites in downtown New Bedford owes its celebrity to that author's wild imagination: In the 1840s, Melville himself set sail aboard a whaling vessel out of New Bedford and, like many sailors before and after him, attended services at the Seamen's Bethel (15 Johnny Cake Hill, admission free), which he immortalized as the "Whalemen's Chapel" in Moby-Dick. I was blown away to discover that the pulpit of this little chapel is actually shaped like the prow of a whaling vessel—exactly like the one Melville describes in the chapter "The Sermon" in Moby-Dick. My enthusiasm was only slightly dampened when I learned that the pulpit was, in fact, added more than a century after Melville's visit in order to delight visitors who had enjoyed John Huston's 1956 film adaptation of Moby-Dick (starring Gregory Peck as the monomaniacal Captain Ahab), in which Orson Welles, as Father Mapple, climbs a rope ladder to deliver a booming commentary on the story of Jonah—from an elaborate, prow-shaped pulpit. Spend some time exploring the chapel's artwork and enjoy friendly and informative conversation with one of the enthusiastic docents on duty (and don't forget to leave a donation).

New Bedford abounds in historical, artistic, and just plain fun sites. Rotch-Jones-Duff House (396 County Street, rjdmuseum.org, adults $6), with its gorgeous articles of furniture, handpainted wallpaper, crystal, and gowns lets you see how the other 1 percent lived in the 19th and early 20th centuries thanks to both the whaling and oil industries. The New Bedford Museum of Glass (61 Wamsutta Street, nbmog.org, $5) is a must-see, with a growing collection of art glass that includes masterpieces of New Bedford's fabled Mt. Washington and Pairpoint factories. And after all that history, kids of all ages will enjoy a walk on the wild side at the Buttonwood Park Zoo (425 Hawthorn Street, bpzoo.org, adults $8, children $4), with lovely exhibit areas and habitats for animals as diverse as elephants, coyotes, river otters, and harbor seals—and super-helpful staff who give user-friendly talks and demonstrations throughout the day.

Hungry? Cork Wine Bar and Tapas (90 Front Street, corkwineandtapas.com) blew me away with its pan-seared scallops over sticky Jasmine rice and quirky multicultural riffs like cheesesteak spring rolls. You can order main courses, or do what we did and keep the small plates coming, happily sharing till you cry "uncle." You'll appreciate New Bedford's cultural melting pot when you tuck into traditional Cape Verdean cuisine like Shrimp Mozambique at Izzy's (72 Spring Street, 508/977-7077). Tia Maria European Café specializes in Portuguese favorites, including Portuguese-style nachos and an amazing egg-topped steak (42 North Water Street, 508/993-8900).

In the midst of all this history, the lovely, comfortable rooms at the thoroughly modern Fairfield Inn & Suites (184 MacArthur Drive, marriott.com, from $164) are a welcome place to catch some shuteye after a day of pounding the cobblestones. You'll enjoy elbow room, a spacious pool, hot tub, and fitness center, a very short walk from the historical district and harbor.