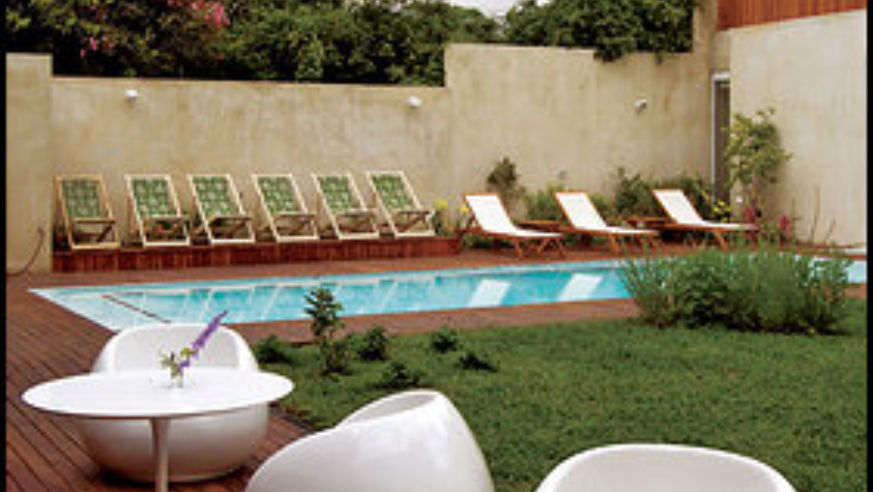 The backyard at Home

During their wedding in Buenos Aires, Patricia O'Shea, a former publicist, and British record producer Tom Rixton hatched a plan to open a hotel called Home in the Palermo Viejo neighborhood, where O'Shea grew up. Music-industry friends such as producer Flood and Nick Seymour of Crowded House pitched in with funding. The couple also got sartorial help: The staff's chocolate-brown shirts and dresses with eggshell-blue stitching were a wedding present from a friend at Burberry.

The 17 rooms have white duvets, soft rugs, vintage flowered wallpaper, and soaps from a third-generation Palermo craftsman. The couple scoured flea markets and garage sales for mid-century originals by Robin Day and Eero Saarinen reproductions. ("We source as many things as possible from the neighborhood," says Tom.)

An outdoor pool is flanked by a bar, the site of the free breakfast: fresh watermelon and grape juice, yogurt with cereal, and rolls with chocolate ganache. Later, bartender Norman Barone takes over. He makes mojitos using one of the five types of mint in the hotel's herb garden. At the downstairs spa, a 90-minute massage and mineral bath ($62) makes the cramped flight a distant memory. Honduras 5860, 011-5411/4778-1008, homebuenosaires.com, rooms from $115.