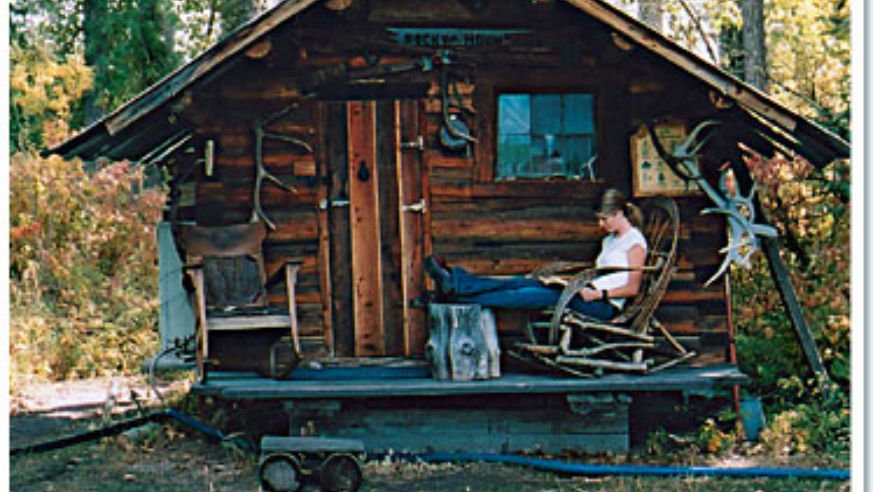 Northwest Montana has world-class hiking and rafting—not to mention huckleberry milkshakes that'll knock your boots off.

DAY 1
Glacier National Park, the vast protected wilderness area in northwestern Montana, has always loomed large in my imagination—the dizzyingly steep mountain peaks, the glaciers remaining from the last ice age, and the mountain goats, bighorn sheep, and, of course, bears. The thought of coming across a bear on a hike is actually petrifying. My friend Ellie and I will be arming ourselves with plenty of bear spray.

But we have some exploring to do in the towns before we get to the park. In Whitefish, a historic railroad community, we stop for lunch at theBulldog Saloon, which is decorated with dozens of wooden plaques depicting bulldogs (the local high school's mascot). Neither of us knows what to expect from the sour-cream-and-chive fries Ellie orders along with our burgers, but after one bite, she's hooked: "You need to taste these fries. Now."

Although we're pretty full, we can't resist a free sample in the tasting room at theGreat Northern Brewing Company, especially when the beers have names like Buckin' Horse and Hellroaring. Since there isn't a tour—you just look at the tanks and pipes through a glass wall in the tasting room—we go down the street to split a beer at theGreat Northern Bar & Grill(which has no affiliation with the brewery). We contemplate spending the day there, listening to a guitarist and drinking microbrews, but the annualNorthwest Montana Rodeoawaits in Kalispell, 20 minutes to the south.

On our way out of town, we stop atCowgirl Coffee. Ellie is delighted by all the souvenirs, particularly a T-shirt that says ONE SINGLE TALL COWGIRL, PLEASE. Outside, she sets the timer on her camera to take a photo of us on a bench with COWGIRL HEAVEN painted on the backrest.

The real-life cowgirls racing their quarter horses around barrels are the highlight of the rodeo, although we're also impressed by the bull-riding and cattle-roping competitions. After a huckleberry milkshake, we leave to find our hotel.The Kalispell Grand Hotel, which was built in 1912 and recently renovated, retains an old-fashioned ambience, right down to the plate of cookies left in the lobby for guests to snack on.

DAY 2
Charles E. Conrad is just fascinating: We're taking a tour of the house he built in Kalispell in the 1890s—now known asThe Conrad Mansion Museum—and the guide is regaling us with tales about the charismatic shipping magnate. He represented Native American tribes in a land-treaty negotiation with the British in Canada! He could communicate in several Native American languages! The house is really interesting, too, with all sorts of quirky "modern" conveniences, like a speaking tube connecting the kitchen and the bedroom, and water fountains with compartments for ice blocks to keep the water running cold. Then the guide says something that floors me: Some of the light sockets contain the original bulbs, which still work today. (They'll function until the filaments inside break.)

By the time the tour is finished, Ellie and I are itching to be outdoors. We've arranged to go white-water rafting on the Middle Fork of the Flathead River with theGlacier Raft Company. On the gentle flats of the river, I feel like I'm inA River Runs Through It. I only start to become nervous as we approach a set of rapids named the Bonecrusher, which is truly frightening in the early summer when the river swells with melting snow and ice from high in the mountains. Now, in August, the rapids aren't bone-crushingly intense, but a man in our group does go overboard. He's mortified when his 7-year-old son excitedly offers to jump in and save him from the shallow water.

At the next swimming hole, Ellie volunteers to try what the rafting guide calls the Wheel of Misfortune. She stands on the bow of the raft while the rest of us spin it in a circle until she loses her balance and falls in. The water is a beautiful green because of glacial sediments, and it looks refreshing, so I follow her lead and hit the water with a shock: It'sfreezing! I pull myself back into the raft, and another rafter starts pointing and laughing at my large goose bumps. She's apparently never seen any that big before. When we finally reach the shore, Ellie and I make a dash for our towels and dry clothes in the car.

Heading north along the outskirts of Glacier National Park, we stop at a store and shell out $50 for a can of bear spray, which is similar to pepper spray and repels bears at a distance of up to 25 feet. We plan to spend the night in the town of Polebridge, just outside the park. The word "town" is a bit of an exaggeration; it's really just a collection of cabins clustered around a 1914 general store named thePolebridge Mercantile(everyone calls it the Merc). The isolation of Polebridge is part of its appeal. Ellie and I gaze at the mountains in the distance as we sit on the Merc's porch, eating huckleberry macaroons and raspberry sugar cookies, and bonding with Zasha (a.k.a. Tripod), the resident three-legged dog.

We then walk over to theNorth Fork Hostelto check in to our cabin. The owner, Oliver Meister, has braided pigtails and a German accent, both of which strike me as unusual for the area. But it seems that eccentricities are commonplace here. "Nobody is normal in Polebridge," says a local named Crazy Davey, who has just woken up from a nap on the hostel's couch. (It seems like a good idea not to ask how he got his name.) Our cabin, Klondike Kate, doesn't have much more than a bed, a couch, and a small space heater. In the middle of the night, I make a cold run to the outhouse and realize just how far away from civilization we actually are—the sky is a thick blanket of stars.

DAY 3
Ellie and I chat some more with Crazy Davey at the Merc as we fuel up on pecan-crusted sticky buns and triple-berry turnovers before our hike in the morning. The main road intoGlacier National Park is the Going-to-the-Sun Road. It climbs to an elevation of 6,646 feet at Logan Pass in the Rockies' Lewis Range, which runs along the Continental Divide. The road project began in 1918 and took over 10 years to complete; in one part, workers had to bore a 400-foot-long tunnel through the mountainside—by hand.

A naturalist at the Logan Pass visitors center tells us how rapidly the glaciers are disappearing from the park as a result of global warming. Scientists believe there are at least 26 glaciers left, but research is being conducted to determine if there are actually fewer. The last glacier is also now predicted to melt by 2020, 10 years earlier than previously expected. We're pretty dispirited when we set off on the three-mile hike down to Hidden Lake. The scenery, however, astounds us: The pristine lake is ringed by pink and blue wildflowers, and the razor-thin ridges, or arêtes, caused by the glaciers look as if they rose out of the ground in a sudden rush.

By the time we reach theMany Glacier Hotel, a 1914 lakefront lodge located inside the national park, we're ready for bed. We pause on the porch to take in the view of Swiftcurrent Lake and the purple and blue Rocky Mountains before turning in.

DAY 4
We're up early to catch two of theGlacier Park Boat Co.'s ferries—across Swiftcurrent Lake and Lake Josephine—to tackle an eight-mile (round trip) trek to Grinnell Glacier, the most accessible of the glaciers in the park. Even though we're carrying our bear spray, Ellie and I still hoot and holler at the top of our lungs to scare away any bears as we start out on the trail. I feel a little silly, but we appear to be the first people in the woods this morning.

I can feel the glacier long before I see it; the wind carries gusts of super-cold air down the slopes of the mountain, enticing Ellie and me as we hike up the trail. When we arrive, the landscape is other­worldly. A gray-green lake of glacial melt-off lies before us, studded with huge chunks of floating ice. Beyond that is the glacier itself, which looks like a giant sheet of dirty ice. Ellie and I sit on a rock that juts into the water and eat the peanut-butter-and-banana sandwiches we brought with us. We're both wearing several layers of thick clothing, but we can still feel the chilly air against our skin. After admiring the glacier for about 20 minutes, we hurriedly scuttle down the mountain and board the ferry to go back to the Many Glacier Hotel, where our car is parked.

In Kalispell that night, we head out on the town, ignoring the fact that we have 6 a.m. flights the next day. We belly up to the bar atMoose's Saloon, which has graffiti-scratched walls and peanut shells mixed in with sawdust on the floor. As soon as we sit down, Ellie spots something odd—people are drinking beer with a reddish tint to it. "Yup, it's red beer," says the bartender, Travis. "You use a light beer and top it off with tomato juice. It's a Montana thing." He gives us a mug to try, and we're at once repulsed and fascinated by the concoction. We gamely sip the beer, which tastes like fizzy, sour tomato juice, until Travis takes pity on us and pours us ordinary drafts.

At $1.50 a beer, one round turns into many. Before Ellie and I know it, we find ourselves in a peanut-throwing contest with some locals at the other end of the bar. The stakes are another round of beer—and we win! Tomorrow won't be pretty, but, compared to Montana, few things are.

FINDING THE WAY
Only Northwest, United, Delta, and Horizon serve Glacier International Airport in Kalispell. It might be cheaper to fly to Spokane and drive four hours east. Glacier National Park's Going-to-the-Sun Road is open from mid-June to September; check nps.gov/glac for current conditions. Some sections of the Outside North Fork Road between Columbia Falls and the Canadian border are unpaved.