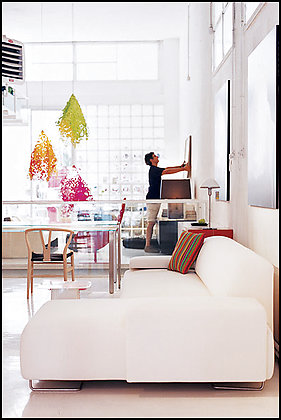 Morgan &amp; Owens
It's not easy to compete with Florence and the Vatican. But with the overhaul of one gritty neighborhood, Bologna is stepping out of the shadows.

Thanks in part to its location near the Reno River, Bologna has long been a manufacturing hub. But these days, the city is making an effort to manufacture something of a more creative nature: modern art and design.

Bologna was named a European Capital of Culture in 2000; as a result, it raised $10 million to transform a blighted neighborhood in the northwest--a 15-minute walk from the city center--into an arts hub. Up to that point, a former slaughterhouse, salt warehouse, and tobacco warehouse had stood deserted. Now, a million-square-foot area is being refashioned into a complex called Manifattura delle Arti, or Factory of the Arts.

The former slaughterhouse was gutted in 2003, then turned into the Cineteca, a center for film research and restoration. It houses the Charlie Chaplin film archives; Chaplin fans can borrow DVDs of his movies from the airy, light-filled library and watch them at screening stations that are available to the public free of charge. In a connected building are two art-house theaters named after the Lumière brothers, Auguste and Louis, who held the first public movie screening in Paris in 1895. "When we opened, they ran a film about the area," says Cecilia Cenciarelli, coordinator of the archives. "They interviewed this old man who talked about seeing a pig get slaughtered. It was incredibly funny."

Across the way, the salt warehouse was converted into a new home for Cassero, the city's gay and lesbian center. There's a disco and a backyard garden, where raucous parties take place on hot summer nights. "They're so much fun, and everyone goes," Cenciarelli says.

Art galleries, design shops, and lounges are sprouting up all around the district. Giulia Allegri, born and raised in Bologna, didn't think twice about returning after studying in Ravenna. She opened her gallery, Agenzia 04, in the Manifattura area in 2004. "I felt like something was happening here," says the petite redhead. Allegri's success attracted new businesses like Galleria Neon, which shows contemporary artists, and Metropolis Photogallery, a shop that sells furniture as well as photography. Gallery owners and visitors now meet up for drinks at Stile Libero. Nearby, a store called Fratelli Broche stocks Italian housewares, vintage clothing, and accessories. "We all go to each other's openings, and we all know and support each other," says Allegri.

Longtime friends Lenina Barducci and Maura Conti opened Zo Caffè in 2004, a couple of blocks from where Agenzia 04 stands now. "We wanted to create something that didn't exist in Bologna, a place where you can really meet people doing all sorts of interesting things," explains Barducci, a tall, skinny woman with cropped hair. The renovated warehouse is a café, late-night spot for ambient-music DJs, and art gallery. Vintage 1970s TVs serve as decoration, and the menu is written on blackboards. Young couples sit at wood tables, chatting over Prosecco and paninis.

If the film center, art galleries, and shops haven't yet put the Manifattura district on the tourist map, the city's modern art museum, MAMbo (Il Museo d'Arte Moderna di Bologna) surely will. After nearly a decade of construction, it moves into a former bakery next May.