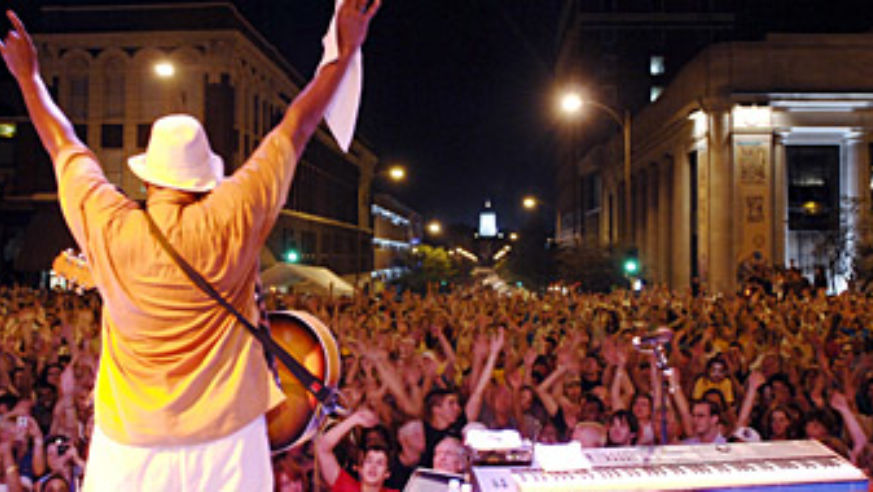 The streets of Columbia, Mo., will be smokin' this weekend for the second annual Roots 'N Blues 'N BBQ Festival, which kicks off Friday night. The free event celebrates the region's roots with two days of nonstop music and meat.

I was in the college town of Columbia for last year's inaugural festival, which drew more than 65,000 visitors. Nothing could top chowing down on a sauce-smothered, pulled-pork sandwich while a member of the Blind Boys of Alabama weaved through the crowd at Peace Park during the encore. After that, Sierra Leone's Refugee All Stars got all of downtown dancing.

Chicago bluesman Buddy Guy headlines this year's lineup, which features 28 musical acts, including bluegrass rocker Jerry Douglas and local favorite The Henry Clay Band. Event planners anticipate a crowd of 100,000, so stake out a spot at one of the three stages early, and kill time by feasting on the festivals other offerings: More than 57 BBQ aficionados will be vying for accolades in the Kansas City Barbeque Society State Champion BBQ Contest.

The perfect place to celebrate BBQ and blues alike, Columbia is sandwiched between Kansas City and St. Louis, and it's an easy drive from either side of I-70. The festival kicks off Friday at 5 p.m., and continues through Saturday night. rootsnbluesnbbq.com