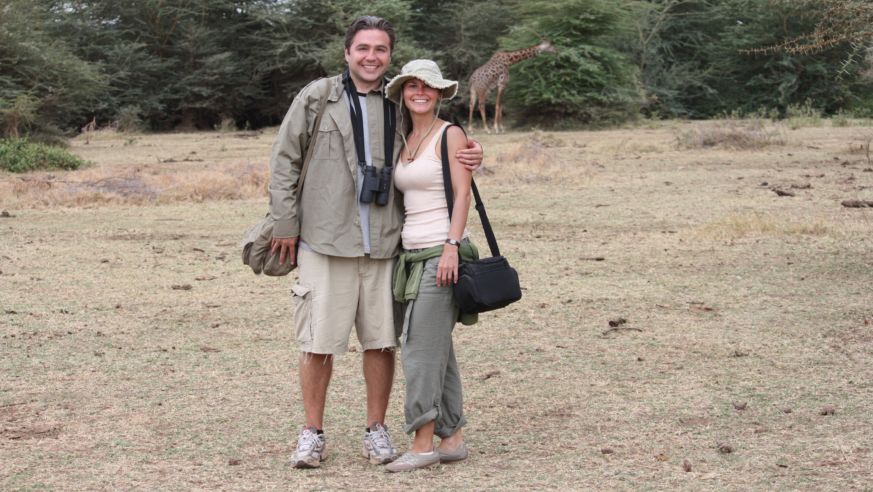 Emily and David Petrovski, of Royal Oak, Mich., celebrated their two-year anniversary and her master's degree by visiting national parks like Masai Mara and hitting the beach on Lamu Island.

Great local meal... The Moonrise Restaurant at the Lamu House hotel. We enjoyed our meal so much that we opted to dine here two of our three nights in Lamu. Dinner began with bread sticks and an avocado spread. The red and white snapper were prepared with a delectably sweet glaze, accompanied by sautéed vegetables and French fries with a garlic mayonnaise dipping sauce. We washed it all down with dawa, a traditional Kenyan drink of vodka, lime, sugarcane, and honey. Even the setting was perfect: outdoor seating along the ocean.

Our favorite part... Samburu National Reserve in central Kenya. You feel like you have the park to yourself. There were very few other vehicles on the road, and we saw many animals at extremely close range, including leopards, lions, cheetahs, elephants, giraffes and zebras. The excitement when going out on safari drives is addictive, and the challenge of seeing the big five just one more time is incredible.

Wish we'd known that... Many shops don't display the prices of products. Instead, you determine a price by bartering. Initially, we had no idea how much some of the items cost and paid a lot more than we would have toward the end of our trip. Check souvenir prices at your hotel gift shop to get a general idea so you're prepared to barter later. If a tourist is paying, even convenience stores may try jacking up the cost of a Coke or bag of chips.

Never again... We booked the trip through Sardius Tours and had an issue with our flight between Tanzania and Kenya. We wound up having to drive much more than expected. In the future, we'll make sure our tour operator gives us every detail of the trip, including flight schedules and flight reservation numbers.

Fun surprise... We had expected to be part of a group tour, but when our driver, Jabhedh, picked us up at the airport in Nairobi, we discovered that we had the van and tour guide to ourselves. We really enjoyed having the flexibility of schedule and safari drive times. We could stay and watch certain animals for as little or as long as we wanted. Jabhedh was friendly and accommodating, and we received a similarly warm welcome when we met members of the Samburu tribe.

Moment when things got tense... As we were driving back to our camp on the last day of our safari, our truck started shaking whenever the speed exceeded about 40 mph. We had a long drive back to the city to catch our morning flight to the coast. The first repair shop we tried spent a few hours taking the car apart without being able to fix it. So, at 8 p.m., the driver took it to another shop with better success. Thankfully, we made it to the airport in time for our flight the next day.

We're still laughing about... The last night of our safari (yes, the same night as above), we were woken up at midnight by loud sounds outside our tent at Crater Forest Tented Lodge. The generator had gone off at 11 p.m., so we only had the glow of a flashlight to guide our vision. There was something tearing off branches in the tall bush. I tried to convince my husband that it was the tribesman walking around the camp for security, but the very heavy breathing quickly confirmed that it was an animal. We later heard different chewing and breathing sounds on the right side of the tent. In the morning, the tribesman informed us that there had been an elephant and a buffalo in the camp that night.

Hotel we liked...Kichwa Tembo, a beautiful camp located in the northern part of the Masai Mara National Reserve. All areas of the camp offered gorgeous views of the Mara. It was so incredible to sit at the pool and watch zebras, giraffes, and wildebeests graze right in front of you. The permanent tents were wonderfully appointed, and the staff was exceptional. We especially liked that lunch was served outside, providing a closer view of the game in the Mara, as well as of the camp's resident warthogs.