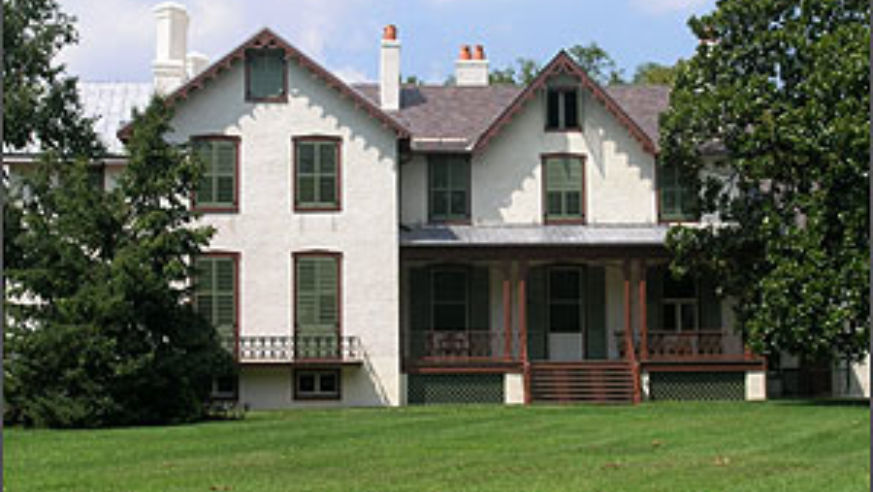 James Buchanan was the first president to spend time at the residence, but I guess even the folks at the august National Trust for Historic Preservation, who oversaw the renovation, knew enough to lead with the star attraction. The 34-room cottage retains the name of its more famous occupant, Abraham Lincoln, who summered there regularly with wife Mary Todd and family, riding his horse to work at the White House in the mornings. By most reports, his unusual height and bearing made him comical in the saddle—and large enough, portentously, to attract early assassination attempts, including one on an evening journey to the cottage that left a bullethole in his famous top hat.

Originally constructed in the 1840's, the cottage became part of a mid-19th century federal estate featuring an infirmary and numerous other residences for disabled soldiers. Lincoln Cottage has just undergone an extensive, 7-year renovation costing some $15m.

Opening day ceremonies are scheduled for President's Day, February 18. General admission tickets are available the next day. Apparently, visitors will not have free reign, so you'll have to join the small, hourly tours. If the thrill of walking the same floors as this titanic moral force in American history isn't enough, the first exhibition at the cottage will feature a signed copy of the Emancipation Proclamation-- which Lincoln deliberated at the retreat-- plus the pen the president used to sign the document, and a signed copy of the 13th amendment abolishing slavery.

In the event you're already planning a trip to D.C. for the Cherry Blossom Festival (this year it runs from March 29-April 13, official website) you might want to add Lincoln's Cottage to your itinerary—and book your lodging soon, since it's a perfect madhouse in D.C. during the festival. It'll be nice to get out of the city proper, and you'll have bragging rights as one of the first to see the cottage in its restored condition.

Tickets are $12. For more information, go to www.lincolncottage.org.