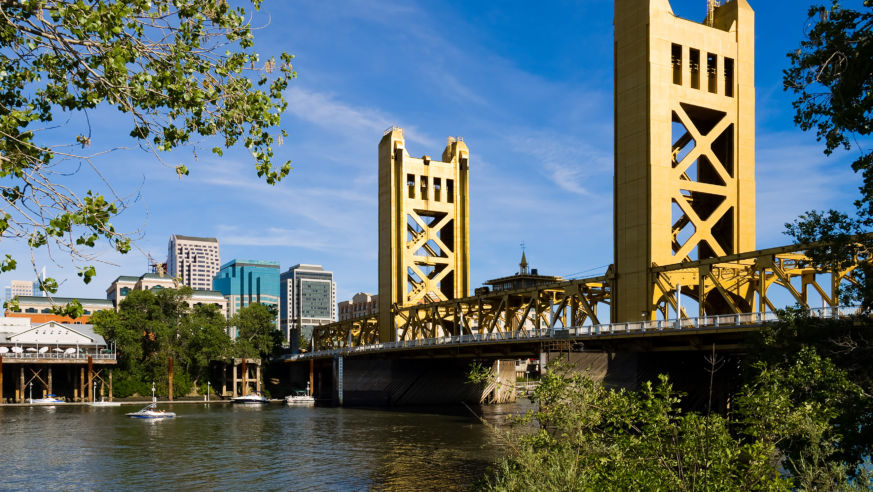 There once was a time when Sacramento was, to put it kindly, in a rut. Locals cast their gazes longingly towards San Francisco and Oakland, epicenters of creativity and culture. Then Sacramento State graduates Maritza and Roshaun Davis had an idea: give Sacramento’s creative class an outlet for showcasing their talents and watch them—and the city—thrive. Enter: Unseen Heros, the lifestyles event production company they founded.

Today Sacramento has grown into its own, with no small thanks to Unseen Heroes, which oversees year-round events like  the Saturday midtown farmers market and Gather Oak Park. Both, as they put it, are “events that make people proud of what’s here.” The couple (in life and business) also own shops specializing in California-made goods and curate a rotating pop-up market where they house their offices. Since founding Unseen Heroes in 2008, they’ve made a career out of knowing every nook and cranny of Sacramento. We recently reached them to get their inside tips on where to eat, drink, stay, and hang in the city. *Spoiler alert*: “obnoxiously delicious” ice cream, a poke bar, and unbelievable happy hour deals all factor in.

Oak Park is Sacrament's oldest neighborhood, but there are plenty of spots that are under the radar, like the retro-minded Arthur Henry’s, which bills itself as a Supper Club and Ruby Room. Without windows or signs, the only indication that it’s there is its red door. “If you’re in the mafia, this is where you wanna make your deals. There are a lot of dark, fun, strange elements to it,” says Maritza. “I don’t want to give too much away, but if you order dinner there, it’s going to come raw, so be prepared to cook.” They offer a beer and steak special for a remarkable $16 and a bourbon list that’s sure to impress.

For every steak in Sacramento there’s a slab of grilled soy meat. Andy Nguyen has an ample variety of wholesome vegetarian and vegan meals—countless permutations of noodles, rice, tofu and vegetables. Meals are generous in size and clock in under $10. If your preferences lean south of the border, La Benbita has what Maritza deems the best margaritas, made with fresh juices. The cantina is known for its festive patio and unbeatable happy hour special: two tacos and a margarita for $13.

If you’ve got a sweet tooth, you’ll have a great story to bring home after a visit to Gunther’s. The time-worn ice cream shop is an institution among locals, as evidenced by the fact that despite it being tucked away in a relatively residential area, people flock there in droves. “When you see the line out the door and down the block, you know you’re there,” said Maritza, describing the handmade ice cream and shakes as “obnoxiously delicious.”

Unseen Heroes curates and manages Gather, a culinary event that takes place on the second hursdays of each month from May through October. There are lots of food onsite--tacos, pizza, veggie fare from Mother (also a restaurant), and much touted donuts from Sweet Dozen Donuts (Get a lemon poppy seed donut then try everything else, advises Maritza). There are long communal tables where everyone kicks back and chows down. The rest of the year they curate Midtown Farmers’ Market, a culinary extravaganza in Midtown. Over 90 vendors hawk their wares, from beef jerky and sausages to balsamic vinegar, honey and wine. It's a go-to for a taste of the vibrant local culinary scene.

Not far off the freeway sits JayJay, a gallery founded in 2000 that spotlights a roster of international artists whose work spans all media. “They have a lot of fun pieces and the owners are really hands-on and engaged,” says Maritza. “they’ve been around the area for 40-plus years and they’ve helped curate different large projects. They get their hands on cool artists and they have their finger on the pulse of young up and coming artists.” After you’ve looked at art, taste some. Head down the street to Tupelo. The couple asserts it makes the city’s finest mocha, made with Mexican chocolate. Cap off the afternoon down the street with dinner at Selland’s Market-Cafe, which is known for its elevated comfort food—salads, sandwiches, pizzas—prepared with local seasonal ingredients. At select times, two dinners and a bottle of wine clocks in at $25.

Another Martiza-and-Rashaun-approved outing that’s a feast for the eyes and palate is centered in the Curtis Park, quaint with great brownstown galleries. Sol Collective is more of a community center than a gallery, but nevertheless, it’s a destination for unique shows of all media and installations by a lineup of international artists as well as pop-up shops. Additionally, Maritza and Roshaun rave about the classes offered throughout the month that anyone can drop in on: beat-making, art, and, most regularly, yoga. Fortify yourself afterwards with noodles galore at Shoki Ramen, where about $15 will get you a bowl of excellent ramen, a drink and curry on rice. As an added bonus (or, some might say, courtesy), you can order wines here by the half-glass. Wrap up the day at Gunther’s. The old fashioned ice cream shop (See above for Maritza's rave review) is a mere five blocks away.

Some people go to nature to experience a sense of place, others go shopping. Display, owned and run by Maritza and Roshaun, showcases Sacramento’s creative class with its ever-changing inventory of products made by local designers and brands, from gift items, household goods, and lots of fun stuff for kids. More recently, they opened the neighboring Damas, featuring goods and clothing for women, by women. Men have plenty of spots to shop, too, like Get a Clue, a longtime midtown retailer. They specialize in sneakers, denim, shirts, and the like, mostly by local designers. Hungry? Preservation and Co. has plenty of boutique edibles, like a house bloody mary mix, plus tons of sauces, jams and such.

Modern, funky and rich in local lore, Maritza and Roshaun recommend Citizen’s Hotel, not least because  its restaurant and bar, The Grange, has a fantastic happy hour. Steps away are two super-hip spots to eat: Empress Tavern and the very lively Mother Sacramento, a vegetarian haven. Despite its brand name, the Westin Sacramento Hotel, which sits on the Sacramento River, has a lot of character. It’s a short drive away from the hubbub of downtown, and in addition to its affordability, they note that it’s nicely landscaped, so much so that locals hang out there just for the scenery.