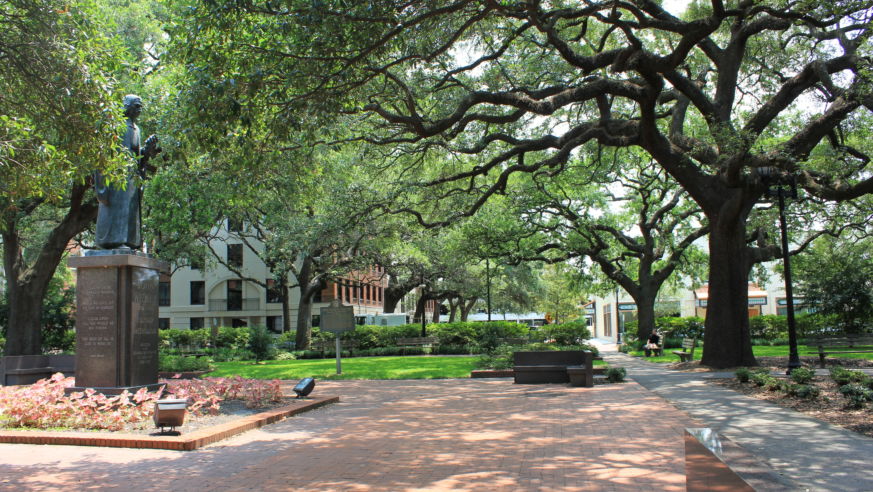 Mention Savannah to most people and they’re quick to free associate: sweet tea, riverboats, peaches, and all the other clichés. But anyone who’s known and loved the city his or her whole life is quick to scoff at those formulaic stereotypes. Ruel Joyner is one of those people who can’t resist slipping into ambassador mode when he starts talking about Savannah. You’d have a hard time finding someone whose story is more deeply woven into the city’s tapestry than Ruel’s. He’s the third-generation owner of 24e Design Co., a store that’s been operating continuously on lively Broughton Street since 1986. Moreover, his grandmother lives in one of the oldest homes in the historic district.

“If you grew up here, you can leave but you’ll be back. It really is a captivating city,” he said. “It’s magnetic. It’s center of something special. When people come visit, it’s not unusual to hear that they later move here.” We checked in with him for his advice on the most exciting things to see, do, eat, drink and stay in Georgia’s oldest city.

Savannah/Hilton Head International Airport is a bustling hub, but coming and going, Ruel says, is “the easiest thing in the world. You can swing your keys and be on valet service and get to your hotel in 15 minutes.” He describes the city as “Mayberry on steroids,” as it’s a small town and everyone knows everyone like they did in high school, but as far as American cities go, it’s an international one, not least because it’s a port city.

Ruel recommends against looking for bargains on the outskirts of the city. Savannah is a relatively undiscovered city, he says, which means it’s still wildly affordable. (“Everything is cheap, except for our taxes,” he says only half-jokingly.) Try to land a room in the Historic District. He recommends the Bohemian on the Savannah River, where you can while away hours at Rocks on the River, the hotel’s rooftop bar, and sip sweet tea and watch container ships come in. But there are plenty of other choices, they might not be as full-service, but they have no less charm. Thunderbird Inn, an exercise in retro-fabulous mid-century modern style, from the vintage décor to the complimentary RC Cola in the rooms, tops his list.

Savannah is in the throes of an urban renaissance and the culinary scene is Exhibit A. If you’re looking to splurge (and remember—Georgia splurge is different from Manhattan splurge), head to Pacci, a modern Italian ristorante at the Brice Hotel. It has a polished and modern look but a southern laidback vibe and Ruel actually helped design. The duck with blueberry sauce is not to be missed. For a little less polish, Bernie’s, is Ruel’s favorite hole-in-the-wall, not least because it looks like it could have been Blackbeard’s den. It’s a go-to for fresh oysters—steamed and raw—and shrimp that is, quite simply, “to die for.”

Savannah’s international character is captured in the dining options. CO (Thai for “feast”), will get you acquainted with Asian box pressed sushi, an unusual sushi style. (Spoiler alert: it involves tartar that’s been minced and mixed with sticky rice and pressed into a square.) The burgers at Collins Quarter are “slap-your-mama good,” he avows. If you can start your day with breakfast at B. Mathews, you’ll be treated to the “best breakfast sandwich in the world,” says Ruel. And plan to spend at least one night hanging out at Bayou Café, known for its live blues and stiff drinks. If you’re lucky, you’ll catch Eric Culberson, one of the best guitarist on the east coast, hands-down, Ruel says. “It’s as Savannah as it gets,” he says.

Savannah is nothing if not a city designed for wandering. To hear Ruel explain it, it’s laid out like a series of squares, each of which has its own mark of distinction. “They’re all like living rooms throughout the city. As you’re walking Bull Street, the spine of our city that connects City Hall to Forsythe Park, it’s like going from living room to living room. There’s music buskers, students sitting and sketching architecture, it’s a real living, breathing city of so many layers and textures. It wouldn’t be out of the ordinary to walk down Bull Street and hear five languages. It’s an international port city—people from all over the world come here and discover a European city.

Savannah College of Art and Design is one of the top art schools in the world, so little surprise that the city is fertile ground for people into the arts. SCAD Musuem of Art is the school’s affiliated museum, but the creativity is not confined to a museum here. “The whole Historic District is like a campus of the school,” says Ruel. “Whatever time of year you come to town, check and see what’s going on. There will be something tied in with the museum and its people, whether that's shops or parties. It's a big laboratory of things to do and that’s really what keeps it fresh and going."

Broughton Street is Savannah’s High Street and a wander through the shops could easily be an entire afternoon’s activity. Paris Market and Brocante (French for “flea market”) http://theparismarket.com/  is known not only for its highly curated collection of home décor inspired by the markets of Europe, but also for its café where you can pause for macaroons and the popular iced coffee while you pour over the collection of design books.

Down the street is 24e Design Co., Ruel’s store. The 11,000-square-foot space is a veritable gallery of everything from bench-made décor to one-of-a-kind historic flags and vintage gas signs to furniture made of old airplane parts. And those are just some things you might find one week. The inventory is constantly changing. Ruel has a few favorite stops for bites throughout the day. He’s a fan of Beatnix, a café specializing in creative cold-press juices, as well as Warrior One, which offers patia bowls, ultra-healthy oat/dragon fruit/honey/berries mix that’s nothing short of “life-changing.” And while you’re in the mindframe of good health, feel free to drop in for one of the classes in the attached yoga studio; they’re offered every other hour. After that, pop into the café/pub hybrid Coffee Fox  to refortify with a beer or cappuccino.

Ruel calls out the city's art museums, like the Telfair Museum in the Historic District, and the affiliated Jepson Center, which features modern art of all stripes, both very much worth the visit. The list goes on: the Ships of the Sea Museum, featuring an unparalleled collection of model ships and maritime objects in a circa 1819 home, and the Great Savannah Races, celebrating the history of auto racing in the city, which once housed a giant race track.

Savannah is worth visiting for the architecture alone, but few talk about its proximity to natural marvels like the beautiful barrier islands. Ruel recommends checking in with Wilderness Southeast or Gray’s Reef National Marine Sanctuary Foundation to learn about the many different ecological trips on offer. While you’re traveling outside the city, you’d be remiss to overlook Tybee Island (ten miles away),especially in the winter when you can relish its quiet beauty. And bring an appetite. The Crab Shack, set amid Civil War oaks, is known for its larger-than-life steamed seafood platter.