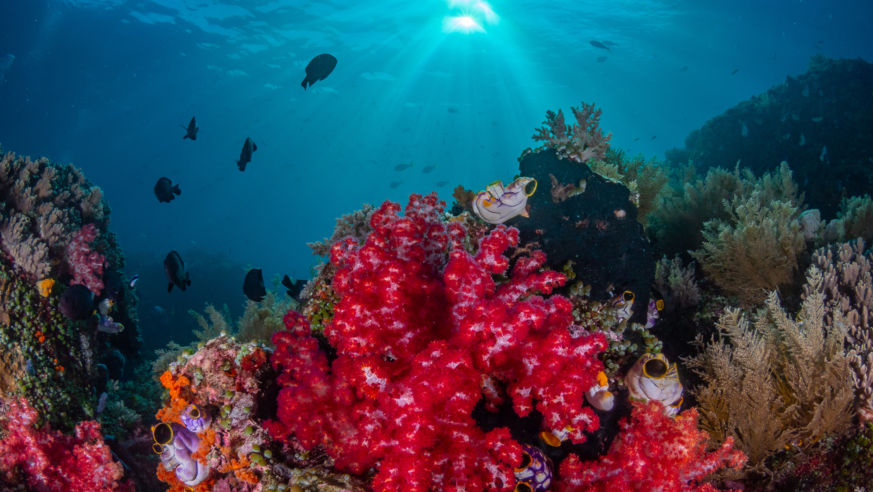 For snorkelers and deep-sea divers, coral reefs are the ultimate treasure troves. Also called the "rainforests of the sea," coral reefs are rich ecosystems that are teeming with underwater gardens, colorful rock formations, and diverse marine life.

Coral reefs are found in more than 100 countries, according to Coral Reef Alliance, a nonprofit that focuses on protecting reefs around the world.

Need a little help narrowing down your options? Here is Budget Travel’s list of the most beautiful coral reefs around the globe.

The West Bay in Roatan, Honduras

The second-largest barrier reef in the world is a must-see. Only yards away from a one-mile beach of white sand and palm trees, the West Bay is filled with canyons and crevices, hard and soft corals, and vibrant yellow and purple sea fans. It’s also one of the best-preserved coral reefs in the Caribbean.

Located at the intersection of the Indian and Pacific Oceans, the Raja Ampat archipelago is home to one of the most colorful coral reefs in the world. Fed by nutrients from deep-sea currents, Raja Ampat – the most biodiverse coral reef ecosystem in the world – is known as the “Crown Jewel” of the Coral Triangle, an area of tropical marine waters in the western Pacific Ocean.

Banner fish, parrot fish, cornet fish, and blue-spotted sting rays are just a few of the many marine animals that inhabit Egypt’s Gordon Reef. Keep your eyes peeled for sleeping reef sharks, and don’t miss the remains of the famous Loullia shipwreck, which ran aground on the northern end in 1981. Due to the shallowness of the water, the luminosity is exceptional.

Also located within the Coral Triangle, Papua New Guinea’s coral reef is dominated by stunning, rainforest-covered volcanic peaks that rise steeply from the water, some reaching over 2,000 meters above the surface. Spadefish, jacks, and barracuda roam the waters of these colorful corals. In addition to checking out the area’s diverse marine life, visitors should view some of Papua New Guinea’s aviation wrecks from World War II (the area sustained heavy Allied bombings), which are easily viewed through the Bismarck Sea’s clear blue waters.

Luminescent corals are the prized possession of Fiji’s Rainbow Reef. Home to millions of beautifully colored reef fish and sea anemones, these waters are brimming with 300 types of hard coral. Fiji is particularly famous for its butterfly fish, and the entire 27 species can be found swimming in Rainbow Reef, which is also home to Taveuni’s Great White Wall, a world-class dive site composed of soft, white corals and colorful sponges that stretches down about 25 meters below the water’s surface.

One of the best year-round diving destinations in the Indian Ocean, the Maldives is also one of the most intricate marine ecosystems on the planet. The archipelago attracts more than 1 million tourists a year, and for good reason: its chain of 26 coral atolls are, put simply, a tropical paradise bursting with fish life, including manta rays, sea turtles, and giant clams.

The caveat? Since 2014, the Maldives have experienced widespread and, in some cases, severe coral bleaching as a result of rising sea water temperatures. The upshot: a number of marine life preservation organizations have banded together to address the reef’s coral bleaching issues.

The Great Barrier Reef in Australia

The world's largest coral reef is one of the most sought-after tourist destinations around the globe. Indeed, it’s one of the seven wonders of the natural world. Its sprawling reef system, which stretches over 1,400 miles, supports a range of marine life, including endangered species like dugongs and green sea turtles. The Great Barrier Reef also contains more than 400 types of coral and around 240 species of birds.

Apo Reef in the Philippines

Spread over 13 square miles, Apo Reef is the world's second-largest contiguous coral reef system. The channel is home to about 300 species of colorful marine life –including tropical aquarium fish, snappers, and yellowmargin triggerfish – and roughly 450 species of coral. Its pristine waters make for ideal snorkeling and scuba diving.

The Hawaiian Islands is home to more than 410,000 acres of coral reef in the main islands alone. Its clear waters feature over 500 species of algae and a dazzling array of colorful marine life, including the Humuhumunukunukuapua‘a, a triggerfish that is Hawaii's state fish. One-quarter of its marine life is endemic to Hawaii, meaning they can’t be found anywhere else in the world.