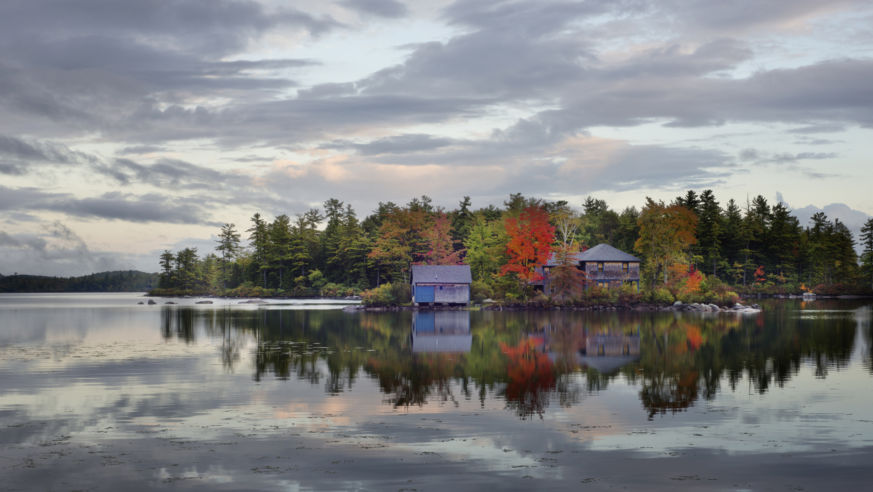 Years ago, a father and son spent two summers by the lake in New Hampshire. Now they're back for the foliage and a near-vertical train ride you shouldn’t miss.

DAY 1
When I was a kid in the 1970s, my family visited our friends the Stewarts a couple of years in a row at their house on Lake Winnipesaukee in New Hampshire. The lake was paradise for a young boy—my days were filled with swimming, sailing, and trips to the ice cream shop. My dad's most enduring memory of those trips is not nearly as idyllic. He was standing in the Stewarts' sailboat one summer when the boom came loose and smacked him in the face, breaking his nose. The silver lining: At least when we got home, the doctor didn't have to break his nose again—it set straight on its own.

Thirty years later, my dad, also named Tom, and I are revisiting some of our favorite spots from those summers, including Lake Winnipesaukee—although we definitely won't be doing any sailing this time around. After flying into Portland, Maine, from our respective homes, we drive south to Portsmouth and grab a bite to eat atGilley's PM Lunch, a food stand from the 1940s. Despite the fact that the rusted truck at the front end looks like it's seen better days, the clam chowder, burgers, and extra-crispy French fries are excellent.

Heading northwest, we make a detour in Barrington to taste the cheeses atCalef's Country Store, an almost-too-cute shop dating back to 1869 with a wide front porch and old wooden floors. Most of the store's cheddars are aged for one to three years, with the exception of the "four-year-old cheese," named after a block of cheese that got lost in the cellar and accidentally aged for that long. Just as I'm about to make a purchase, I realize that the cheeses probably won't age as well in the trunk of my car for four days. Luckily, Calef's ships; I decide to place my order when I get back to New York.

New Hampshire is filled with touristy places like Calef's that seem as though they've been around forever. But one of my favorite childhood haunts is long gone. After we search the town of Wolfeboro for the Hansel and Gretel Shop, where my sisters and I used to try to win prizes by catching plastic goldfish in a pond, a local tells me that it was actually located in nearby Melvin Village and closed years ago. It's just as well. I might have looked silly holding one of the miniature rods as an adult.

Dad and I check in toThe Lake Motel, an old-fashioned inn with a huge backyard and private beach on Crescent Lake right next to Lake Winnipesaukee. Then we hurry over toCastle in the Clouds, a historic mountaintop estate, before it closes. The house was built in 1914 for Thomas Plant, a millionaire shoe manufacturer, and it has a lot of really unusual details, like indoor fire hydrants and a central vacuuming system. The views are also incredible, which makes the property a popular spot for weddings. A ceremony is happening while we're there, but we're not dressed well enough to crash it. Besides, my dad has better manners than to do that.

DAY 2
Now that he is retired, Dad has a motto: "Every day is Saturday except Sunday." This weekend, even Sunday is a Saturday because I have no idea where to find a church here. Instead, we opt for two breakfasts. First, we stop at theYum Yum Shop, where Dad and Mr. Stewart used to go for raspberry tarts. Although the store has moved since the '70s, it still sells them. "I think maybe they were better before," Dad says after biting into a tart.

Having admired Lake Winnipesaukee for two days, Dad and I are anxious to get out on the water, so we buy tickets for a ride on one of theMount Washington Cruises. The ship is enormous—it's 230 feet long and carries more than 1,000 people on four decks—but the views of the fall foliage are even more impressive. The colors of the leaves are nearly at their peak, making us glad we picked October to visit.

Back on land, I'm finally able to feel like a kid again at an arcade near the dock,Half Moon Amusement Arcades. We're too late in the season for the bumper cars, but I happily while away some time playing old-school video games like Paperboy. I don't abandon Dad for long, though. I used to be good at these games (I swear!), but I'm not anymore. My quarters are gone in a flash.

In the afternoon, we take the Kancamagus Highway, or the Kanc, through the White Mountain National Forest toward Bretton Woods. We're staying at a motel calledThe Lodge, which is across from the Mount Washington Hotel, a grandiose estate where the Allied nations signed agreements in 1944 creating the World Bank and the International Monetary Fund. (Guests can stay the night there, too, although the rates are really expensive.) Our dinner later that night atFabyan's Station Restaurantis a bit disappointing, mainly because Dad is peeved that the guy at the next table gets the last order of pot roast. He settles for the salmon in lemon sauce—a poor substitute for a man with meat on the brain.

DAY 3
Although there's a free, guided tour of the Mount Washington Hotel this morning, we decide to bypass it because we want to take a ride onThe Mount Washington Cog Railway. To say that the rail line to the top of nearby Mount Washington is the highlight of the trip for my dad is an understatement. "Anyone who comes here and doesn't ride the train is crazy," he says afterwards. I suppose that if I can get excited over obscure video games from my childhood, he has a right to feel this strongly about a train ride.

Built in the late 1860s, the cog railway was the first in the world to be able to climb a mountain. The coal-fired locomotive pushes the passenger car up the mountain very slowly—at a speed of about three miles per hour. Both the locomotive and the passenger car also have brakes to keep the train from speeding out of control on the way down. Dad is fascinated by the train's history, especially the fact that it's known as the "Railway to the Moon" because a state lawmaker deemed the project so foolish during the planning stages that he said the builder should be given a charter to extend the railway all the way to outer space.

TheLittleton Dineris the most fitting place possible for us to eat lunch after our morning ride: It's a train car transformed into a restaurant. The 1930 Sterling Steamliner diner car has old wooden benches and the original arched ceiling, which keeps the narrow space from feeling cramped. I order the Reuben, and Dad has a hot dog with a side of homemade baked beans. While the food is just OK, the waitresses' T-shirts are truly memorable, with a philosophy for good living on the backs: EAT IN DINERS. RIDE TRAINS. PUT A PORCH ON YOUR HOUSE. SHOP ON MAIN STREET. LIVE IN A WALKABLE COMMUNITY. Littleton pretty much fits the bill.

We take a leisurely drive back to the Lake Winnipesaukee area and find a room at theBoulders Motel & Cottagesin Holderness. Then the two of us get down to some serious card playing in our screened-in sitting room. Cribbage is more exciting to us than the cog railway ride and the arcade combined. Since Dad taught me the game when I was in high school, I've gotten a lot more practice at it than he has, but filial piety prevents me from revealing who usually wins.

We play a couple of games and then go in search of dinner down the road atWalter's Basin, a restaurant on the shore of Little Squam Lake whose claim to fame is that it was in the filmOn Golden Pond. We sit by one of the huge windows inside and gaze out at the water, wishing we could eat every meal on a lake (or on a pond, for that matter).

DAY 4
I'm surprised that after all this time in the New Hampshire countryside, we haven't really seen any wildlife. In an effort to remedy that, we take a morning stroll at theSquam Lakes Natural Science Center, where a number of species that are native to the state, such as black bears, bald eagles, red-tailed hawks, and mountain lions, are kept in fenced-in wooded areas along a pleasant path. The majority of the animals are either orphaned or injured and are not able to survive on their own in the wilderness. Interestingly, the science center doesn't have moose, because they don't do very well in captivity. Instead, there's a life-size sculpture of one.

I've planned one last stop in Portsmouth: a self-guided tour of theUSSAlbacore, an experimental nuclear submarine built in the 1950s at the town's Naval Shipyard. But on the way, I start to have second thoughts about whether this is a good idea. My dad has a low opinion of subs after 20 years in the Navy, and setting foot on one might be the last thing he wants to do. I'm relieved, however, when he says he's game for the tour. And he even serves as a guide, telling me all about how subs are built and how this one differs from those still in operation.

I enjoy listening to his stories from the past, especially those about our summers here. Our trip back 30 years later has been eventful, too, despite the fact I didn't win any prizes from the goldfish pond and Dad didn't wind up with a broken nose.

FINDING THE WAY
Manchester is the more convenient city to fly into, but Portland, Maine, can be cheaper. One of the most scenic drives is on Route 11, which hugs the southern shore of Lake Winnipesaukee.