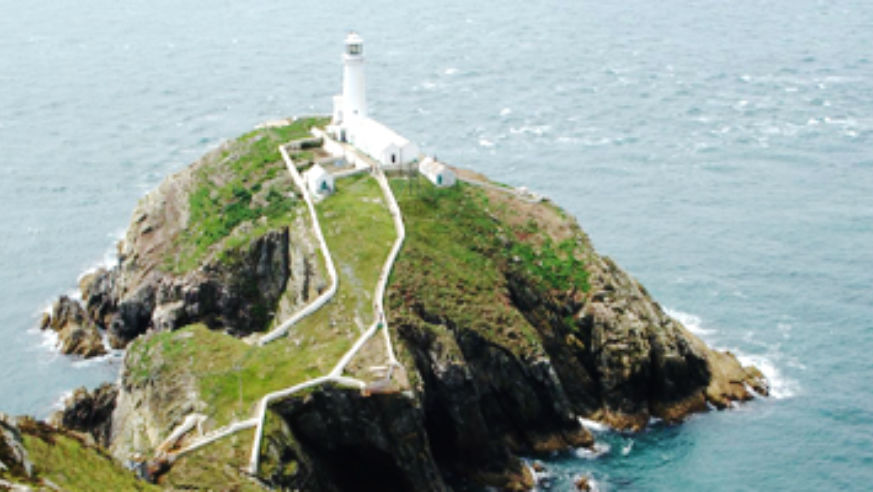 The newly opened Wales Coast Path connects the nation’s entire coastal perimeter—a first for any country. At 870 miles, it’s no walk in the park, so try one of these easy–on–the–feet day trips.

When Kate and William tied the knot, they named the 30 tables at their reception dinner after their favorite places. The village of Rhoscolyn, on Holy Island at Wales’s northwestern corner, made the list. It’s easy to see why: This rugged stretch of the path leads past sea arches, tidal pools, and an 1809 lighthouse with views of Ireland.

Where to Stay: The Edwardian Ingledene B&B, which offers bay views. Ravenspoint Rd., Holyhead, ingledene.co.uk, from $103.

With its dramatic cliffs and “folded rock” formations, it’s no wonder the Ceredigion coast has inspired its share of poets. In the 1940s, Dylan Thomas lived—and drank—in the seaside resort of New Quay (where a bar fight at the Black Lion pub led to shots being fired). Offshore near the harbor wall, the dolphins also drink like fish, but then again, they’re supposed to.

Where to Stay: The three–suite Wellington Inn, where the restaurant serves Welsh lamb and seafood fresh from the bay. Wellington Place, New Quay, wellingtoninnwales.co.uk, from $110.

The southwest coast has always been a favorite stop for invaders, from the Romans to the Vikings. Starting in Newport, hikers head west past Celtic monuments to Fishguard, where a 100–foot tapestry immortalizes France’s failed invasion of the town in 1797. Don’t miss the lighthouse at Strumble Head, which looks out onto the shipwreck–prone sea.

Where to Stay: The cottage–like Glanmoy Lodge Guest House, where the owners set up nightly badger feedings. Tref-Wrgi Rd., Goodwick, glanmoylodge.co.uk, from $102.

You might say it’s all uphill from Solva. In Pembrokeshire Coast National Park, which turns 60 this year, more adventurous climbers tiptoe around nesting seabirds and wildflowers and follow the steep path to the Gribin, a rocky ridge topped with an Iron Age settlement. Reward yourself with a pint in the 6th–century cathedral town of St. David’s, one mile inland from St. Justinian’s chapel ruins.

Where to Stay: The seven–room Grove, which has a charming back patio. High St., St. David’s, grovestdavids.co.uk, from $95.

You’d never suspect that the land west of Llanelli hasn’t always been this pastoral. But before the 10–mile Millennium Coastal Park revitalized the area, in 2000, this stretch was cluttered with derelict steelworks. Now the horizon features replanted reed beds, wild orchids, and beaches that attract over 100,000 wading birds.

Heading east along the surfing beaches of the Gower Peninsula, you’re treated to a tour of the country’s windswept castle ruins. Beginning at Oxwich’s Tudor–era manor house, continue past the remains of Pennard Castle, perched above Three Cliffs Bay. Just west of Swansea, the town of Mumbles contains the grandest gem, the largely intact, Norman–era Oystermouth Castle.

Where to Stay: The Langland Road B&B, a restored Victorian villa. 17 Langland Rd., Mumbles, langlandroad.co.uk, from $95.

The World's Most Beautiful Castles

6 Foolproof Tricks for NOT Embarrassing Yourself in a Foreign Language