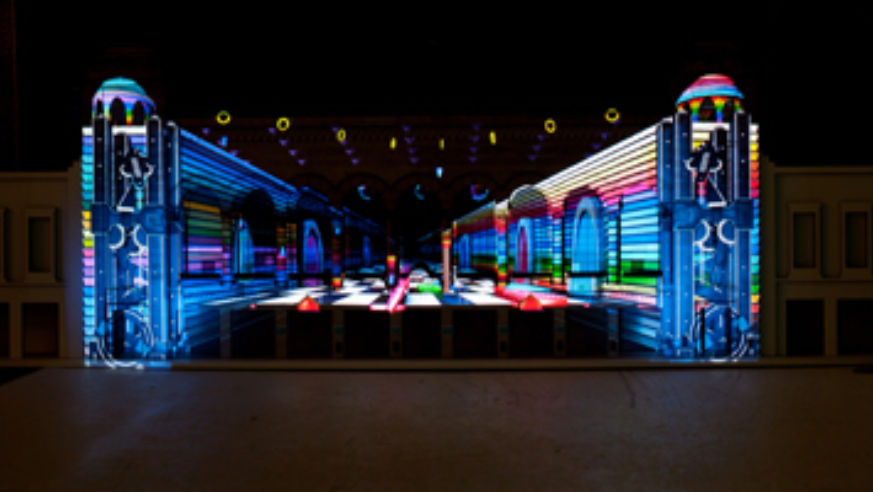 Starting July 4th, Atlantic Citywill flaunt its latest attraction, a high–tech 3D sound and light show featuring state of the art visual effects by The Moment Factory and an original score by composer Vincent Letellier. The show will take place twice an hour beginning at dark and lasts eight and a half minutes. Best seen from Kennedy Plaza, the show is free and open to the public, projected onto Boardwalk Hall (formerly known as the Atlantic City Convention Hall), and can be seen from the Boardwalk, beach, and from as far away as Caesars Pier. The 3D sound and light show is part of a five–year tourism initiative by The Atlantic City Alliance, a move to introduce more interactive public art displays to the city that also double as free and family–friendly attractions.

“While the world's great museums showcase art for appreciation as well as scholarship, moving art outside to the blank canvas of the sky, the ocean and the historic Boardwalk here in Atlantic City can be a catalyst to evolve how people think about our city," said Liza Cartmell, President of the Atlantic City Alliance. "Atlantic City has long been known as a place that pushes the limits to showcase the new and the unique and this is just one more example consistent with its history of innovation".

Here's a short video clip about the making of the Sound and Light Show, with a sneak peak of the kinds of visual special effects in the show, including one that gives the appearance of the building crumbling before your eyes, only to have it reappear with a new lit up, futuristic look. Everything you'll see in the show celebrates Atlantic City's past, present, and future, and all the things that make it a memorable vacation spot.

For those of us on the east coast, Atlantic City is relatively easy to get to—it's about an hour ride from Philadelphia, a 2.5 hour drive from New York City, or a 3.5 hour road trip from the Washington D.C. area. You can also use New Jersey Transit to get to and from Atlantic City—there's an express bus that departs from Port Authority, Newark, Jersey City, and Atlantic City for $39 round–trip—and budget buses like Greyhound's Lucky Streak Service and Megabus offer cheap rides for roughly $15 to $50 round–trip depending on which city you're coming from.