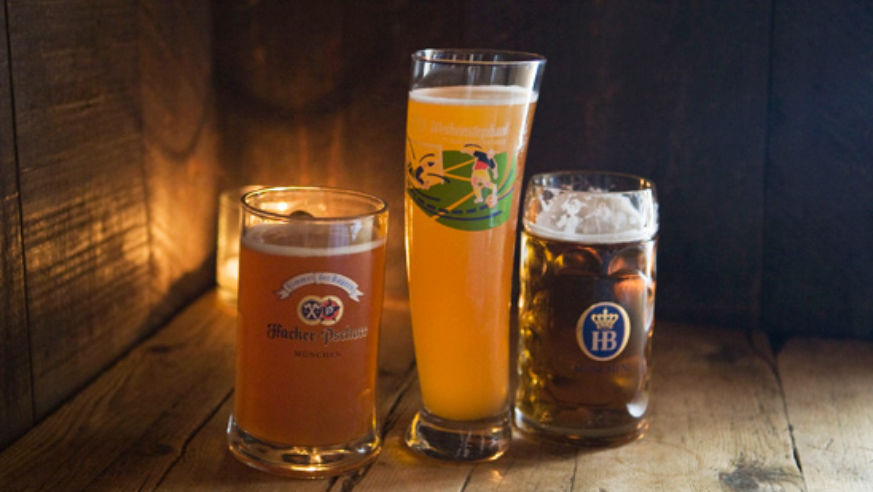 Where better to while away the afternoon than a communal table at one of these beer halls and gardens, from an old-time Bohemian favorite to a newcomer with all-Asian brews.

The tables and benches fill up quickly inside Loreley Restaurant & Biergarten, a Lower East Side mainstay, whose stripped-down aesthetic sticks to exposed-brick walls, a planked floor, and no kitsch. Even more desirable is a spot in the patio-like garden in the back, where the concrete walls are brightened with planters. Don't come looking for the newest microbrew from the East Coast: The draft and bottle list here is German-only. Try one of the two smooth, light Kölsches, which—like the owner—are from Cologne. They're served in traditional narrow glasses that hold about seven ounces (200 mL). 7 Rivington St., 212/253-7077, loreleynyc.com, beer from $3.

Michael "Bao" Huynh, who presides over a growing Vietnamese restaurant empire, brings a little bit of Southeast Asia to the Lower East Side with beer garden, Bia. Enter by navigating a facade that still looks like a greasy takeout joint—and come ready to quaff. The options on the all-Asian beer list are delivered in ice-filled metal pails in batches of six, 12, or 24 bottles. Seafood reigns on the street-food-inspired menu; the shrimp summer rolls ($7) and red snapper in a tamarind sauce pack a flavorful punch ($18). 154 Orchard St., 212/780-0010, beer from $4.50.

Hallo Berlin takes the beer garden indoors, with picnic tables, flags, and pennants from all over Germany, and a bar with half-liter steins and one-liter glasses at the ready. The Radeberger pilsner is a rightfully popular choice. Requisite sausages like Currywurst and brats are represented, but save some room for the piquant sides, namely the potato and pickled cucumber salad. The actual garden out back is small and fills up quickly as workers make their exodus from Midtown's office towers and locals stop by to shoot the breeze over some wurst. A smaller "express" branch is a few blocks away, on 9th Avenue. 626 10th Ave., 212/977-1944, halloberlinrestaurant.com, beer from $5.

Come early to Zum Schneider, a never-deserted corner in the party-hearty East Village—it's especially hopping during soccer matches and on weekends, when an exuberant, preppy crowd sits for hours enjoying German brews and sharing plates of schnitzel, spaetzle, and sausage. If you're in the mood for something mild, opt for a Radler (cyclist), a refreshing mix of lager beer and lemon-lime soda that will keep you road-ready (half-liter $5, one liter $10). 107 Ave. C, 212/598-1098, zumschneider.com, beer from $4.

Bohemian Hall & Beer Garden is a living relic from the early 1900s, when New York's population swelled with Czechs, Germans, and Slovaks, who made beer gardens an everyday part of city life. Still owned and operated by its founding Czech-Slovak benevolent society, the beer hall keeps the Mittel-European vibe intact with live music and waitresses able to lug an impressive number of steins of Staropramen, a popular Czech beer on tap. Guzzling post-collegiates pack the garden's picnic tables late into the night. 29-19 24th Ave., Astoria, Queens, 718/274-4925, bohemianhall.com, beer from $5.

When beer halls start to seem too rowdy and loud, head to much calmer Vol de Nuit in Greenwich Village. Although the bare-bones, redbrick courtyard and its metal café chairs and tables won't win any design awards, Vol de Nuit's distance from the street makes it a serene locale for sipping one of the Belgian beers that pair amiably with the mussels and fries—the only things on the menu. The bar's interior is decorated with a pressed-tin ceiling, hurricane lamps, and a small bar cozied up against a back corner and dimly lit with bare red lightbulbs. It's all quite soothing. After a few sips, you could imagine yourself transported to a sleepy side street in New Orleans's French Quarter. 148 W. 4th St., 212/982-3388, voldenuitbar.com, beer from $6.