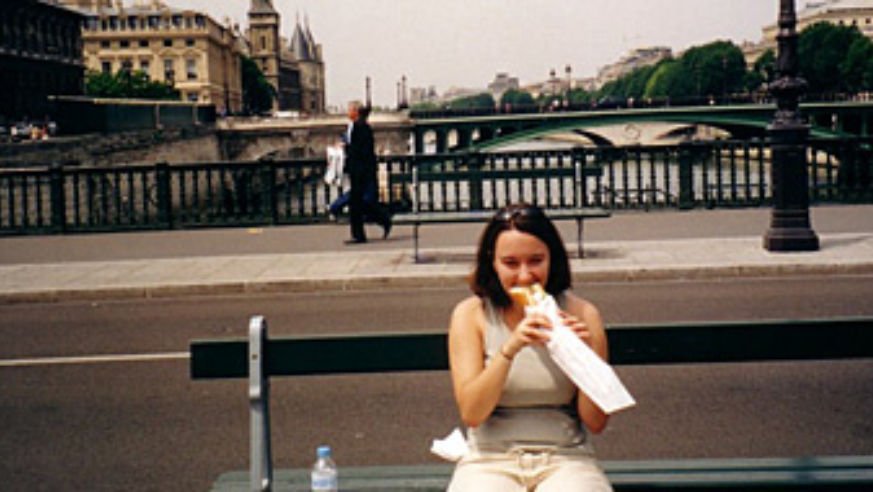 Once practically unheard of, sandwiches have become increasingly popular in France. About 5 million of them were downed last year, an annual jump of 11 percent, according to an AFP wire service report. Baguette sandwiches are favored two-to-one over hamburgers.

The French are finding it increasingly difficult to justify the time and expense of a sit-down lunch. Restaurant groups say that the sit-down trade has plummeted by about 20 percent, while "le sandwich ne connait pas la crise"—the sandwich knows no crisis.

A more optimistic explanation for this migration is that French sandwiches are getting better. Years ago, the offerings of the average baker included jambon beurre (ham and butter), jambon fromage (ham and cheese), and crudité (meat dressed with lettuce, tomato, hard-boiled egg and a half-gallon of mayo). These choices were sometimes salvaged by the star quality of the baguette, but on the whole they left the repeat eater uninspired. My French friend Caroline had nearly given up on the genre, finding sandwiches altogether "too depressing."

She and her compatriots are beginning to come around now, seduced by a slew of interesting options. What you'll find at the average corner bakery today is much more creative than even five years ago. This is great news for travelers who only want to take a short break between monuments. While the options are much-improved across the board, some of my favorite hand-held lunches have been perfecting their craft for a few years:

• Cosi (54 rue de Seine, 6th arrondissement) With its unhurried pace and opera music, this left-bank shop bears little resemblance to the American chain it inspired. Sandwiches like the "Ines" (ricotta, walnuts and Parma ham) are made outstanding by fresh hot focaccia. Need a place to nibble? The Square du Vert Galant—a triangle-shaped park just below the Pont Neuf—is a calm oasis in tourism central.

• Coquelicot (24 rue Abbesses, 18th arrondissement) This bakery in Abbesses is famous for their Piccola baguette, and the pear-walnut-Roquefort sandwich makes me swoon. I take my lunch over to the lawn sloping down from the Sacré-Coeur—it's a great place to gaze out at the city.

• Eric Kayser (87 rue d'Assas, 6th arrondissement) Widely regarded as one of the top bakers in the city, Kayser makes feast-worthy sammies on stellar fresh bread. Combined with a dessert from his renowned pastry kitchen, it's a steal for only €7 ($8.75). Walk your treasures over to the Jardin Marco Polo where you'll find a pretty fountain and plenty of benches.