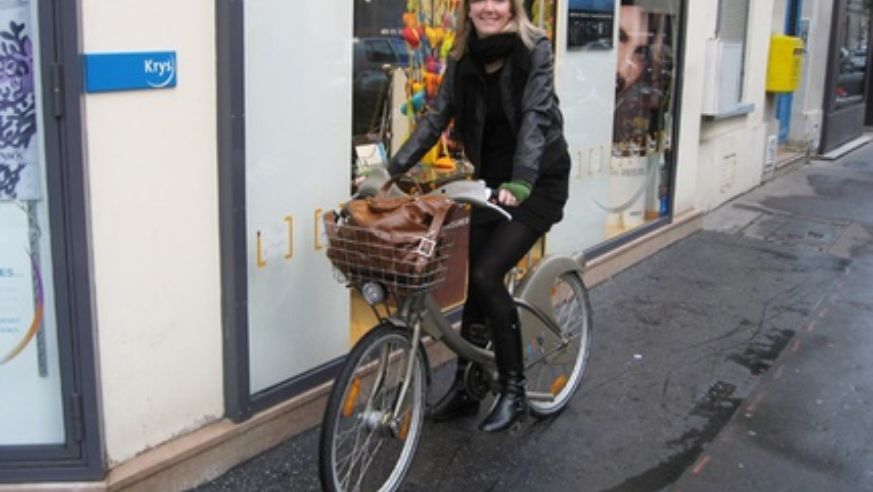 Courtesy Sara Morrow
Me, testing out the old adage, "it's just like riding a bike" during our very first rental. I hadn't biked in probably a decade, and shockingly, I never saw a single biker wearing a helmet in Paris. Scary!

In Paris last week, my fiancé and I really felt as if we were living like the locals. We sipped our espresso at the bar each morning and strolled hand-in-hand through the Luxembourg Gardens. But the most fun—and possibly most Parisian—thing we did was to crisscross the city using Vélib, which roughly translates as "free bicycle." (It's a euro per day for a subscription, and any rentals under 30 minutes are free.)

The city is utterly different when viewed on two wheels. We felt especially chic on the day we filled our little chrome bike baskets with Clementines from the market on Rue Mouffetard.

Earlier this year, my colleagues at Budget Travel recorded a video of how to rent a bike in Paris.

But I learned some additional lessons while cruising around.

• Tip: When a bike is defective (because its gears won't shift or it has some other flaw), a Parisian will typically turn its seat backwards as a signal to others not to use it.

• Try your AmEx card. This blog has previously reported that most American credit cards don't work at Vélib kiosks—the stands at each station that unlock available bikes. The typical European credit card has a microchip rather than a magnetic strip, but lucky for us, American Express Blue cards run on the chip system. On our first morning, we signed up for a one-day subscription in minutes using our AmEx Blue.

• Take the road less traveled by staking out a non-conventional route. We were staying fairly far down on the Left Bank, and each morning we'd bike up to the river, only to be met with Vélib stations that were at capacity. If all the spaces at one station are full, the kiosk screen will direct you to the nearest station with open spots, but we found this information wasn't always accurate. More than once we trudged from station to station looking for two spaces—a slightly deflating way to end an otherwise exhilarating ride. It seemed like most bikes were ditched at stations lining the river, but if you can start there and bike outward, you're sure to find plenty of working bikes and end with plenty of empty spaces.

• Think about Vélib rush hour. It seemed like the times we were looking to turn our bikes in—typically right around the time sidewalk cafés started to fill up—everybody else was returning their bikes, too.

• Parts of the city (around Canal St. Martin and down toward the Bastille, for instance) have gloriously divided bike lanes that are scenic and peaceful. In other parts of the city, though, one-way streets and bike lanes that double as bus lanes make it hard to get around. On one trip, we were yelled at by a French grandma and nearly barreled down by a bus. Let's just say that from then on, we mapped out our trips beforehand. As noted in Budget Travel's video, you can download a free map of the Paris bike routes.

Video: How to bike in Paris