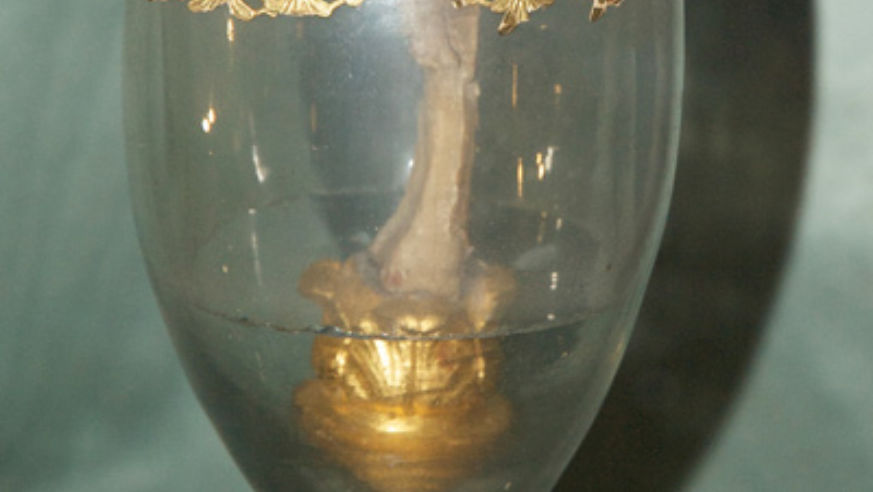 Galileo left a lot to posterity: The telescope, the laws of motion, and our understanding of the nature of planets and their satellites all owe some debt to his genius. But if you want still more from Galileo, now there's more.

In 1737, while Galileo's body was being prepared for a move to Florence's Basilica of Santa Croce, various anatomical relics were pried from the corpse. The New York Times reported that "enthusiastic admirers" made off most notably with a few of the astronomer's fingers. (I hope my admirers are less enthusiastic, when the time comes.)

One withered finger, a ghastly-looking thing that bears more resemblance to a twig than to a proper digit, eventually found its way into a display at the Institute and Museum of the History of Science in Florence. Other body parts went missing, but were recently recovered after a collector purchased them at auction and subsequently verified their authenticity.

So Galileo's long-lost thumb, finger, and tooth will join the museum's collection in the near future. For those of you counting at home, that will unite three of the scientist's fingers, all from his right hand. I can find no definitive news on the condition of the newly recovered body parts.

Galileo is perhaps most famous for his run-ins with the Catholic Church, largely over his contention that the sun was at the center of the universe, a notion that ran contrary to biblical understanding. Unwilling to fully distance himself from his heresy, he was tried by the Inquisition and served 8 years under house arrest. What gives a guy such chutzpah, such backbone? You can view a piece of his vertebra at the University of Padua—the last of the known body parts removed in 1737—and come to your own conclusions.

Note: The museum's website says that it is currently undergoing renovations, though a "significant selection" of the permanent collection is still on public display on the ground floor. Renovations should be complete by Spring 2010, about the time the recovered body parts will go on exhibit.