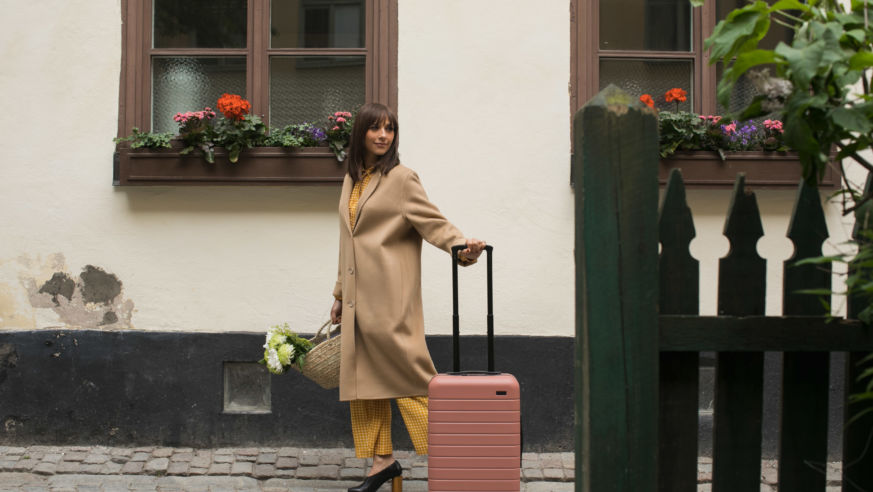 Want a suitcase that stands out at baggage claim? Rashida Jones’s collection of Scandinavian-inspired luggage comes in a pretty color palette, with packing cubes and a smartly engineered tote to match.

Rashida Jones knows a thing or two about globe-trotting. In addition to fulfilling the press-junket duties required of an in-demand actor, writer, and Emmy-nominated producer, the Angie Tribeca star serves as a voice for the International Rescue Committee, visiting refugees in camps in Lebanon and Thailand and in cities such as San Diego and New York as they put down roots. Her time on the road inspired a desire to design luggage that would help relieve the pressures of traveling—and add a measure of whimsy to the process. “Anybody that’s been to a major international airport in the last five years can attest to the fact that it can be really grueling to travel,” she says. “I loved the idea of being able to bring some magic into something banal.”

Enter: her new collaboration with Away, the minimalist brand beloved by models, actors, and social-media darlings alike for its lightweight, tough-shelled, stylish suitcases. (Perhaps the ubiquitous millennial-pink edition popped up in your Instagram feed?) Cleared to fit the overhead bins of all major airlines’ planes, each Away carry-on comes equipped with USB ports powered by a rechargeable, removable, FAA-, TSA-, and DOT-approved battery; the suitcase’s polycarbonate exterior, here available in a trio of muted pastels, also comes standard. As batteries aren’t allowed in checked baggage, the bigger versions have other perks—namely, an interior compression system, a built-in lock, and, Jones’s favorite, a removable laundry bag.

Rounding out the line are flexible packing cubes in coordinating colors (Marie Kondo disciples, rejoice!) and, perhaps the star of the show, a vegan tote that can slip over the handle of a carry-on when you’re not wearing it crossbody. Jones personally designed the bag for easy access to the necessities, from water bottle to plane ticket. “I wanted to create the perfect tote that was just big enough to fit the smallest computer, but not so big that it was going to break your back when you picked it up, or fall off your luggage when placed on top,” she says. “It was about completing the experience of having an efficient travel day.”

At $225 for the basic carry-on, this luggage doesn’t come cheap, but Away delivers value by eliminating retailers’ markup and selling directly to consumers, backing its “unbreakable” promise with a lifetime guarantee (batteries not included—those are subject to a two-year warranty). For Jones, whose bucket list currently includes South America and Australia, the collab provides a comprehensive travel experience. “I love that you can use everything in the collection in several different ways,” she says. “For me, it’s just about having enough components that you can put together so that you feel like you’re being taken care of during your trip.” Sounds like a bargain.